When we last talked to Beverly Johnson (a.k.a. Bevlove), in May, she was working on tracks in the studio. Now, she's just about ready let us all in on the fruits of those sessions with the release of a new song, "Obsession," on October 24, as the lead-up to a future project.

Bevlove is a young songwriter and R&B singer making passionate electronic music that can be lush and dreamy or powerfully danceable, with hip-hop and old-school soul influences. With her beautiful voice that commands the productions it's laid over, Johnson is bursting with potential. Lately she's been listening to J*Davey and Bilal, a mix of electronic and classically soulful music When we tell her that her music reminds us of Miguel, she eagerly welcomes the comparison. "Kaleidoscope Dream, that defined my whole year," she says.

It's clear that Johnson would love to have her music played on the radio and heard by millions, but she's also fiercely uncompromising with her artistry — two ideas that often stand in direct opposition. "I don't want to change my sound to fit on the radio," she says. "So if that's what it takes, then if I don't make it, that's OK." Johnson's unsure if she would ever sign to a major label, worrying about the compromises she might have to make. "I would have to remain myself," she says. "That would be the number one rule." Whatever the future holds, Bevlove will celebrate her new single with a show at Old Miami on Saturday, October 24, hopefully following that up with even more new music soon. —Adam Theisen 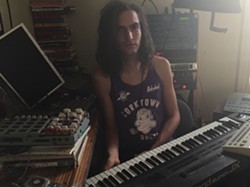 Modestly short-spoken and big in substance, like so many of our favorite techno artists, Gustav Brovold, the self-described "hardware homedog from Detroit," is a musician's musician. Gus started making music early, playing saxophone in his father's experimental rock band Larval, and then progressing to his high school punk bands (such as Lobotomys), and then Deastro (where he learned about audio synthesis and electronic music). Brovold eventually started making techno with "wacky '90s synths and gear," utilizing old-school production techniques. His sound is dark, haunting, and mesmerizing. It can also be high energy, even vicious at times— like on "Gut Wrencher" and "Nomo," which perfectly capture the dystopian vibes so often associated with our metropolitan area.

Unsurprisingly, his influences go beyond techno, ranging anywhere from Sun Ra to Bollywood. His work draws heavily from local electronic music pioneers Omar S, Robert Hood, Kevin Reynolds, MGUN, and Drexciya. "The great thing about being an aspiring techno producer in Detroit is that you are frequently around your idols," he says. "They're not some recluse a million miles away; they're people who I can easily be in the presence of. And for many of them, I am." Brovold promises us a lot more releases in the works, but for now, his Soundcloud has 16 standout tracks, including a

staggering cover of Beethoven's seventh symphony "with a bunch of filter and reverb." His most recent single, "Joel, I Got You Next Time," is included on an artist compilation on the London label called Don't Be Afraid. —Stephanie Brothers

Shells is the solo guitar project of the impossibly busy and highly talented musician, promoter, disc jockey, record label head, jack of all trades, and writer Shelley Salant. Her distinctive and colorful hand-painted show fliers were always a sign that an event was going to be interesting, because she booked it. Salant has played in Tyvek, Saturday Looks Good to Me, Swimsuit, the Rebel Kind, and more — usually guitar, but she's also a surprisingly intense drummer. A longtime Ann Arbor/ Ypsi resident, Salant just relocated to Hamtramck. Hopefully we'll be seeing more of those fliers around Detroit, soon.This summer, while Fred Thomas still lived in Ypsilanti, Shelley recorded her second Shells record. It's solo guitar music, but it's not in any way related to John Fahey. Fans of Gate, Marisa Anderson, and Mick Turner will love her hypnotic electric playing. The single best description for her sound has come from Chatoyant/ Outrageous Cherry's Matt Smith, who told her that "it sounds like Sandy Bull playing out of Swell Maps' equipment." This new record, likely to be released in the spring, is far more fleshed-out and fully realized than her debut, In a Cloud (Life Like, 2013)."I don't want to say that what I'm doing is unprecedented, but I can't really think of what is exactly like what I do," she says. "I put a lot of emotion into my guitar playing and people seem to pick up on that. Playing guitar is pretty much my favorite thing to do. I'm really excited to get this record out there and start touring more with this project. I've done a few shorter weekend things and did a West Coast Shells tour in January 2013. I can't wait to get out there again!" —Mike McGonigal

Thirteen-year-old folk singer Emma Islands' YouTube channel is pretty unassuming. She sits cross-legged on the floor of her bedroom — backpack askew on the floor, holding an acoustic guitar, or sometimes a ukulele across her lap. It's when she starts to sing that you're in for a surprise. Because frankly, it's hard to believe that such a rich, velvety alto can pour out of someone so young. What's more, Islands' voice imbues the pop songs she occasionally covers with such an affecting melancholy that's strikingly relatable to people of any age (check her cover of Madonna's "Borderline").

"I think because I'm so young, people always assume I'm writing bubble gum pop songs," said Islands when asked about her debut album, Echo, whose poignant songs share themes of teenage angst, heartbreak, hopes, and expectations. "Take a chance on my music; hopefully, I'll surprise you." Stand-out track "Wash It Down" was "born from a sleepless night staring at a poster of Kurt Cobain," with a vocal style that may remind one of a mix of Joni Mitchell and Chan Marshall. Islands is currently writing new songs for her follow-up album, and Echo is available digitally all over the Internet. —Stephanie Brothers

Chatoyant self-describe themselves as an "intuitively operating band [with] one foot in art music of the last 100 years and the other in rock 'n' roll abandon." Members of the group have played in or with La Monte Young, Outrageous Cherry, Wolf Eyes, and Faruq Z. Bey. This Detroit supergroup's debut release, an LP recorded at a rehearsal two years ago using four vocal mics and a cassette deck, will be out in the next few months. The group is highly adaptable, and always engrossing. "We've had performances work in an insane array of settings and contexts," keyboardist Joel Peterson says. "Not perfectly every time, but perfectly in very disparate situations."

When asked how he would describe his music to his favorite teacher from high school after running into him or her in line at the market, Peterson says "Favorite teacher? The best teacher I had in high school was my senior year physics teacher. I would tell him Chatoyant is the aural manifestation of many of the principles he taught in class. I do think that's a lot of what we're about, if somewhat unconsciously." —Mike McGonigal

Some hip-hop groups ascend the local musical ladder slowly and steadliy, while others, like Captwolf, just kick in the damn door. Their breakthrough mixtape, Liquor Store Pizza Party at My Crib, sent shudders throughout Detroit's local music scene.

Their music is a mixture of boom-bap and trap with a lot of psychedelic originality in-between (imagine Odd Future collabing with the Boogiemonsters). "L.S.P.P. has been pretty well received; it's only been out a month and we're so grateful for all of the love and attention it's been getting," Swoozydolphin says. "People have been saying it's ahead of its time."

Along with Swoozydolphin; Captwolf is made up of LexTheRadical, Groovy Armani, Novakain, The Captain, and Young Sui. "We have all put out small projects before, but this is our first really committed effort," Swoozydolphin says. Though they don't sound like your typical Detroit hip-hop group; Captwolf is very much influenced by their local peers and predecessors. " I've been super influenced by everything local — Slum Village, Blade Icewood, Ghostly artists, Danny Brown, even the old-school techno and ghettotech stuff," he says.

Most of Captwolf's members have individual projects in the works, which means a steady flow of music for months to come. "We're trying to get performances together in Detroit and Ann Arbor, and fingers crossed for SXSW in March! We just put out a sort of music video I shot and edited, but we have more on the way, too," he says. —Kahn Santori Davison

Growwing Pains have been through a lot since their start in 2011, when members were 16 and 17. "We started out as more of a punk band: faster, more intense," guitarist Adam Hunter says. "Our new stuff is more lyrically driven, mellower, and more thought out." Their self-described "anxiety pop" ranges from frantic high-energy rock to janglier, more subdued numbers. They have no shortage of instantly classic songs under two minutes. These are both great punk songs and great pop songs. Jay Reatard, Violent Femmes, and Raw Prawn are just a few of the bands Hunter cites as influences. Their first LP, 17 Songs About the Same Girl, came out last year on Urinal Cake, and they plan to record a new album over the winter, which they hope will be out by this time next year. Later this month, they hit the road for some dates with Protomartyr.

"I'm just happy to be in a band with my best friends, traveling all around the country playing shows, hanging with our friends, getting drunk for free, going home and recording records we feel proud of, and generally just living an endless vacation," Hunter says. "That's my goal, and so far it's going well." —Jenny Farajbeik