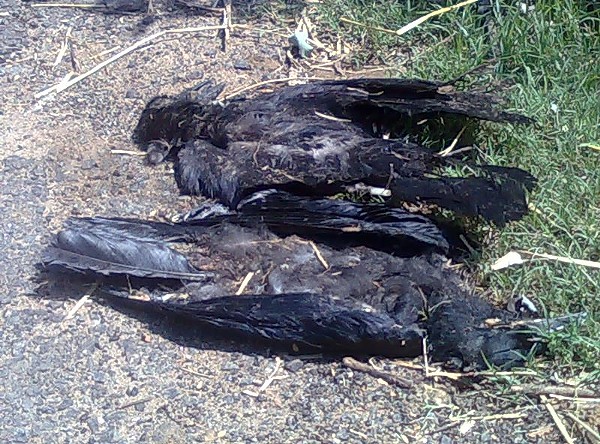 There is a 3 cent bounty for each starling and 10 cent bounty for each crow killed in any village, township, or city in the state.
This one was repealed in 2006, but up until that point, crow hunters were broke. That’s why they were crow hunters.
Persons may not be drunk on trains.
Especially if they’re driving it, one would imagine.
A woman isn’t allowed to cut her own hair without her husband’s permission.
Nobody should cut their own hair anyway.
In Grand Haven, no person shall throw an abandoned hoop skirt into any street or on any sidewalk, under penalty of a five-dollar fine for each offense.
Those five dollars soon mount up if you have an old bag of hoop skirts.
Security guards at Joe Louis Arena will confiscate any item they feel might be thrown onto the ice.
That’s why all of the fish-mongers keep losing their octopi.
It is illegal to kill a dog using a decompression chamber.
No shit, right?
The last Sunday in June of every year was named “log cabin day”.
That was the day the middle little pig got to celebrate.
In Detroit, articles of bedding sold as new to be of all new material and labeled. No person shall sell as new any article of bedding or filling material unless it is made from all new material and a label, meeting all specifications of division 2 of this article, is securely attached to the outside covering.
Quit trying to sell your old mattress, Detroiters.
Willfully destroying your old radio is prohibited in Detroit.
Again, fair enough. Old radios are so pretty.
In Clawson, it’s legal for a farmer to sleep with his pigs, cows, horses, goats, and chickens.
‘Nuff said.
It is legal for a robber to file a law suit, if he or she got hurt in your house.
So kids, put your toys away at night.
It is illegal for a man to scowl at his wife on Sunday in Detroit.
Only on Sunday, mind you. During the rest of the week, scowl away.
No man may seduce and corrupt an unmarried girl, or else he risks five years in prison.
You can’t seduce an unmarried girl? Seiously?
You may not swear in front of women and children.
OK, this one was repealed in 2002, but we couldn’t resist. Even now, you really shouldn’t.
Adultery is illegal, but can only be punished upon a complaint by the affected husband or wife.
Or, try divorce.
Cars may not be sold on Sunday.
Confusingly, they can be bought,
Any person over the age of 12 may have a license for a handgun as long as he/she has not been convicted of a felony.
Relief, huh?
It is illegal to let your pig run free in Detroit unless it has a ring in its nose.
Fair enough, that one.
In Detroit, putt-putt golf courses must close by 1:00 AM.
They had to regulate that? Who’s going drunken putt-putting?
Couples are banned from making love in an automobile in Detroit, unless the act takes place while the vehicle is parked on the couple’s own property.
In which case, what’s the point?
More slideshows