21 questions for 2021: The answers will define what kind of year this will be, for better or worse 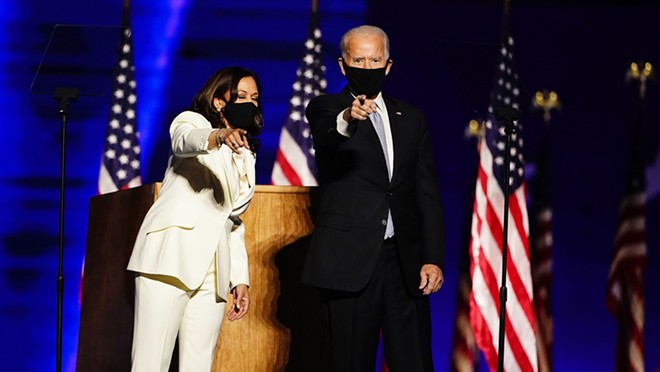 With the annus horribilis 2020 finally in the rearview, we cast our gaze forward, if not to a sunnier future — I’m not that naïve — then to a time when we don’t have to check each morning to see if the president tweeted a nuclear attack order because of a Hannity segment.

We don’t know what unexpected events — foreign policy crises, natural disasters — will shape the Biden presidency. But we know enough about the pieces on the political chessboard to know the questions that will define 2021.
Over my first two columns of the New Year, I’ll pose 21 of these questions. Here, the first 10.


1. Will Democrats win the Senate? The first question to get answered — on Jan. 5, before many of you read this — will also be the most important. If Georgia Dems Jon Ossoff and Raphael Warnock both prevail, Mitch McConnell will no longer control the Senate come Jan. 20. With even narrow congressional majorities, the scope of Joe Biden’s legislative agenda will widen considerably.

2. Can Dems overcome McConnell’s obstruction? If Ossoff or Warnock falls short, probably not. But if they win, 50 Dem votes (plus Kamala Harris’s tiebreaker) could eliminate or substantially reform the filibuster and render McConnell largely impotent. West Virginia conserva-Dem Joe Manchin has said he won’t go along with that. If he sticks to his guns, or if other Democrats are unwilling to overhaul Senate rules, McConnell’s caucus will be able to block key Biden legislation, forcing Democrats to use the once-a-year budget-reconciliation process to pass significant climate legislation or public-option legislation.

3. How far will Biden go to make deals with the Senate? If McConnell is the Senate leader, the House’s progressive ambitions are DOA. If not, the most powerful senators will soon include Manchin, Mitt Romney, Susan Collins, and other moderates who form the “Gangs” that beltway pundits drool over. By inclination, Biden will be eager to claim bipartisan victories, no matter how modest they are.

4. How aggressively will Biden use executive orders? Biden can reverse many of Trump’s immigration, health care, and environmental policies through executive action, and his administration can implement new measures and regulations on all sorts of things — the Affordable Care Act, oil and gas drilling, education, etc. If Biden’s legislative agenda is curtailed, this might be the only way he gets things done.

5. Will Congress pass another stimulus? The same Republicans who tripped over themselves to pass Trump’s $1.9 trillion tax cut got born-again on the deficit “crisis” the second Biden won. Deficit trolling gives them an excuse to oppose whatever spending Biden proposes, and limiting government intervention will also slow the economic recovery, which will help them politically. In other words, if another stimulus happens, Democrats will do it on their own.

6. How many Republicans will join the Sedition Caucus? At least 140 Republican House members and 11 Senators say they’ll object to the certification of Joe Biden’s electors on Wednesday, based on “election irregularities” that Lin Wood probably hallucinated after sucking down some bad oysters. That none of this is based in reality goes without saying. That some Republicans are declaring illegitimate the very elections that brought them to Congress is amusing. That this destructive gambit will fail is hardly grounds for celebration.

7. How will the media treat those who do? Whether these Republicans believe their own bullshit or they’re cynically placating the rubes (or Trump’s narcissism), this would-be coup is an unprecedented assault on American democratic institutions that goes beyond polarization or anything resembling normal politics. And if the national and local media fail to recognize the GOP for the extremist, authoritarian movement it has become rather than the center-right party “objective” reporters want it to be — if they grant legitimacy to these actions or actors to avoid the appearance of bias — they’ll only be greasing the skids of our slide into authoritarianism.

8. Will Republicans continue believing the election was stolen? After his ludicrous lawsuit to allow Vice President Pence to unilaterally select the next president failed, U.S. Rep. Louis Gohmert told Newsmax that Trump’s supporters now had no recourse but to turn to street violence. (Gohmert has since walked back the comments, saying, "I have not encouraged and unquivocally do not advocate for violence.") Most won’t, though Washington, D.C., is bracing for clashes this week. Still, polls show that Trump’s delusional tantrum has convinced a majority of Republicans that the election was stolen and, hence, Biden’s presidency is illegitimate. For some, that view will lose currency as Trump recedes from the spotlight. For others, however, it will calcify into an article of faith, further uniting the GOP in its collective sense of grievance and making it more orthodox in its extremism and feel more entitled to win by any means necessary.

9. Will conspiracy theories lead to more voting restrictions? If the last decade has taught us anything, it’s that “widespread voter fraud” claims are always (a) baseless, and (b) a pretext for laws that make ballot access more difficult for marginalized and Democratic-leaning communities. Do you think this time will be any different?

10. How long a shadow will Trump cast over the GOP? Trump’s presidency was defined by egoism and impulsiveness. His post-presidency will be no different. He’ll seek to avenge slights and assert his dominance over the Republican Party. He’ll back primary challengers against the insufficiently loyal. He’ll carp on Twitter. He’ll host rallies. He’ll tease another run for president and insist — with increasing shrillness and an evolving web of conspiracies — that he beat Joe Biden. He’ll do anything but go gentle into that good night. And in the process, he’ll either freeze the party in place or wear out his welcome as a new crop of politicians vies for his throne. Regardless, the grievance-driven authoritarianism he rode to the White House won’t disappear, though it might get dressed up in a suit that actually fits.

Get Informed Dissent delivered straight to your inbox. Subscribe today at billman.substack.com.