Sorry, Lana Del Rey — 2018 is not about that "Summertime Sadness." In fact, metro Detroit's concert lineup is so stacked that it's shaping up to be the summer of badass-ness. From legendary rockers and folkies to rap royalty and pop priestesses — not to mention the off-the-charts influx of indie acts — metro Detroit has the hottest tickets in town for a summer to remember.

The chill R&B rapper experienced glowing success after his self-produced album There's Really a Wolf, which dropped in 2017, becoming one of Nielsen's most streamed artists of the year thanks to the success of his track "Losin Control." The 25-year-old Atlanta native will be serving up some smooth jams as a part of his "I See You Tour."

Primus is as wild as ever, partnering with the Grammy award-winning group Mastodon in support of its ninth album. The group is welcoming back original members to recreate its fundamental 1995 sound.

Homebound — the Farewell Tour marks the retirement of yet another classic rock legend. The singer-songwriter has graced us with his impeccable sound since the 1960s as part of Simon & Garfunkel, then moved on to his successful own solo projects. In his retirement statement Simon questioned what it would feel like to stop performing: "Now I know: it feels a little unsettling, a touch exhilarating, and something of a relief."

You're not dreaming. The Championship tour will bring together two of the most powerful names in contemporary music. Both Lamar and SZA dominated in 2017, releasing albums that topped the charts, ruled the radio, and received critical acclaim. Lamar's right-hand dude ScHoolBoy Q also joins the bill.

Kick off your shoes and get down — surfer-turned-soft-rocker Jack Johnson and his sustainable too-blessed-to-be-stressed vibes will keep you cool. Johnson, best known for low-key hiking/makeout jams, has asked G. Love & Special Sauce along for his "All the Light Above It Too" world tour in support of his 2017 record of the same name.

With a name like Black Moth Super Rainbow one could draw several conclusions as to how the band might sound. But BMSR has found a way to mesh electronica's ambience and the poppiness of, say, Jon Brion's I Heart Huckabees score for a sound that is as unique as their damn name.

If you haven't been keeping tabs on Detroit's JR JR, you're not alone. Formerly known as Dale Earnhardt Jr. Jr., the band fell off the map after they canceled the majority of its 2017 tour plans (including a doubleheader at El Club) due to illness. The indie pop duo known for sweet harmonies and electronic ambience make their return to kick off the Beacon Park concert series.

Canadian electro-funk duo Chromeo have perfected the summer jam. Whether you want to get busy in the sheets of your air-conditioned abode or sweat it out in the streets, their latest tour is in support of Head Over Heels, a record that lends itself to all your summer mischief.

Erykah Badu is not just a one-trick "Bag Lady," and don't dare peg Nas as just a rapper. Two of the most influential names in the game will serve up a poetic and sensual power-dose of chill hip-hop flow.

As one of several little cutie heartthrobs from the X-Factor-winning boy band One Direction, Harry Styles is hardly a footnote in the annals of pretty-boy pop history. In 2017, he stunned with his refreshing and dynamic self-titled debut record and hit single "Sign of the Times."

This princess has seen some shit. Destiny Frasqueri, aka Princess Nokia, has a knack for deceptively dark rap, rhyming "dial-tone" with "die alone" on 2018's "For the Night." A feminist and queer activist, the Puerto Rican rapper is on the rise with her totally woke style.

When you've endured as much as prog-rock pioneers Yes, a golden anniversary is worth celebrating — and that's exactly what the band intends to do. "An Evening with Yes" will honor the Rock and Roll Hall of Fame inductees' 50th anniversary and will celebrate 21 studio records and countless live recordings that have solidified them as integral threads in the tapestry that is rock 'n' roll. The lineup will include Steve Howe (guitarist since '70), Alan White (drummer since '72), Geoff Downes (keyboards, joined in '80), and will be led by Billy Sherwood, who joined in the '90s and took over bass and vocals after frontman Chris Squire's death in 2015.

The incomparable Neil Young is hitting the road for a short string of intimate solo shows and Detroit has been chosen as one of the tour's six destinations. As it turns out, the "Old Man" adores our city and recently recalled fond memories spent at the Fox, Masonic Temple, and recording in Motown studios. Most recently, the 72-year-old icon announced he is leaving social media to focus on his new website the Neil Young Archives, which has been described by the singer-songwriter as "a giant time machine cabinet."

If you're not hip to the War on Drugs you should know that catching these Grammy-Award winning indie rockers at a venue as intimate as this is a rare opportunity. If you are in the know, though, then you can attest to how the band's unique sound — think Ryan Adams meets Tame Impala — likely is what launched them into the stratosphere.

Beck off, fam. Rock's favorite pint-sized Scientologist will visit Detroit just two days shy of his 48th birthday. Beck last rolled through town in 2017 when he opened for U2's Joshua Tree Tour at Ford Field. From his earlier ambient vibes to his more recent radio-pop efforts, 2017's Colors peaked at No. 1 on the U.S Billboard Rock Charts because, let's be honest, Beck is no loser. 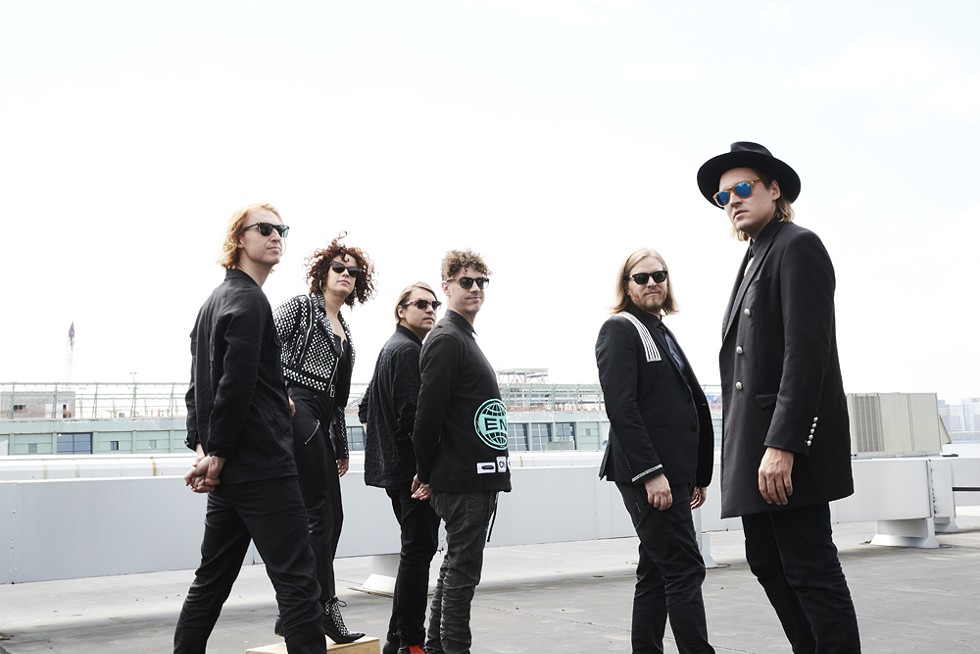 Canada's heavyweight champions of whimsy and depression is headed to the suburbs. Arcade Fire will head to DTE as one of six headlining North American non-festival dates. The band delighted us with its elaborate and boxing-ring themed "Infinite Content" arena tour and spectacle last year in support of 2017's Everything Now, the most divisive album in its catalog to date.

Angels are real, y'all, and singer-songwriter, actress, activist, and visionary Janelle Monáe is living proof. Monáe will hit the road in support of her recently released third record, Dirty Computer. Her last tour with Kimbra was canceled due to illness, but this one is sure to fill the void.

The comeback queen of justice and glitter is hitting the road — and she's got company. The Adventures of Kesha and Macklemore follows a successful 2017 for both artists. Kesha released the beautifully rebellious Rainbow — her first album in five years following a legal battle with alleged abuser and producer Dr. Luke. Macklemore dropped Gemini earlier this year, his second solo release without Ryan Lewis. The tour will donate $1 from every ticket sold to support RAINN (Rape, Abuse, and Incest National Network,) and M Plus 1, an organization that advances racial and social justice.

It's the end of an era. For 23 years, Warped Tour has held a special place in our pop-punk hearts. Warped Tour makes its final round with a stacked lineup that includes the Used, Taking Back Sunday, Sum 41, Senses Fail, and more.

Just when we've given up hope, Ms. Lauryn Hill comes along. Since the release of The Miseducation of Lauryn Hill, her stark and seminal debut 20 years ago (and inarguably the greatest female rap album of all time), the ex-Fugee has not released a studio album. So, what do you do when you only have one fucking amazing record that shaped the entire hip-hop world as we know it? You celebrate each totally perfect track, and that's exactly what Hill is planning to do during her anniversary tour.

Radiohead is either the greatest band of all time or the most overrated band ever to exist. If you believe the latter, however, you are wrong — and it's OK (computer).

If you believe the former: Radiohead has scheduled a rare appearance in Detroit and we could not be fitter, happier. The last time Thom Yorke and company visited the Detroit area it was in support of King of Limbs in June of 2012 at the Palace of Auburn Hills. Before their 2012 performance, the band had last played Detroit in August of 1997 at the then-State Theater.

Clearly, Chene Park has the summer lineup on lock. Look no further than this heavy-hitting pairing. The Roots have teamed up with rapper, actor, and poet Common to defy hip-hop by infusing their unique collab with funk, soul, and electronica — suitable for making babies or making changes.

The hustle and bustle of your typical outdoor fest does not exist at Tommystock — the three-day, chill AF camping and music festival on the 140-acre Camp Agawam in Lake Orion. Catch sets by Kent Koller, In Harmony's Way, the Implications, Acoustic Ash, Dalayne Natke, and more.

Mo Pop Festival is back for year six, and we have died and gone to indie heaven. Indie overlords Bon Iver, who have not made a Michigan appearance in more than a decade, are headlining the festival. The National, Portugal the Man, and St. Vincent are also top-billed with support by the likes of Vince Staples, Brockhampton, Daniel Caesar, Alvvays, and local darlings Joe Hertler & the Rainbow Seekers — along with Metro Times' 2018 "Bands to Watch" artist, Shortly.

We've been waiting a long time for Colombian belly-dancing pop sensation Shakira to roll through Detroit as the twelve-time Grammy-winner had postponed her "El Dorado World Tour" last year due to a vocal chord injury. In support of her latest record, El Dorado, Shakira is primed and ready to prove just once and for all that her hips don't lie.

The Detroit native and L.A. resident's Fever reveals some serious strides in the evolution of the former Slum Village rapper. As one of the most dynamic hip-hop artists around, Black Milk will take the El Club stage for a doubleheader. Ever since he left the city, we've been waiting for Drake to call us on our cell phone — or at least come back to Detroit, seeing that it's been a two-year drought without our beloved Drizzy, and we are thirsty. The last time Drake paid a visit to the Motor City was for 2016's co-headlining tour alongside Future at Joe Louis Arena, during which Eminem was summoned via a trap door in the stage. This time around, our beloved Champagne Papi will likely be peddling tunes from his forthcoming fifth record, Scorpion.

Celebrating the release of its new album, 7, these indie dream pop babes are making their way to the Midwest to celebrate. "I feel like there's a reason why this record happened," the band told Pitchfork earlier this year. "We're about to find out when we go on tour what it means to people."

It's been nearly 25 years since Dinosaur Jr. intoxicated us with "Feel the Pain," but our love for these indie-noise makers is far from extinct. Just this year the band teamed up with Jack White's Third Man Records to release a special 7-inch recording of its live TMR Blue Room performance.