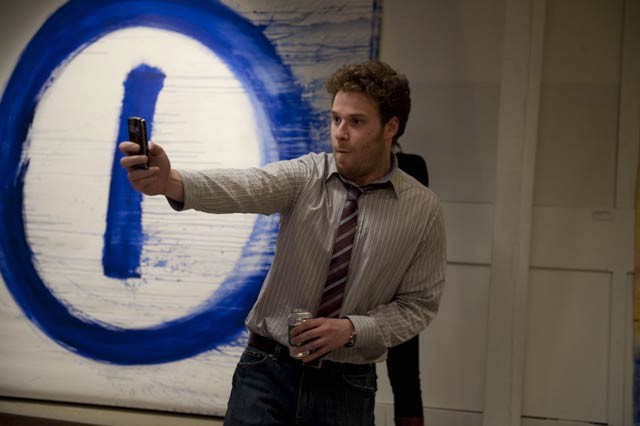 Loosely based on screenwriter Will Reiser's own experiences with cancer, 50/50 does something rare and impressive, tackles the awkward emotional struggle friends and family go through when a loved one is diagnosed with a life-threatening illness. More than just a bro-banter-spiced take on Terms of Endearment, Reiser not only captures how cancer affects the stricken but also how it influences the behavior of everyone around them.

Adam (Gordon-Levitt) is a fastidious 27-year-old Seattleite who works at a public radio station. A consummate "nice guy," he's a bit of a doormat for his brash and obnoxious best buddy Kyle (Seth Rogen) and artist girlfriend Rachael (Bryce Dallas Howard). When persistent back pain sends him to the doctor, he's diagnosed with a lethal spinal tumor. Needless to say, this triggers all sorts of emotional reactions from the people around him, leaving Adam to work through his issues with Katherine (Anna Kendrick), the therapist-in-training he's been assigned to.

Gordon-Levitt once again proves his acting chops, selling Adam's dawning sense of mortality while, rather incredibly, giving us a nice guy character we honestly care about. Defying the cliché that mild means uninteresting, his thoughtful performance is masterfully calibrated to reveal only hints of the doubt, rage and fear that roil behind his pleasantly detached exterior.

The rest of the cast is similarly excellent, with the too-little-seen Angelica Huston as Adam's loving yet overbearing mother, and old pros Matt Frewer and Philip Baker Hall as fellow chemo treatment buddies. Rogen's improvisational rudeness and vulgar banter are best suited for such supporting roles as Kyle, and here he provides just the right amount of comedy to temper 50/50's mushy underpinnings. Kendrick, on the other hand, turns in her best performance yet, finding just the right mix of professionalism, sarcasm and awkward attraction to make her developing trust with Gordon-Levitt work.

If there's a false note, it's in Dallas Howard's cowardly and selfish Rachael. Despite the actress' best attempts to humanize what could have been a pretty interesting role — the less-than-brave girlfriend who's afraid to ditch her sick boyfriend — Reiser has written her as an unlikable bitch. This is a surprisingly cruel twist in an otherwise clear-headed script, suggesting that the screenwriter might be out for a little personal payback.

Otherwise, 50/50 is a sharp and uncommonly sweet film, filled with convincing moments of humor, realism and vulnerability. Levine handles the tonal shifts with care and attention, only giving in to sappiness in the movie's final reel. Even then, his movie has done such a wonderful job — illustrating how Adam attempts to maintain a sense of everyday grace as his faith in medicine and the people around him fails — that we can forgive a little sentimental indulgence.

It's refreshing to see a film that depicts cancer and cancer treatment in such a realistically humane way, finding the rough-hewn moments of laughter and fear that face the afflicted, without turning them into bald-headed saints.