Finding Relief through a traditional medicinal. 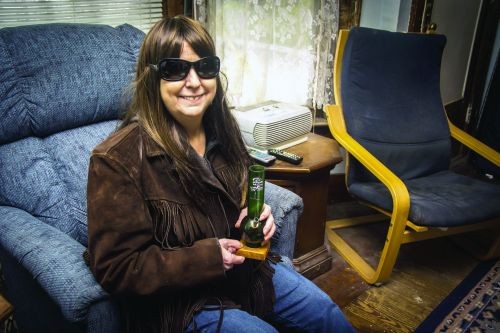 My mom Anne was born in 1957 to a very middle-class family in a very middle-class town. She graduated from high school and, as was the way back then, was married soon after. She did all sorts of normal things that teenagers did in the 1970s, like going to concerts and hanging out with friends. One of her proudest accomplishments was chasing down Bob Seger from Toledo to Plymouth and getting his autograph on some rolling papers. Her other notable accomplishment, she swears, was having a daughter — me. To that, she jokingly adds, “… and that was more than enough for me!”

By age 30, my mom had gone through a divorce and was awarded full custody of me — and still everything was average. She struggled with her average job, making house payments and raising a child on $11 an hour (in 1987). Through the years, she eventually found her way into a job that, though one she hated with every fiber of her being, finally allowed her to start saving, take vacations, and live a slightly less stressful, less average life.

Unfortunately, average ceased at age 53 when my mom was told that she had the “C” word: cancer. And it was no run-of-the-mill melanoma; Stage III colorectal cancer that had spread to neighboring lymph nodes.

In September 2010, Mom began chemo and radiation treatment. The massive size and unfortunate location of the tumor meant that she was facing a permanent colostomy. For those lucky enough not to be familiar with a colostomy, it’s when an artificial port, or stoma, is created, into which a bag is attached on the outside of the body to collect feces — literally, a bag of shit.

As if dealing with this major life-altering surgery weren’t enough, my mother was also struggling with the crippling side effects of chemotherapy, namely nausea and vomiting, fatigue, nerve damage and diarrhea. After her permanent colostomy at the beginning of 2011, deep depression set in.

“I was ready to die at that point,” she confides. “I wished I would have died on the table.” A month later, she was back on chemotherapy, suffering the same side effects. “Predominantly, it was nausea and fatigue,” she explains. It was around this time my mom, my prototypically average mom, started smoking pot. Her old friend agreed to bring over a couple of joints. Trying weed wasn’t her go-to, nor was it without first seeking pharmacological alternatives. She had tried numerous drugs to help with the nausea: Compazine, Zofran, even synthetic THC.

“None of it really did anything,” she says. “At the time, I thought I was handling my diagnosis and everything pretty well. Well, [an old friend] brought this over, and I had about three hits off of the joint; all of a sudden — the pain was gone, the nausea was gone. I felt the anxiety going away. Anxiety that I didn’t even know that I had. Everything was really kinda OK. I was feeling like how a normal person should.”

After her final round of treatment, my mom went back to work in August 2011. She worked full time, until March 2012. She was rapidly losing function in her left arm and leg, unable to walk but a few steps.

After an emergency trip to the emergency room, we discovered the cancer had come back. This time, though, with metastases to the lungs and liver, and a large tumor in her brain.

In July 2012, Anne became officially “legal” to smoke medical marijuana. Yet, she was faced with a difficult task: Where to go shopping?

“At first I had a bit of a problem. [Dispensaries] aren’t just in the phone book, and the ones I found online, half of them were closed,” she says. “The one I did find that was closest to me … closed, and that one wasn’t close to me, either … but the next closest one is like an hour-and-a-half away. I did find a caregiver that will now deliver to me and that’s been wonderful. I can’t thank him enough, ’cause he works with me and helps me find what works … for me.”

As far as the strains that treat her chemotherapy symptoms the best, my mom — it’s still hard to believe my average mom is offering opinions on weed — recommended, “ATF and Komondo Dragon. Those two take me where I need to be without getting me paranoid or anxious,” she says. “I only need about two to three puffs and I’m good to go.” She also faced an oxymoronic, secondary issue that might seem comical if its intended use wasn’t so gravely important: “Everything that I get is just too strong! If I smoke too much, I become too anxious, and that defeats the purpose.”

Today, as we enter the final months of 2013, with just 13 shopping weeks left until Christmas, my mom was told she has approximately six months left to live. She’s tried almost every chemotherapy concoction that exists. (Currently, she is on Stivarga, a brand-new oral form of chemotherapy. The side affects are much stronger and she has been struggling a little more each week.)

“God bless those people that supply it! Everybody that is going through this sickness should have the choice and the ability to get it,” she expresses. “It’s been a godsend; it just really has. I don’t smoke it every day, only when I need it and I’m so glad it’s there when I need it — and it should be available to everybody that needs it.”

Kelly Johnston is Metro Times events photographer and a contributor to the Chronicle Issue. Send comments to kjohnston@metrotimes.com.