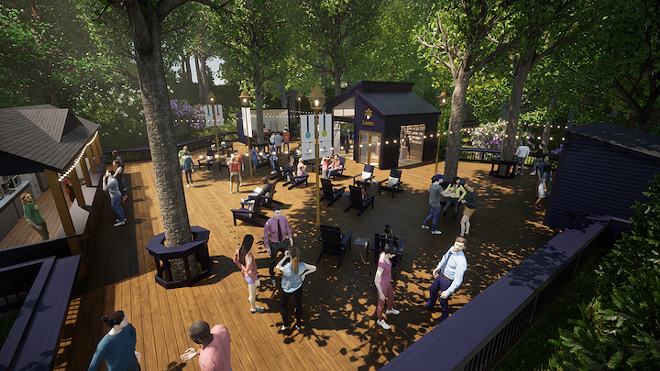 Smoking weed and chilling with some music is a mainstay combination of stoner culture. And some performers have pointedly groomed a stoner fan base — think acts like the Grateful Dead, Snoop Dogg, and Baroness.

As marijuana legalization spreads and people incorporate its use more openly, pairing marijuana and live music seems a natural phenomenon. Still, it's something of a surprise that Lume — the biggest cannabis company in Michigan, with 21 dispensaries and plans to have 40 by the end of this year, in addition to growing and processing facilities — has entered an agreement with entertainment company 313 Presents to make Lume the official cannabis of DTE Energy Music Theatre.

Of course, plenty of pot has been smoked and vaped up on the amphitheater's hill since the days when it was known as Pine Knob. The surprise is that such a big name as DTE Energy has an official cannabis brand, and the long-term plan is for Lume to actually sell products for consumption at the concert venue.

"We're trying to take cannabis out of the shadows and put it in the spotlights and get it into the culturally mainstream events," says John Gregory, chief marketing officer for Lume. "Cannabis and music have always gone well together, not tied to a specific kind of music. We can showcase our brand in an unexpected way. ... We want to get the taboo and old prohibition sentiments in the rearview."

The five-year agreement includes signage and branding throughout the venue ("stage, parking lot, everywhere you go," Gregory says), with products under glass for people to look at and the opportunity to place orders for later pick up at the stores. Eventually, the "Lume Tree House" can be easily converted into a consumption lounge.

Lume still has some heavy lifting to do to realize the end goal of selling products at the amphitheater. For one thing, Independence Township, where DTE Energy Music Theatre is located, has not opted in to the state recreational marijuana program — yet Gregory expects Lume will sell products there in the second year of operation. Maybe he knows something the rest of us don't know.

Not only will Lume be present at DTE Energy Music Theatre, but Gregory says the company has the right of first refusal for any company that 313 Presents has contracts with — places like the Fox Theatre, Little Caesars Arena, and Comerica Park.

"It's not if, it's when," says Gregory, who admits to being in talks with the major sports stadiums.

That's a natural extension of Gregory's previous job doing marketing with the New Balance Athletic Shoe company. He worked with a lot of people in the world of sports, and those contacts are contacts whether he's knocking on the door with shoes or cannabis. In fact, the new agreement with DTE Energy kicks off on Saturday, July 24 with a CBD-focused sort of athletic event. Yoga on the Lawn, led by Citizen Yoga founder Kacee Must, will take place on the hill along with a DJ set by MEHUŁ. There will also be wellness products provided by Lume.

Not everything there will be given over to cannabis consciousness. If a family-friendly event involving children is scheduled, Gregory says, "we will remove our branding or cover it up."

A quick look at the DTE Energy concert schedule for the rest of the year shows none of that. Instead acts such as Dead & Company, the Black Crowes, Chris Stapleton, Dave Matthews, and Pitbull and Iggy Azalea will attract audiences with plenty of cannabis-friendly folks. Indeed, although Lume won't be providing any consumables just yet, there will be cannabis consumption in the place. The Lume plan is sort of sanctioning what people are already doing.

This is pretty much what "big marijuana" looks like in Michigan at this point. Lume has close to 1 million square feet under cultivation. It has its own processing facilities and can provide products for those planned 40 stores. This new agreement with 313 Presents will make Lume very visible in the public eye, and cultivate the canna-curious crowd in environments where they feel safe.