Anatomy of a meal 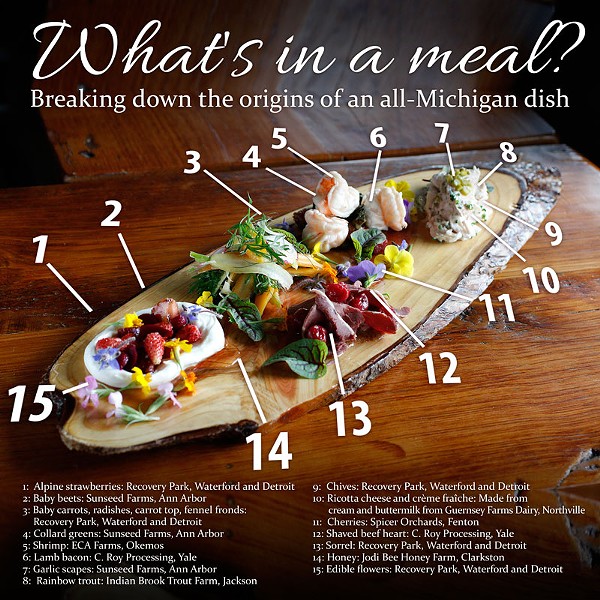 At Indian Brook Trout Farm, fish are raised in free-flowing water that comes from an underground aquifer.

Michelle Lutz runs Recovery Park out of greenhouses in Waterford right now, but plans to move the operation back into Detroit this year.

On a June afternoon, the day shift is moving into the kitchen at the Root, the locavore restaurant run by chef James Rigato in White Lake Township. The space presents quite a contrast from the restaurant's elegant dining room. Music begins to pulse from the sound system as Rigato starts gathering his materials. He's listening to Amos Lee to calm him down. Rigato cracks, "I used to be all, like, DMX in my younger years, but now I'd rather not take Xanax. So I'll just take Amos Lee."

Rigato has met us here today to create a dish that's sourced as locally as possible, something that's his specialty. Surveying the ingredients, Rigato says, "We've got a lot of local shit here."

Over the course of 15 minutes, Rigato prepares what he calls a Michigan charcuterie board. It's like several small plates in one dish, mounds of food and condiments presenting a riot of flavors, all meant to be enjoyed with a bottle of wine over the course of a half-hour. There are tender bits of smoked rainbow trout tossed with ricotta, chives, and pickled garlic scapes. Shaved beef hearts enfolding pre-Prohibition-style Maraschino cherries atop a coffee-cherry mustard. Southern-style greens made with lamb bacon, heaped with pickled shrimp. Fresh and pickled carrots intermingled with fennel fronds and delicate sorrel leaves. Alpine strawberries mixed with baby beets pickled in balsamic vinegar. For good measure, the whole dish is drizzled with honey and strewn with edible flowers. It's all presented on a board from a tree — the bark still on it — but finely sanded down and given a protective glaze by a Michigan artisan.

Rigato's dish dazzles the eye, to say nothing of the palate. And yet the most impressive thing about it might be the fact that it's sourced almost 100 percent from Michigan, specifically from that broad farm belt running from the outer reaches of metro Detroit to Kalamazoo. Rigato cultivates relationships with the people who give him his basic ingredients, and does everything else in-house, including smoking, making cheeses, pickling, and cutting bacon — as he says, "no compromises."

Of course, not every ingredient can be from Michigan. The skosh of olive oil Rigato adds to the pickling juice to create the dressing for his little carrot salad can't be made here. But pretty much everything else is, down to the mustard, flavored with real coffee beans from Kalamazoo's Water Street Coffee, a microroastery that specializes in single-origins coffees and works with micro-farmers who use sustainable practices.

He may not be able to rattle off the Latin names of his ingredients like some chefs can, but he knows where every item on the plate came from, and has a human relationship with the people who made it. So we set about to get to know them too, to provide a snapshot of the people driving Michigan's local food movement.

We found an unusual mix of the traditional and the forward-looking, from established family businesses spanning generations to small-scale producers who fuss over every detail to exciting, next-generation stuff: growers who raise their crops in the city and men who farm fish up on land. One thing they all share in common is they're doing what they love to do, and they're proud of it.

The raw material for Rigato's shaved beef hearts and lamb bacon came from C. Roy Processing, located in the small town of Yale, up in the Thumb. Known to the many locals as "the bologna factory" — as it's the home of Yale Bologna — the family business was founded in 1924. Nancy Roy, 68, is the daughter-in-law and niece of two of the founders. She now runs the business with her husband Dick, and her daughter and son-in-law, Jennifer and Brian Lossing.

Of course, it's more than a "bologna factory." It's a slaughterhouse, meat packer, and butcher shop. It's also one of the few USDA plants left in the state that brings in live animals, and has them slaughtered, cut, and wrapped ready for the freezer with the USDA stamp on it. The business model is simple: As Nancy puts it, "The local farmers raise our animals, and we bring them in and slaughter them and package them for our local customers."

But C. Roy is picky about its meats. The factory is certified for grass-fed, organic, and traditional meat products. That means the farmers producing the livestock have to be certified as organic or antibiotic-free.

Luckily, the country around Detroit still has its fair share of farms raising animals the old-fashioned way, far from the smelly, "concentrated animal feeding operations" that crowd the Midwest. "There are no feed lots in our area," Nancy says. "So that's one of the nice things. These animals have lots of room to roam, and they are given enough communication with a human being that they come to you not completely wild."

It's the way C. Roy has always done things, pulling in traditionally raised livestock from the countryside, though the radius is expanding as older farmers age out of the business. These days, that wider arc runs as far south as Monroe County, as far west as Ann Arbor, and as far north as Snover.

While there would likely be greater profits in many other businesses, the family sticks with the processing plant. Asked why, Nancy calls it "foolish pride."

She says, "We aren't doing it for the money, obviously, yet it has been a good life. But we do it for the pride of what we're here with."

Remember that honey Rigato drizzled over the dish? It comes from the honey house of Judy and Lloyd Schmaltz in Clarkston. The couple began beekeeping as a hobby around 1979. Judy says, "We started off with three hives, and we filled up honey bears and we took them to where Lloyd worked and — zoop — they were gone. So we got a few more hives, and then a few more hives, and pretty soon we were up to a couple hundred. Now we're running 125."

If that seems like a whole lot of hives, Judy is quick to differ. "If you're a big commercial beekeeper you have 1,000 hives, but they don't do what I do. Large commercial beekeepers will wholesale their honey to anybody who wants to buy it and pack it up in volume. Being that we're small and my husband has a real job so that I can do what I want to do, we don't have to worry about putting food on the table."

The work of making honey products happens right on the Schmaltzes' property, in a certified honey house out back. Under the label Jodi Bee Honey Farm, they produce comb honey, raw honey, and creamed honeys. They even produce varietal honeys, in which the essence of the predominant blossom the bees fed on comes through in the flavor. It's a tricky business to get bees to all feast on the same flowers, but the couple scours the countryside for locations.

Judy tells us, "You see if there are a lot of a particular flower that blooms there at a certain time, and then you ask somebody in that area if you can put beehives out there. And out where we live, people are quite happy to have beehives. They like nature."

Lloyd says, "We have nine different locations. I used to put about 10 to 20 hives at each location depending on flower source. Bees will travel a mile or so to get honey, but the further they fly, the less honey you're going to get — they use a lot of energy. So you locate the hives in the center of about a quarter-mile radius where you've got your flowers. Out here in Ortonville, we have a lot of open land, and there's just a lot of flowers at various times in the year. Right now, we have a flower that's blooming that's called a star thistle. Technically it's Russian spotted knapweed, and that produces a very nice, mild honey. That's in bloom right now, so the bees are really darting in and out collecting that."

Talking to Judy and Lloyd, you get the sense they really care about what they do. Not just profits or losses, or just about harmful insecticides and parasitic mites, but about whether their bees are getting the nutrition they need, or whether they have enough blossoms to enjoy. Lloyd says, "I've had fields of full of alfalfa, except the people who raise alfalfa like to cut it during the bloom, and that's kind of rough on the bees. ... I had one yard at an apple orchard out here, and the bees love it. But it only lasts about two or three weeks, and so there has to be something after the apples bloom, and you have to worry about after because that's gonna be a short time."

Judy says, "The best thing you can do for a bee hive is pretty much leave it be. Don't go in too much. Don't truck them all over the country."