A colorful art exhibit, movie night with Sheefy McFly, Fire and Ice fest, and more things to do in metro Detroit 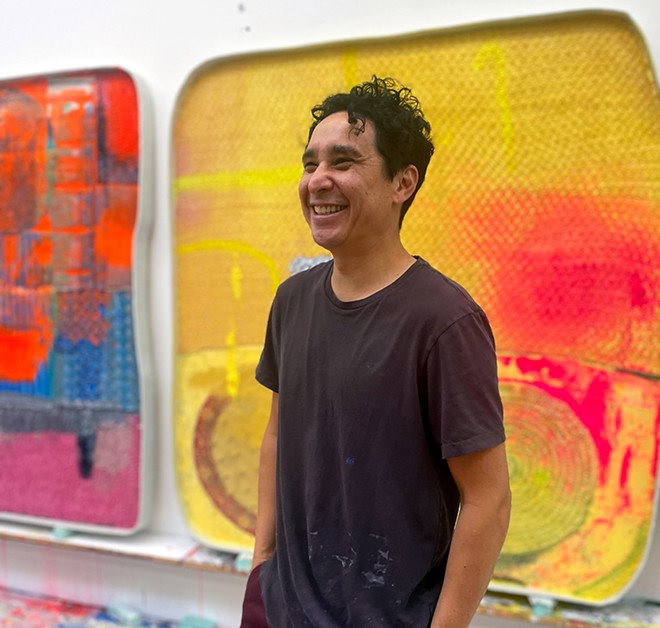 Thursday, Jan. 13: While Dearborn’s Ford Wyoming will always be the OG metro Detroit drive-in, downtown’s Monroe Street Drive-In near Campus Martius is pretty legit. It’s covered in art by local artists, including Detroit’s own Sheefy McFly, who will host a movie night on Thursday. McFly, or Edward Elecktro as he goes by when he’s spinning music, will be doing a live DJ set and art giveaway before a showing of Back to the Future. (His name is a nod to BTTF’s time-hopping hero, Marty McFly.) —Randiah Camille Green

Friday, Jan. 14-Sunday, Jan. 16: For those who’d rather do something socially distanced outdoors instead of going to a COVID-19 breeding ground like the bar, head to Valade Park. The Detroit Riverfront Conservancy will host a Fire and Ice festival where you can gnaw on a turkey leg, grab an alcoholic beverage, enjoy some medieval music, snap a pic on a throne made of ice, and warm up at a bonfire encased in a seven-foot ice tower. There’s also a blacksmith demonstration and a LARP meetup. (You know, for the people who like to dress up like they’re from the Middle Ages and hit each other with foam weapons.) If that’s you, cool. If not, bring a hot date and chill next to the (regular-sized) bonfires, or bring your friends for the techno dance party on Saturday night. —Randiah Camille Green

Saturday, Jan. 15: Artist James Benjamin Franklin has made a name for himself with the vibrant, mixed-media paintings he creates in his Detroit studio, which includes a backyard where goats roam. The Washington-born artist relocated to the Motor City from New York City in 2015 to pursue a Masters of Fine Arts from Cranbrook Academy of Art, and it’s safe to say the city has rubbed off on him. His colorful, playful pieces utilize repurposed carpets, afghans, bathroom mats, and towels, covered in epoxy, acrylic, rubber, sand, and glitter, and presented in irregularly shaped plaster-molded frames. The funky pieces call to mind the styles of local artists like Tyree Guyton and Gordan Newton, who also made art from Detroit detritus. For Practice, Franklin is presenting some of his largest works yet, towering at more than six feet tall. —Lee DeVito

Sunday, Jan. 16: “Everything was neon and ugly. Color combinations were the worst. Fashion was weird, music was over-digitized, and it was an awesome time to be alive,” say the event organizers at the Detroit Shipping Co. food hall. Honestly, compared to how the third decade of the 21st century is shaping up — a pandemic, recession, global supply chain crisis, civil unrest, increasingly severe weather events caused by climate change, the Metaverse — we wouldn’t mind going back to simpler times. And brunch. Detroit Shipping Co. is serving up a taste of both with its latest installment of its monthly brunch series, which features brunch specials from Coop, Bangkok 96, and Momo Cha, along with popular cocktails from the ’80s and a soundtrack of pop hits courtesy of DJ Intense. Cowabunga. —Lee DeVito

Sunday, Jan. 16: Speaking of increasingly severe weather events caused by climate change, Michigan-based artists and curators Laura Earle, Leslie Sobel, and Olivia Guterson present works from 15 artists on the subject. “What is the legacy we want to leave for future generations?” Earle says in a statement. “We can already see the cumulative impact of simple daily choices — so many changes have occurred just in our lifetime. We have a narrowing window in which we can make lasting change. I want to amplify insightful and hopeful voices in this conversation, and encourage every member of our community to take part.” A centerpiece of the project will see a large-scale sculptural piece hanging from the Janice Charach Gallery’s second-floor skylight down to the first floor. The curators also invite members of the community to contribute by writing letters to Earth which will be placed in a mailbox and used to create an installation and video. A refurbished vending machine will also sell small pieces of art created by artists across the country, and a dance performance, “Elements of Life: Moving Together with Nature,” will be held from 6-9 p.m. —Lee DeVito

From 3-6 p.m. at The Charach Gallery; 6600 W. Maple Rd., West Bloomfield; gallery.jccdet.org. Exhibition runs through March 3. Admission is free (tickets are $18 for the performance).

What’s Going On things to do in Detroit