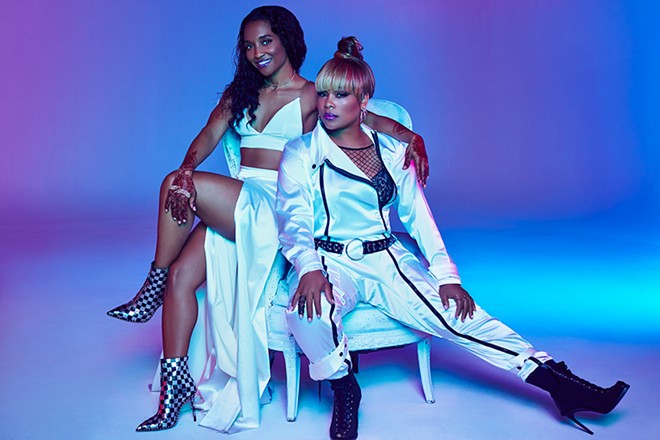 While swirled and swooped baby hair may be a new trend for Generation Z, Rozonda "Chilli" Thomas's perfectly laid edges were a part of her look that had girls like me practicing in the mirror with an old toothbrush and hair gel.

The baby hair icon is one-third of TLC, one of the best-selling girl groups of all time. With more than 85 million records sold and two diamond RIAA-certified albums, TLC has cemented their place as pop culture icons.

This year marked the 27th anniversary of their sophomore album, CrazySexyCool, and to celebrate Chilli and Tionne "T-Boz" Watkins are honoring the record with an 18-city tour.

In a conversation with Metro Times, Chilli discusses the making of CrazySexyCool, the group's place in pop history as Black women, and publicly grieving the loss of former member Lisa "Left Eye" Lopes.

Metro Times: In 1994, during an interview with Vibe magazine, Lisa "Left Eye" Lopes said that the phrase "CrazySexyCool" didn't describe you all individually, but it described all parts of every woman. Twenty-seven years later, do you feel that definition is still the same?

Chilli: CrazySexyCool is our version of "I'm Every Woman." When you say crazy, it's not necessarily "crazy" as in doing stuff that's outlandish, you just have a crazy side where you may be spontaneous about something. Every woman possesses that. Now, you may have more of one characteristic trait than the other, like you may be more cool than the other two, but every woman has all three.

MT: From what you can recall, what was your favorite memory or moment while recording CrazySexyCool?

Chilli: I think my most fondest memory was working with Babyface. He was always my favorite because people didn't know he had a silly side, but we always brought the silliness out of him. We could always bring the silliness out of everybody. Those sessions with Face were just priceless and meant so much to me and helped me grow so much when it came to my vocals. He's one of the best vocalists and he really knew how to get the best out of you. He had me doing things that I didn't even know my voice could do. That was the album that showed me what I could do with my vocals. It showed the growth from the first album, but maintained the essence of what people like about TLC.

MT: When it comes to classifying TLC, I would classify you as a pop group versus an R&B group. Do you think the fact that you were three Black women is why most people refer to TLC as an R&B group over a pop group?

Chilli: We always correct people when they say we're R&B – no we're not. Not to take us out of that, but when you sell a certain amount of albums in a week, you have to see it for what it is. "Unpretty" is not an R&B record, it's pop. "No Scrubs" is not an R&B record, it's pop. I honestly don't even like to put ourselves into any type of category — we are TLC and we make TLC music. We have had issues and conversations about being put in one box because we are Black. I don't know why it's like that, but it is.

MT: CrazySexyCool was certified diamond in 1996. That means you sold 10 million copies of a record during a time when digital didn't exist. People were physically going into the stores to purchase a copy. Did you ever think that would happen or the album would be received that way?

Chilli: You always hope things will happen, but it doesn't mean it's going to happen. Even hearing you say it now is just crazy, because it's something I don't think I'll ever get used to. It is definitely a blessing to be able to have the team that we have and create music that eventually would stand against time. It's such a blessing and I am grateful.

MT: We have to talk about the baby hair. Since 1992, you've been rocking the swirled edges and are often referred to as a baby hair icon. Was it just a thing you started doing?

Chilli: You'll be shocked to know, it was Cindy Crawford. She was on the cover of Cosmopolitan magazine wearing this beautiful red and she had baby hairs. I remember seeing that and was like "I'm going to try it." I just started doing it and here we are today.

MT: One thing about TLC, it always seemed like you really got along as a group. Even when certain situations or frustrations became public, it always seemed more like a familial connection than a business connection. How did that relationship help you all survive in an industry that was designed to tear groups apart?

Chilli: Let me tell you something, we had a shoot during our first album and this particular day they were both getting on my nerves. We were on set and I was like "Tionne better not touch me," and "Lisa better ot touch me." The photographer took our pictures and when I saw the proofs and I looked at it, I had an "Aha" moment. I knew something was special about our group, I knew it before they did, it felt like we were supposed to be together. There were days we wouldn't get along, or there would be two against one, but we were family and we always stuck together. This is deeper than a marriage and divorce was not it. Even with Lisa not being here, we never thought about replacing her, we can never replace her. All we can do is carry on her legacy. I still love her and I miss her with all of my heart. Tionne is my sister. Lisa is my sister, that's our bond and it can not be broken.

MT: Speaking of Lisa, she died in a car crash on April 25, 2002, and by that fall TLC had a new album and music video drop. You all had to continue working through one of the most difficult times as a group. What was that like? How did you handle the recordings and hearing her voice? Did it help with the grieving process?

Chilli: It was the most difficult thing ever, it was hard. We did not get the chance to grieve properly. The label wanted to put out a greatest hits and we were like our sister just passed away. It was really tough. There were a lot of things that we didn't agree with. When we would perform and her parts would come, and the screens would come up, we could never look at the screens. I remember we performed, I believe at the American Music Awards ... I remember I saw the screens and I had to hurry and get off the stage because I broke down. It's one of those things that time helps, but you would have those moments where it just hits you and it hits you very hard. We were always close, but after Lisa passed, Tionne and I became even closer.