A Detroit art promoter and a Romanian engineer collaborated to make the haunting WWII doc 'Terezin: The Fortress of Lies' 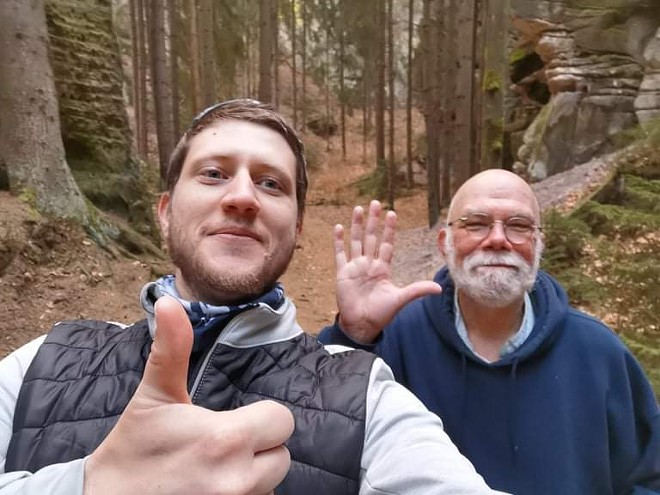 How did two friends in Prague spend their coronavirus shutdown time? Well, Rick Manore and Florin Radoi decided to make a documentary about Terezin, an early Nazi camp situated in the north of the Czech Republic in an area known as “The Garden of Bohemia.”

Radoi was interested in filming with drones and brought one along. The Eureka moment came to the pair after the first few shots. They decided to make a short film called Terezin: The Fortress of Lies, which debuted on YouTube in May. It's seventeen minutes long, a mix of the remarkable drone footage, historical photos and film, haunting music chosen by Radoi, and is narrated by Manore.

Financed entirely by Radoi, the short film was realized by the drone, a laptop, a GoPro camera, many sleepless nights, and an endless supply of peanut butter and chocolates as their MREs. So far many diverse communities have gotten in touch with the pair of budding filmmakers — WWII historians, museums, and scholars, whose life work is the Holocaust, have all been clamoring to speak with the pair.

Terezin may be most infamous in history as the Nazi camp that was given a morbid facelift to fool the Red Cross, which was interested in how the Third Reich was treating European Jewry. Kids were given hand-me-down clothing and costumes for singing and even acting in plays with the Red Cross as an audience. The ruse worked. The ghetto was then made into a labor camp, which became a death sentence.

It is a harrowing piece of work. Both men told me it is the best that they have ever done. Most of us are bingeing Netflix and gaining weight on our couches during this lockdown. But USC Class of ’79 film grad Manore and Radoi, father of a one and a half year old daughter who he has not seen in months, decided to use it to realize a different frightening story.

I asked them both a few questions regarding the nuts and bolts of the process.

Rick Manore: I'm sure many documentaries have been done minimally. We had many limitations, but as I have always extolled, "it's the limitations of the medium that informs and inspires creative solutions to overcome your limits."

MT: Who financed Terezin: The Fortress of Lies?

Manore: Florin basically did. His large talent and big job!

MT: Did the two of you work together on editing and was it the longest process in the film's creation?

Manore: No, that was all Florin. I would say yes, the editing took the most time. We used very low tech software for editing. Florin worked magic with very little, which is understandable being a PhD in Engineering

MT: Did you have to pull permits even though you did not have actual access to the museum?

Manore: No, we clandestinely flew the drone. The town was basically deserted, so we went everywhere we could during two separate visits. Most places we shot were public property. We launched the drone at one point next to the police station. A cop walked 15 feet away and didn't say a thing

MT: Talk about that impressive drone work. In many ways drones offer better footage to work with than a crane or a helicopter.

Manore: The drone shots actually realized the story, giving us a unique perspective to these giant fortresses. It kind of built organically from there. Florin did all of the drone shots and flights with a GoPro Karma too. The guy is the youngest person in Romanian history to receive a Doctorate in Engineering. This was his very first foray into filmmaking.

MT: Did the 75th Anniversary of VE Day affect the work process? Did it create a deadline of sorts?

Manore: Yes it did. We realized this while editing. It did create a definite deadline

MT: Did you write all of the narration Rick or was it a collaboration?

Manore: I wrote and narrated it. I did the research too, so I could keep the focus on the narrative. Believe me, this place had many more dark corners that we just didn't have the time or accessibility due to the quarantine.

MT: You had brilliant sunlight for filming as the May Prague skies were blue with only scattered puffy clouds. Did you just get lucky or did you have to wait out bad weather?

Manore: We shot two days in Terezin, about one week apart. High sky one day, great gray clouds the next. It worked out perfectly by luck of course!

MT: What did you learn?

Manore: Like I said, the drone kind of informed the whole thing. The empty streets, the lack of people (it's nearly like that during normal times) really created a somber and lonely environment, which we found out is attributed to the town's dark past. Even the Soviets ignored the town and it's past during the Communist era. You basically get the feeling that there's more ghosts there than people. It's actually quite unnerving and of course, sad.