A Detroit stylist is making waves with hair-raising debut exhibition

When country music icon Dolly Parton said "the higher the hair, the closer to god," we doubt she had any idea just how close you could get with a little extra ingenuity, construction know-how, and a whole mess of hair spray. Kristina "The Glam Tech," a Detroit hair sculptor and owner of Studio Glamour in Grosse Pointe Park, is reaching for something a bit different — high art status.

Some of what Kristina designs out of her home and her metro Detroit studio are colorful, showstopping, gravity-defying feats of engineering. Of course, most of her styling clients desire more wearable styles or traditional cut and color treatments. But those who request one of Kristina's avante garde structural styles usually have plans for an event, wedding, or photo shoot and leave her chair several inches taller and a bit brighter.

For these styles, Kristina works with the person's natural hair to blend hair pieces that she colors and constructs, giving the illusion that the model or client grew it naturally while also keeping the inner structure hollow so that it's comfortable to wear. This goes for some of the structures she creates on head forms, too, which utilize lightweight wire caging to help build height and width. However, sometimes creativity comes before comfort, as was the case with one of her earliest works in 2006, which was constructed with actual car exhaust pipes.

"We've elevated to where we don't do our models like that anymore," she says. "Now we're making pieces that can just go on the mantle or go on the wall."

Kristina says she first started experimenting with hair in the '90s while still in high school, where she learned traditional techniques, as well as more trend-specific sculptural styles made popular by Detroit's revolutionary Hair Wars scene, a long-running, nationally touring show founded by David Humphries, aka Hump the Grinder. Initially, Kristina was going to do hair to pay for college and her anesthesiologist training.

The life she chose instead is one she says she's created.

"In order to have a creative release from doing hair in the salon — because you're limited to what the client's comfort level and lifestyle is — I started doing hair competitions and shows where you get to do fantasy hairstyles that are more creative and avant garde," she says. 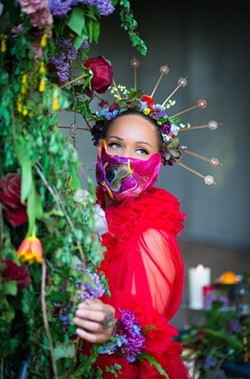 It was only a couple of years ago that Kristina began thinking out of the box and off of the head. In 2018, she approached her neighbor, interior designer Sam Sobh, to see if she could create a piece to be placed in his entry for the 22nd annual Junior League Detroit Showhouse, a design showcase that invites dozens of interior decorators to spend several weeks overhauling and reimagining an assigned room in a Detroit home with the hope that the homeowner purchases or keeps some of what a designer has done. Sobh agreed and Kristina learned she would be contributing a piece to Sobh's lounge concept within the historic Charles T. Fisher mansion in Boston-Edison owned and occupied by actor Hill Harper (The Good Doctor) and his family. As someone who primarily specializes in women's hair, this presented Kristina with an artistic challenge.

"When he told me that it was for a man, which happened to be Hill Harper, I was like, wow, I can't put a feminine piece in his masculine room," she says. "He was really doing like a man cave room for him. So I tried to think of something universal. And so that's when I came up with the sax — that's where that idea came from. And then from there I decided, well, if I can do that, then I can sculpt anything."

The sax, nicknamed "the hairy sax" is exactly what it sounds like. For the showhouse, she curated swirls of blue, gray, and white hair around an actual saxophone to give the illusion of, well, a hairy sax. It was the first piece Kristina had made off of a head form, and it ushered in a new era of creativity for the artist, including her first solo exhibition, Make Waves.

As part of Detroit Month of Design, Kristina will display her contemporary and reimagined hair-sculpting techniques, which will include canvas and large-scale sculpture at Playground Detroit. This will be the first time she is given an entire gallery space to fill with her work.

"Last year, I was a part of Design Month and had a couple pieces at Detroit Is the New Black. But everything in here will be my work basically on display, filling the whole space. So it's quite an endeavor because when I initially applied, [I thought] that was going to be kind of a situation like last year where I just have to complete a wall. And when we had to pick venues, I picked Playground Detroit because it's a gallery, and I wanted to be in that space," she says. "And I'm new to it. So I want to make sure I align myself with people that I can learn from."

Kristina was one of six recipients of the Design in the City competition, which awarded $2,000 grants sponsored by Gucci as part of its new Changemakers Impact Fund. The distinction not only gave Kristina some cash to create with, but also access to resources to help her make her own waves. She was hesitant to apply for the funding, however, because it was intended for Detroit fashion designers, but director of Design Core Detroit Kiana Wenzell told her to give it a shot.

"I was like, well, I'm not really a fashion designer and make clothes, and she was like, 'Hair is an accessory, just try it, your work is amazing. Just do it.' And so I still was dragging my feet and then afterwards she sent me the link to it. And then right after that, we got into quarantine. So, sis had time."

Her fashion entry? A totally relevant face mask made with rainbow-colored strands, complete with a valve.

"Since we're in this mass trend and it was a fashion competition, I decided to make something fashionable, relevant, and cool."

Creating a solo exhibition has been a challenge for Kristina, who says a single piece can take one or two days, with few breaks, and can cost hundreds of dollars in structural elements, hair, color, treatment, canvas, and other display components, like larger-than-life mannequins, human-sized display boxes, and canvas. Kristina says that unlike other fine-art mediums, there's no rulebook for adhering hair to a canvas, affixing car parts into a weave, or making a functional face mask out of hair. It's been an exhilarating and daunting task that Kristina says has led her to consider formally teaching hair sculpture someday.

"Once I figured out what I'm going to make and how many pieces, then I had to figure out how I was going to execute it and time management, because I'm not a full-time artist yet. So that's a lot of research and development. I'm introducing this — there's no one I could ask. There's no YouTube videos. You just have to figure it out. And so that part has been really fun. I've had one of my friends — she's a hairstylist from Chicago — she's been helping me, and my uncle is an engineer," she says. "You need an engineer."

"I'm excited to showcase and introduce this art form and hopefully it takes off so other hair artists can maybe partake and grow this genre of art," she says.