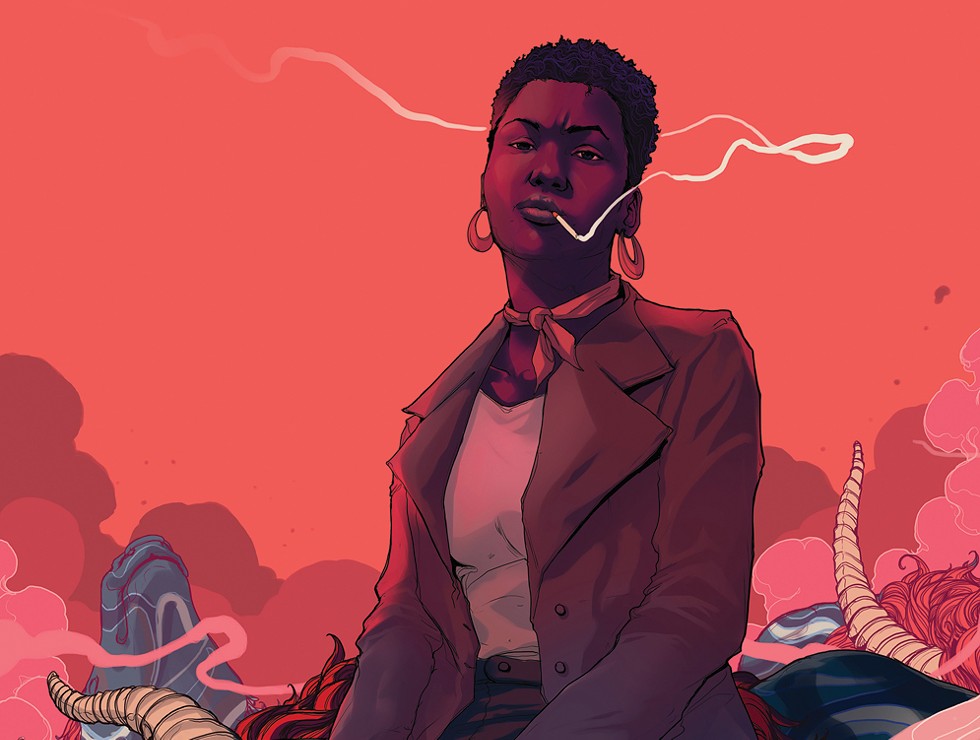 As an author, metro Detroit native Saladin Ahmed has explored many fantastic settings. His debut novel, 2012's Hugo Award-nominated Throne of the Crescent Moon, takes place in a fantasy world that owes more to Middle Eastern lore than the Medieval Europe typical of the genre. And last year's Black Bolt, his debut Marvel comic series, dusted off an obscure Fantastic Four character and locked him up in a high-security space prison in a meditation on the prison pipeline.

But for his latest comic, Abbott — released Wednesday by indie publisher Boom! Studios — Ahmed has set his sights on a setting that is much closer to home: 1970s Detroit.

The series marks Ahmed's first creator-owned comic book — meaning it features all-new characters and stories, as opposed to established heroes. In this case, the titular character is Elena Abbott, a cigarette-smoking, ascot-wearing reporter trying to uncover the dark forces behind a string of mysterious murders.

"It's my tribute to a familiar sort of figure in TV and comics and movies of the paranormal investigator," Ahmed says. "It's this character who finds some occult secrets behind the everyday life that others don't get a glimpse of." (Think of shows like The X-Files, Twin Peaks, or, going back to the 1970s, Kolchak: The Night Stalker, which Ahmed says was a particular influence on Abbott.)

"It's just this type that people are interested in, this dogged investigator," Ahmed says. "For me, I wanted to tell a story with that sort of protagonist — but maybe not the type that always seems to be at the center of those stories."

In Abbott's case, that means "a main character who is woman, who is black, who is bisexual," Ahmed says. "She's all of those things in an era where there's a lot of hostility, particularly in the workplace, toward people who are not straight white guys."

Given the ingredients, it might be easy to assume Abbott is a campy blaxploitation sendup. It is not. Ahmed sets the story in 1972, against a grim backdrop of post-1967 racial paranoia. It begins with Abbott investigating a gruesome crime scene involving a decapitated police horse, initially believed to be perpetrated by Black Panther "negro agitators."

"I'll tell ya, kid, I hope it wasn't negroes — it's gonna mean hell for you people if it was," one character tells Abbott.

"It's going to mean hell for us either way," Abbott replies. "This sort of thing always does."

Ahmed, an Arab-American who grew up in Dearborn, admits he is writing about this world from a bit of a distance. He was born in 1975 — too young to have a real firsthand knowledge of the era. "But I was raised in a very political family, in very close proximity both culturally and physically to Detroit proper," Ahmed says. He says his father (Ismael Ahmed, founder of the Arab Community Center for Economic and Social Services as well as the Concert of Colors), had friends who were Black Panthers. "I saw a lot of that kind of activism around me, growing up," he says.

Ahmed says he conceived of and pitched the story during the past year, while Detroit was re-examining the 50th anniversary of the 1967 rebellion, though he says it wasn't necessarily inspired by the milestone. "With any writing project, I guess the thing is there are always these pieces that are floating around in the back of your head," he says. "You never know what they're actually going to get attached to. So there are probably pieces of this that go back many years."

The years immediately following the events of 1967, Ahmed says, have long been framed as a period of decline. Abbott offers a more nuanced look. "I think what that misses is the fact that there was really a renaissance — a hard renaissance, an uphill renaissance — for black culture and black people in Detroit at that time," he says. "So Abbott the book is sort of situated there, looking at this as a really complicated moment — maybe more complicated than it's been given due."

There are other reasons Ahmed says that steered him toward a period story, citing the popularity of "lovingly rendered recent historical nostalgia" as seen in hits like Stranger Things. Plus, "from a storytelling standpoint, it's really fun when your characters don't have cell phones, or the internet," Ahmed says.

Setting the story in the '70s also offers Ahmed the chance to explore contemporary issues through parallels to our time. "There are all sorts of little echoes that maybe work better when we're thinking about the past rather than trying to set something right now," Ahmed says — like a parallel between President Richard Nixon and Donald Trump, or the persisting theme of "two Detroits: one white, one black," as Abbott muses.

"No one ever asks, 'Why is this cop a white guy?'" he says. "No one asks, 'Did that just come with the story organically, or did you do that on purpose?' I think the answer in both cases is a mix. We have these characters that just come to us, but all of our political and cultural baggage is going to always come into it."

For Ahmed, he says researching his character involved lots of reading and talking to women for their perspectives. "You do your due diligence, but ultimately I'm sort of resigned to the fact that I'll get lots of stuff wrong," he concedes. "Inevitably that's going to mean me writing something that isn't true to somebody else's experience. But for me, all I can do is honorably make the attempt, listen when I get it wrong, and just keep trying to push these stories out there, both in my own work and in other creators' out there."

Abbott is slated for at least a five-issue run, with new issues coming out each month (available locally at shops like Vault of Midnight, Green Brain Comics, and Detroit Comics). "There's the possibility that it could return for later 'seasons,' as it were," Ahmed says. "But there's a lot of other plates in the air right now."

Those other plates include a contribution to Star Wars: Canto Bight, a collection of short stories set in the casino city featured in The Last Jedi, which was published last month. Then there's Exiles, another Marvel series due in April that Ahmed describes as "a really wacky mix-up of a book" featuring existing characters from various universes (including Valkyrie from the latest Thor film, and, for shits and giggles, a cartoonish, baby version of the beloved X-Men tough guy Wolverine). He also says he is "perpetually working" on a second Crescent Throne book, and that he's working on various other "secret" projects.

But no matter what comes next, readers can expect Ahmed to continue to push the limits of the types of characters and the types of stories he tells.

"I'm definitely consciously invested in having characters of color in comics," he says.

Below, scroll through a preview of the first few pages of Abbott No. 1: