A peck of picklers

A number of small local food vendors create small-batch pickles for the people. 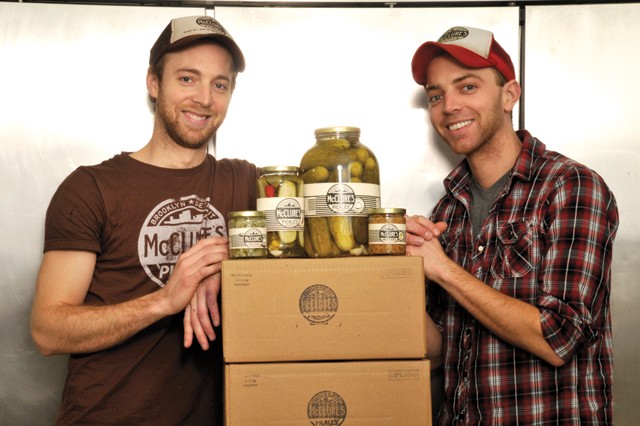 Brinery honcho David Klingenberger got into farming as a high school student, after finding his way out to Tantré Farm, an organic farm on the outskirts of Ann Arbor. After learning organic farming hands-on, he started looking for ways to extend the use of farm-fresh food by preserving it in traditional ways.

Klingenberger uses an ancient style of pickling known as lactofermentation, fermenting vegetables in brine. The results are unusual, as beneficial bacteria living wild on the produce do the work.

"I like a good vinegar pickle," Klingenberger says, "but it's like comparing sourdough bread to quick-rise dough. It's really good."

In addition to pickles, tempeh and a wide variety of sauerkraut styles, Klingenberger also makes kimchi, a Korean style of pickled cabbage. His products are sold by the jar, cold-pack style, which means they're kept on ice when sold at farmers' markets, or refrigerated when sold in stores.

Thyme and a Bottle, Clarkston

Sharon Matzelle and her sisters came up with the pun-themed business name when they started making flavored vinegars together in 1994. Now it's her own business, and Matzelle's specialty has become pickles.

Matzelle relies on her special apple vinegar to impart flavor, spending a few weeks to turn it into a dill-garlic vinegar, then adding rosemary, sage and salt to create the brine. Cucumbers, sliced into chunks, are packed into 16-ounce wide-mouth jars, and the product is refrigerated for several days before being sold on ice at several farmers' markets.

Matzelle says, "My pickles are all-natural — no preservatives — so it's a refrigerator pickle that you need to eat in a couple months for the best flavor. And if people bring back empty jars, I give them a little bit off their next purchase."

Brothers Robert and Joseph McClure have brine in their bloodline, as pickle-making was a family tradition. They base their pickles on their great-grandmother's spicy pickle recipe, and have expanded from that to produce garlic dill pickles, spicy pickles, garlic dill relish and spicy relish, even extending their brand into a Bloody Mary mixer and potato chips. Their pickles are mainly hot-fill and shelf-stable pasteurized, with some refrigerated pickles and even a bit of seasonal fermentation.

In six years, they've proved that it's a dilly of a business model. Two years ago they addressed the Troy Chamber of Commerce, and this year they've expanded their operations, moving into a larger building in Brooklyn that formerly housed a Pfizer plant, and another larger space at American Axle in Hamtramck.

Pickler Blair Nosan got started on pickles while living on a Jewish Farm in Connecticut. "We made a variety of pickles in the ways of the old world," Nosan says, "using fermentation instead of vinegar. I was so charmed by the process and the incredible flavors, I brought my skills back with me when I returned to Michigan."

Now her pickle products can include parsnip kimchi, butternut squash kimchi, dilly beans, and fennel and turmeric cauliflower. She has sold them on a "subscription" basis for the past two years, but she hopes to soon be operating out of a licensed kitchen and selling at area farmers' markets.