A pioneer speaks out 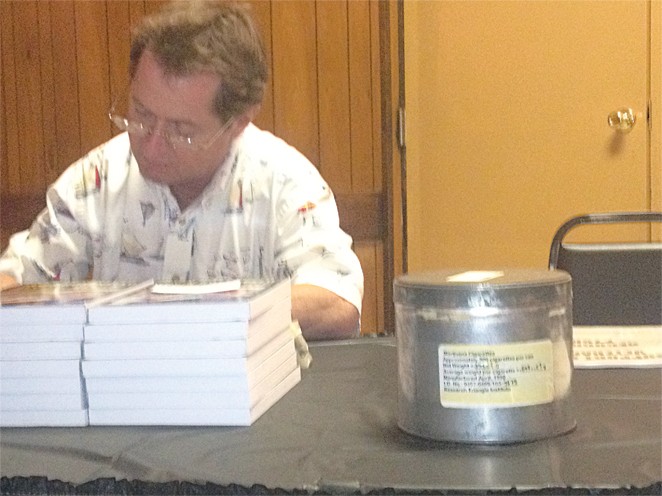 Irvin Rosenfeld is one of the four surviving federal medical marijuana patients. There were once 13 of them, and Rosenfeld has been receiving his allotment longer than any of the other survivors. He gets a canister with about 300 rolled marijuana cigarettes from the government every 25 days. Instructions printed on the can instruct the patient to smoke 12 of them each day.

Rosenfeld, who has a bone disease called multiple congenital cartilaginous exostosis, which causes tumors to grow on the long bones of his body, was in Michigan last week to lobby the state Legislature on pending bills that will affect medical cannabis patients and their access to their medicine. He also spoke at a Downriver Community Compassion Club (DCCC) meeting held at Donovan VFW Hall in Dearborn Heights and sold a few copies of his 2010 book, My Medicine: How I convinced the U.S. government to provide my marijuana and helped launch a national movement.

It was a heck of a meeting for the 60 or so attendees, who also got to hear from Hiedi Handford, publisher of the Montana Connect (a medical cannabis publication), and Dan Solano, a former Detroit police officer and member of Law Enforcement Against Prohibition. Solano gave a status rundown on 11 pending bills in the state Legislature.

Rosenfeld was clearly the star of the evening. He began with: "I'm going to thank each and every one of you for paying for my medicine." That's because the cannabis he receives for free from the government is paid for by our tax dollars.

Rosenfeld was diagnosed with more than 200 bone tumors when he was 10 years old and was told that he probably would not live through his teen years. He suffered severe pain and pain-related insomnia, had several operations over time to remove tumors that got in the way of normal activities. After one operation to remove tumors from his leg he had to learn to walk again. He was prescribed drugs from alcohol and methaqualone (qualudes) to Demerol, valium and morphine. During high school, he became an anti-drug activist arguing against the use of marijuana and other recreational drugs.

It was during his freshman year of college in 1971 that Rosenfeld gave in to peer pressure and tried marijuana. It didn't get him high — it still doesn't — but within a few weeks he realized after smoking that he'd been able to sit still for a half-hour while playing chess. Normally after about 10 minutes the tension in his legs forced him to get up and move around. He also realized that he hadn't taken a pill in six hours — a long time for him in those days. Rosenfeld began researching marijuana and found out that it had once been used in tincture form to treat muscle tension, inflammation and pain. Well, one thing led to the next and soon Rosenfeld was puffing away on a daily basis and watching his health improve while taking fewer of the pills he had been prescribed. He stopped smoking to see what would happen. His health declined. He went back to smoking and got better.

"It was now very clear to me that cannabis was a great medicine and that I had to have it," he wrote in My Medicine.

Rosenfeld became an activist and many of his activities are chronicled in his book, including his 10-year bureaucratic and legal battle for government-issued marijuana. But his appearance at the DCCC meeting was more about what's happening now. He specifically criticized Senate Bill 977, sponsored by Sen. Rick Jones (R-Grand Ledge), which would take glaucoma off the registry as a medical marijuana qualifying disorder. Studies have shown that cannabis use decreases intraocular pressure in glaucoma patients. It should be used in combination with prescribed eye drops to make the medication more effective. However some medical marijuana patients stopped using their prescribed medication, which can lead to problems.

Several times during the meeting, speakers exhorted attendees to lobby their representatives, and there was contact information available at the meeting for anybody interested in doing so. "Every phone call you make counts 20 times," Rosenfeld says. "That's how seriously legislators take those calls."

SB17 would prevent the formation of medicinal marijuana clubs and SB377 would make MMMA registry information available to law enforcement officers. There are more but I'm not going to detail them all in this column. They were supposed to come up for a vote on Sept. 11 but didn't.

"At this time Jones doesn't have the votes," says Solano, who opined that activists need to stay in contact with their representatives on these issues in order to keep Jones from lining up enough votes to pass these bills.

Most folks watching the machinations of government and marijuana believe that reclassifying marijuana from the prohibitive Schedule 1 to Schedule 2 or 3 is on its way, and that pharmaceutical companies have cannabis-based drugs in the pipeline to take advantage of that change. Rosenfeld said he'd rather see total cannabis declassification, which would take it out of the hands of government and big pharma entirely.

Handford, who works with a number of medical cannabis organizations across the country, also spent a couple of days lobbying in Lansing. "Sen. Jones is not our friend," she says. "When you walk into legislative offices to lobby you cannot be emotional. When you get in there get straight to it and to the point. Don't ever give up."

She also told patients and caregivers that they should experiment with all parts of the plant — leaves, stems and roots. "Grind them up, extract them; let's have zero waste in this industry."

I was impressed with the DCCC and how much business they seemed to get done at the meeting. They leave the growing classes to others and focus on protecting their rights. The club just received its federal 501(c)(3) nonprofit status, which made the $300 winning auction bid for one of Rosenfeld's supply cans tax deductible. The club took care of business, got all their speakers up (there were no problems with the sound system), ran an auction and a raffle, took questions from the audience, and called for lobbying action from the membership. If all clubs ran with such judicious dispatch the political end of the medical marijuana movement would be in very good care.

I was also impressed with Rosenfeld, who left us with these words of wisdom:

"I always want to push the envelope as far as you can. But don't push it until you get arrested. If you go to jail your family goes on welfare and that's not good for anybody. As far as I'm concerned, cannabis is the fountain of youth."

Maybe it is. One guy in the crowd announced that he'd been smoking cannabis since 1948. He didn't look that old.