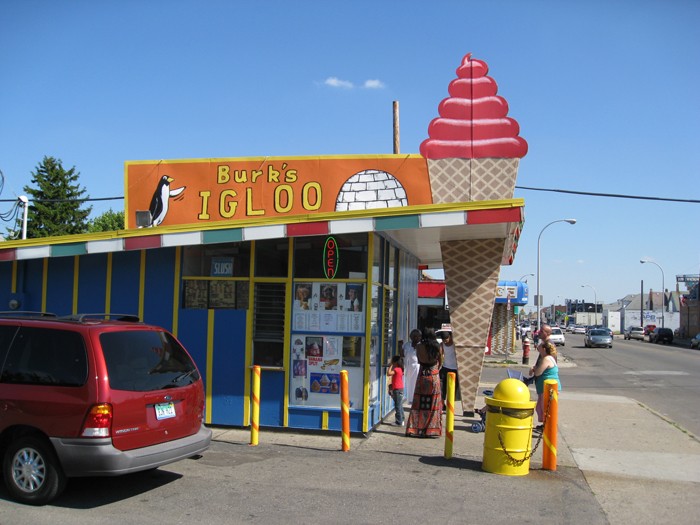 Bob Jo’s 4071 Fort St., Wyandotte; 734-282-6818: A fixture on Fort Street since the late 1950s (it was moved from Eureka and Fort, where it was founded in 1947), this Downriver roadside stand specializes in custard and yogurt, and patrons aren’t fussy. Most people seem to like their “twist cones,” the familiar combination soft-serve treat. Each week, Bob Jo’s offers vanilla and chocolate custard and a twist, as well as one of about 25 special flavors (it changes from week to week; past flavors have included Blue Moon). They also serve frozen yogurt that’s free of sugar, cholesterol, and fat. Sprinkles are extra, but they offer no hard-shell ice cream topping. Bob Jo’s closes for the season in mid-September.

Burk’s Igloo 10300 Conant St., Hamtramck; 313-872-6830: The corner cone booth adorned with a cartoon igloo and a friendly penguin attracts people of all ages with popular short-order menu items ranging from a coney dog and fries to their best-selling Avalanche ice cream dessert. The Avalanche (similar to Dairy Queen’s Blizzard) starts with a tiny 12-ounce and ranges all the way up to a monster-sized Avalanche, which comes complete with 44 ounces of soft-serve ice cream crammed with whatever kind of candy you — and the kid inside of you — crave. Burk’s has kept locals lining up for their ice cream since the 1960s, and is open this summer from noon to 10 p.m., seven days a week. Dine outdoors at picnic tables and enjoy the sort of people-watching only Hamtramck can offer.

Calder Brothers Dairy 1020 Southfield Rd., Lincoln Park; 313-381-8858; calderdairy.com: Having logged 68 years of operation, the Calder Brothers’ spot may be the last remaining Downriver dairy taking it from cow to cone. They still make their ice cream fresh, right on their own farm in Carleton, using milk from their own moo-cows. They do not use artificial hormones to enhance milk production, instead relying on healthy feed rations, good management and lots of TLC. (The cows even have their own nutritionist!) And the resulting ice cream is served up in cones, malts, and shakes in their own ice cream parlor (open noon-10 p.m.). Or load up on a wide variety of dairy products at their adjoining store, where you can find more than 30 flavors of ice cream by the half-gallon and even full gallons. Flavors range from reliable vanilla to the more adventurous like cinnamony horchata, cake batter, and “Holstein paradise” — coconut with chocolate chips and almonds. The ice cream is reportedly notable enough to draw the occasional out-of-state visitor. Drop in and find out why.

Clark’s Ice Cream & Yogurt 3312 12 Mile Rd., Berkley; 248-541-6560: With about 60 different flavors, Clark’s is a well-stocked roadside stand with a small lobby inside and benches and picnic tables outside. The stand has been in business for over 30 years, as Clark’s for more than two decades. They sell Blizzard-like Clark’s Chillers, with soft-serve, Oreos and Butterfingers, as well as a host of hand-dipped cones. The most popular flavors of ice cream include “moose tracks” (a vanilla-chocolate mixed with peanut butter cups), amaretto cherry and butter pecan. Cones come in regular, sugar and waffle. A two-scoop cone runs between $2.25 (child’s size) and $4 (adult size). Open from noon to 10:30 p.m..

Custard Hut 25947 W. Warren St., Dearborn Heights; 313-278-5577: What makes frozen custard so much richer? It’s the formula that calls for higher butterfat content, giving an added richness that draws many into this venerable custard shop. They do vanilla, chocolate, a vanilla-chocolate twist, and a flavor of the week that they can also twist with vanilla. They have about a dozen special flavors they rotate through. Cash only.

Guernsey Farms Dairy Family Style Restaurant 21300 Novi Rd., Northville; 248-349-1466; guernseyfarmsdairy.com: You can go to Guernsey Farms just for an ice cream cone, or to buy dairy products from a little convenience store, or you can go for a meal. For less than $5, the black-and-white sundae — a combination of chocolate and vanilla ice cream with marshmallow and hot fudge, sprinkled with nuts, piled with whipped cream, and a cherry — is a meal itself! Guernsey Farms has kept families lapping up quality ice cream since 1940. With 48 flavors available at any given time (and many more in production), as well as an assortment of cones, sherbets, sorbets and other ice cream desserts, you’ll probably have a hard time deciding what to order. There’s no need to worry — free samples are available upon request. If you’re stunned by the selection, ask for butter pecan, take a seat outside in the shade on one of the many boulders and lick it up — you won’t be disappointed. If you can’t get enough of the creamy delights, most flavors are available in both half-gallon and 3-1/2 gallon sizes for purchase. Other products include chocolate milk, skim milk, probiotic milk, sour cream, chip dip and more.

Leason’s Dairy Bar & Grille 11475 E. 13 Mile Rd., Warren; 586-977-2680: If the neon-orange sign doesn’t attract you, then the nostalgic ice cream shop atmosphere certainly will. Family-owned and operated since 1970, this shop has a variety of soft-serve and yogurt delights, but also offers eight classic ice cream flavors, including cookie dough and “moose tracks.” The “Glacier” is a popular item that mixes some of your favorite candies with vanilla soft-serve. Soft-serve wonders at Leason’s include the “Gold Digger,” with your choice of vanilla soft-serve or yogurt with hard chocolate topping, caramel and pecans; and the “Hot Fudge Crème Puff,” a crème puff topped with your choice of vanilla soft-serve or yogurt, hot fudge and additional toppings. In addition to frozen treats they also serve pitas, gyros, burgers and hot dogs, and even chicken sliders.

Paul’s Market 3700 Monroe St., Dearborn; 313-278-2222: A former ice cream stand, the new owners at Paul’s have branched out, but they still have the ice cream, usually about 24 flavors, including ice cream made on Mackinac Island, a genuine Michigan product.

Ray’s Ice Cream 4233 Coolidge Hwy., Royal Oak; 248-549-5256; raysicecream.com: This family-owned ice cream parlor has logged a half-century in the business. They make gourmet ice cream on-site, more than 50 flavors of it. Among the favorites are butter pecan, “Huckleberry Pie,” “Almond Joy,” blueberry pie and black cherry. Unique to this shop is the “Fat Elvis,” a confection made with banana and peanut butter — in honor of the King’s love for peanut butter-and-banana sandwiches. They have a small fountain area, a counter and booths to seat 25, in addition to two seats from old Tiger Stadium. Though they’re open all year, summer is the season that provokes lines that stretch out into the parking lot. Ray’s also offers gourmet ice cream molds for parties.

Ritter’s Frozen Custard 5962 Meridian Blvd., Brighton; 810-229-6992; 31227 Eight Mile Rd., Livonia; 248-476-4571; ritters.com: Two local outposts of the national chain serving “legendary ice cream.” Folks at Ritter’s say their product is “so much more than just ice cream. It’s smooth and creamy and you can taste the difference with each delicious bite.”

Treat Dreams 22965 Woodward Ave., Ferndale; 248-544-3440; treatdreams.com: Scott Moloney is the emperor of ice cream. Read the flavor board in his Ferndale bakery and micro-creamery and you might believe that you’ve somehow entered a fantasy world where anything can be made into a dairy-based dessert. Who knew that purple yam, potato chips, jalapeño peppers and chicken are all legitimate ice cream ingredients? In Moloney’s able hands, unconventional but inspired flavors just keep coming. He reckons he has made more than 100 flavors, with another 50 or so written down and an additional 30 to 40 based on customer requests. Some flavors are quite zany (chicken and waffles, for instance), and others simply novel but appealing, such as honey-lavender, lemon-basil, dark chocolate peanut butter curry, salty caramel, avocado-lime, bananas Foster, pistachio-wasabi, and more. Open 1-9 p.m. Sunday-Thursday, 1-10 p.m. Friday-Saturday.

Uncle Ray’s Dairyland 1462 N. Leroy, Fenton; 810-629-1791; uncleraysdairyland.com: The Uncle Ray’s empire includes not just Uncle Ray’s Dairyland, with its hand-scooped, boutique ice cream treats, but also the Heavenly Halo Burger and Uncle Ray’s Mini-Golf. Sounds like an outing for the whole family, with the chance to work off some calories in the bargain.

Wally’s Frozen Custard 22501 Harper Ave., St. Clair Shores; 586-552-5038; wallysfrozencustard.net: Since moving into a new location, Wally’s has expanded everything from their menu to the atmosphere. The classics like vanilla, chocolate, twist or flavor of the week, ranging from $1.40 for a “baby” to $4.60 for a waffle are still available. In addition, there are sundaes, shakes, coolers, floats, slushies, banana splits, frozen custard pies, strawberry shortcake, the avalanche, and more. Their ice cream is sold to go by the pint or quart. What’s more, they have their very own fire engine, which has been converted into a “party engine,” and it’s available for rental.