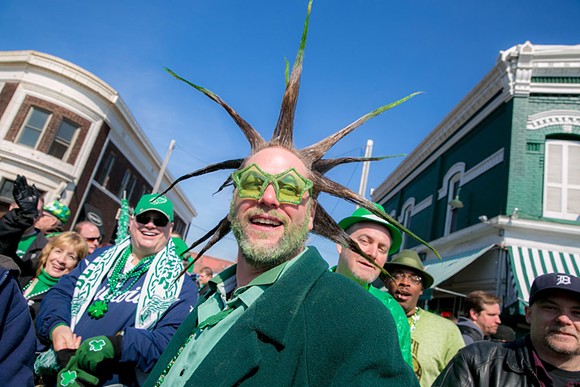 Sunday, 3/12
Gaelic Storm
The Celtic band is headlining Saint Andrew’s Hall the night of the Corktown St. Patrick’s Day parade. Gaelic Storm is internationally renowned for their nonstop touring — and that appearance in Titanic.
Doors are at 8:30 p.m.; 431 E. Congress St., Detroit; 313-961-8961; saintandrewsdetroit.com; tickets are $20.

Sunday, 3/12
Corktown Tavern
Tent party at this Corktown institution includes performances by Nina and the Buffalo Riders starting at noon, followed by the Muggs at 1:45 p.m. and the Reefermen at 3:30 p.m.
Starts at 11:30 a.m.; 1716 Michigan Ave., Detroit.

Friday, March 17
Sullivan’s Public House
Sullivan’s owners will erect a pop-up Guinness bar based on St. James Gate, the original Dublin-based brewery where Guinness was first brewed in 1759. The locally brewed Sullivan’s Irish Ale (from Griffin Claw Brewing Co.) will be on tap, and a menu of farm-to-table Irish-inspired dishes will also be available.
7 a.m. to 2 a.m.; 23 N. Washington St., downtown Oxford; no cover.

Friday, March 17
Old Shillelagh
There’s a reason the Old Shillelagh has been voted “Best Bar in Wayne County” in our Best of Detroit poll. They go all-out every year for St. Patrick’s Day, and this year will be no exception. Detroit Irish-punk-metal-folk band Stone Clover will play sets throughout the day, and a heated tent and a heated outdoor rooftop deck expand the Old Shillelagh’s offerings. (See the bar’s website for a full schedule, starting with “St. Practice Day” on Saturday. March 11.)
Starts at 7 a.m., 349 Monroe St., Detroit; 313-964-0007; oldshillelagh.com.