A talk With Ed Neumeier, Creator of RoboCop 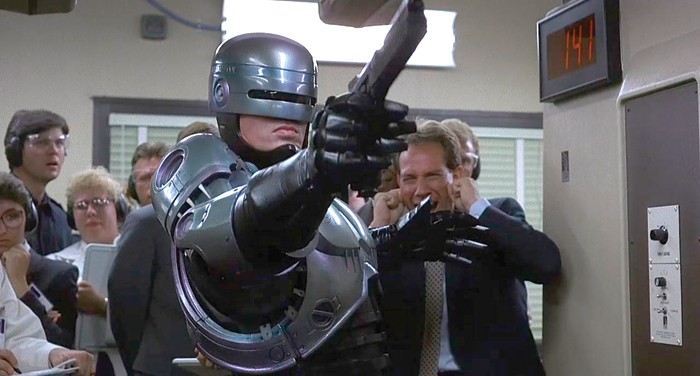 Philadelphia has its Rocky statue. Chicago’s Navy Pier has a bronze Bob Newhart (along with his couch). This year, Detroit is slated to get a 10-foot-tall monument to RoboCop.

“Wouldn’t you rather have fucking RoboCop?” asks Ed Neumeier, who created the character and co-wrote the hit 1987 film. “Nothing against Stallone, nice guy. Mr. Newhart, really funny man. But, I mean, come on!”

Much has been written about the RoboCop Statue Kickstarter campaign and, in many ways, the 1980s science fiction hero couldn’t be a more apt choice for Detroit. For one, the character’s armored suit practically screams Motor City.

“You look at that chest piece and it looks like the hood of a Dodge Ram truck,” Neumeier says. “I remember saying to Rob Bottin, who was the designer, that the more I looked at the design of the suit, the more I thought it was like American road iron.”

Even if you put the American auto industry influences aside, it’s RoboCop’s message of resurrection that speaks loudest for Detroit. Is there a better metaphor for our city’s next act than a murdered man being brought back to life with technology in order to uphold the causes of justice and liberty? Doesn’t RoboCop make a terrific cultural bookend to “The Spirit of Detroit,” with its inscription: “Now the Lord is that spirit. And where the spirit of the Lord is, there is liberty.”

Yes, “classic” RoboCop, as Neumeier has been taken to calling his satirical action film, offered a violently lawless image of Motown. But the heart of the story was the christlike rebirth of Officer Murphy (played by Peter Weller), who not only became a hero to the citizens of Detroit but also rebelled against the corporate masters who sought to use him for their own nefarious means.

And before you start get your knickers in a bind about the silliness of erecting a pop culture icon in a public space, consider how often various Greek gods have been the subject of public statues and friezes. Isn’t Hercules just RoboCop B.C.?

In a phone conversation with Neumeier we discuss RoboCop’s indelible connection to Detroit, the original film’s uncanny predictions about America’s future, the upcoming reboot and, of course, the RoboCop statue. The interview has been edited for length and clarity.

MT: So, let’s start things off with Detroit. When was the decision made to set RoboCop here?

Ed Neumeier: It was always Detroit. I had actually never been to Detroit. We even scouted Detroit for the movie. Nobody thought it was the right look for the picture. But we all believed it was the right city metaphorically.

Detroit was about where America was at in the 1980s. As a kid, I was really into American cars, and I got really upset as a teen, because the America car companies that I loved had started to make really crappy cars. This was a big thing for me. Later, I read a book by David Halberstam called The Reckoning, which affected me pretty profoundly. I realized, “Oh, this is what happened to Detroit and the automobile industry, and it’s what is going to happen to a lot of industries.” It was where the country was heading — there was going to be a big loss of manufacturing as new technologies started coming in. RoboCop was born out of that.

MT: The movie is pretty predictive — even cautionary — about where American policing and security was headed. You depict the privatization of law enforcement, the militarization of domestic security, even drones — though they didn’t fly.

Neumeier: Yeah, the ED-209 could be viewed as a drone of sorts. I used to kid people that if you want to predict the future you should predict how bad something could be, then make a joke about it, and you’ll be right. Really a lot of the film was saying, “OK, this happening now. What would it be like if it was worse?”

Sometimes people ask me, “What did you get wrong?” That would be South Africa. But there’s an asterisk. When we were joking that they had a neutron bomb, they actually had, I think, four nuclear devices. Or six. I can’t remember. But they had made them with Israel. So I always like to imagine that there was someone in South Africa watching RoboCop and freaking out, because they knew that we knew.

MT: RoboCop also had some pointed barbs about the media.

Neumeier: Yeah, I also did that in Starship Troopers. My parents were journalists, so I grew up in a media household. Mostly, it allowed us to be funny. At the time people were unsure of why we chose to make the movie comical. And I said that this is potentially so stupid that the audience should be laughing with us not at us. Humor has always been an important part of the design for me.

I also found you could really cover a lot of narrative ground with the news bits; it allowed us to jump forward in the story. It’s rather cheap to do it that way, but if it’s funny the audience will accept it.

MT: So when did action movies lose their sense of humor? RoboCop embraced satire to comment on American culture the absurdity of the action genre.

Neumeier: I have to blame Hollywood. The studios have this notion — especially post-Christopher Nolan — that everything should be so fucking deadly serious that the audience won’t accept anything else. My sense is that the studios aren’t comfortable with this kind of humor because they think it’s tricky or it’s hard. They don’t quite understand it. They want their comedy funny and they want their action tough, and the two will never meet. People used to mix these tones all the time. John Ford famously loved to put humor into his most serious movies. He understood that in doing so you were creating a dramatic dynamic. If you laugh before something really bad happens, it seems even worse.

MT: The movie went through quite a fight with the MPAA over violence. Do you think you’d have that same fight today?

Neumeier: I don’t know if it’d get the X we got then. We actually got an X three times, where they sent it back to be re-edited each time. Maybe they’d let us slide with an R today.

RoboCop is really violent, though. I say that in an amusing way because it’s not stupid violence, it’s tough. I think the intention of what is happening and the way the director is showing it is impactful. It’s not so exploitative that you can’t watch it, but it definitely affects you.

I also love the aesthetic of blood and the kind of stuff we were doing in the ’80s with squibs. [RoboCop director Paul] Verhoeven and I had this idea about violence: that we both found it rather beautiful — not in real life but in the movies. So, to me, RoboCop classic really works on that level. But that’s because Verhoeven is so good at staging violence. I think [José] Padilha, the director of the new one, is a very talented guy. I’ve seen the new one and, for all the trouble people have with the idea of a PG-13 rating, the movie doesn’t really feel all that less tough. It’s just less bloody. Ultimately, I think it’s about the filmmaking. I think that Padilha isn’t Verhoeven, but he’s his own version of a good filmmaker.

MT: Does Padilla keep RoboCop’s Frankenstein or christ motif of being born anew?

Neumeier: My writing partner Mike and I used to argue over whether RoboCop was a Frankenstein story or a christ story. I kind of thought we were doing both. And then Verhoeven showed up, and we didn’t know it at the time, but he’s an actual Jesus scholar. He was completely fascinated by the resurrection theme.

MT: Detroit just elected Mike Duggan as its new mayor — mainly, it would seem, because of his successful corporate experiences. How did you know he was going to get elected?

Neumeier: I didn’t. But I think every time I turn around the corporate world is taking over. The things I was goofing about when I was 27 are, many years later, here. All the things that I was kidding about have happened … and worse. In the ’80s, there was still that notion that with corporations there was a life commitment. Certainly in Japan. And that’s all gone now. Everybody knows that the corporations have no interest in you or protecting you. I think that’s one of the reasons Mitt Romney lost. People looked at him and realized, “He’s one of those guys.”

MT: I know you’ve heard about the RoboCop statue. Will you come to the unveiling this year?

Neumeier: If I’m invited, of course. And if they don’t invite me, I’ll show up at some point. I may even bring my 85-year-old mom if it happens soon enough. The statue is one of my favorite things about the RoboCop experience. I can’t believe it’s happening.