A week's worth of Detroit's best breakfast dishes

Kuzzo's abound with breakfast possibilities, including salmon croquettes and shrimp and grits, but chicken and waffles are Kuzzo's reason for being, and so it only makes sense to zoom in on their grandest presentation. Michigan chicken gets brined in a mixture that includes hot sauce, for that seasoned-to-the-bone flavor. Then it gets dunked in flour seasoned with Kuzzo's own blend of herbs and spices before its hot-oil bath. By the time the chicken is caramel or dark golden brown, it's got the best crunch. Within 10 minutes, it's on a plate in front of a customer, a breast, a leg, and a wing. But it also comes with two waffles, made using owner Ray Bartell's secret recipe, as well as two eggs cooked to order and a creamy serving of grits, made with love and seasoned with Kosher salt. "The amount of food that you get for the price? You can't beat it," says kitchen manager Oscar Davis. "For $15, you get three nice-sized pieces of chicken, two golden crispy waffles, eggs of your choice, and creamy grits. For $15? You can't beat that."

This family diner specializes in omelettes, and there are many to choose among. If you can't find one to scratch that eggy itch, you can even call your own ingredients, choosing from 14 meats, 12 vegetables, seven cheeses, and such extras as black olives, chili, and shrimp. But we love best their hungry-man breakfasts, especially the unusual, militaristic names. (The better to attack with fork and knife?) There's the Mexican Revolution and the World War I. But then there's the big one: the World War II, featuring creamed, seasoned chipped beef and mushrooms, hash browned potatoes, two eggs, two strips of bacon, and toast. Remember: All's fair in love and war.

This special French toast has a special coating that has kept it a mainstay on the menu for 10 years. They start with white French bread from a local bakery, dunk it in an egg wash, dip the bread into finely ground Cap'n Crunch, and then cook it on a grill. It's then decorated with dollops of whipped cream and a few more crunchies. If using crushed sugar cereal on French toast sounds over the top, consider that the original flavor of the Quaker product was supposed to bring to mind butter and brown sugar over rice, and so the finished toast isn't overly sweet, just enough. Since it's covered in a cereal with "Crunch" right in the name, it does have a pleasant chomp-factor, but you can have it well-done if you'd like it a little crisper. Want some protein? Bomber's Jeanette Penn recommends "the Cap'n Slam," which comes with an egg, two pieces of bacon, and a sausage patty. And don't forget to look around at all the World War II related tchotchkes. 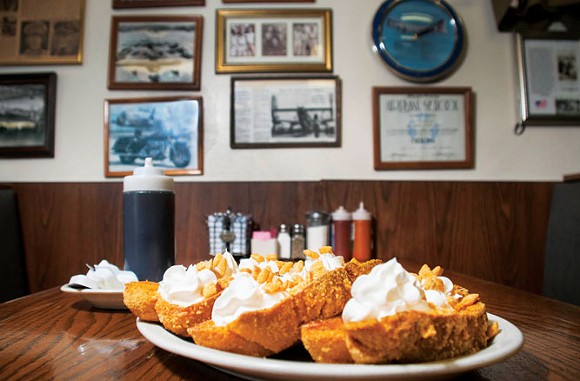 The "Toast Benny" is one of Toast's signature items, dating back to the days when it first opened in Ferndale. It's a more-or-less traditional eggs Benedict. The foundation is a choice of French toast or house-made biscuits. The plate contains locally sourced spinach and heirloom tomatoes, topped with a choice of bacon or ham (or an upgrade to turkey or veggie sausage), all covered in Hollandaise sauces that’s made fresh daily with just a skoche of mild red pepper. Add to that a choice of home fries, Parmesan grits, or bacon fried-rice. (Yes, you heard that last part right: They take Jasmine rice, cook it with bacon stock, and throw in some garlic and shallots with green onions.) Plus, it doesn’t hurt that the restaurant’s dining areas are stuffed with amusing memorabilia that will only help start your day with a smile.

For six years now, downtown Detroit’s Hudson Cafe has catered to the city’s power breakfasters: that means a menu loaded with things that have just a little bit more to them. Their Voodoo Benedict (the place’s No. 1-selling Benedict) is no exception: two house-made pieces of cornbread drizzled with butter, topped with smoked, crumbed chorizo, and then cheddar cheese that’s melted on. It then gets two poached eggs, cooked soft for that runny, gooey feeling when the egg finally explodes. Finally, it’s all topped with “ranchero sauce,” basically a smoked chile sauce featuring, onions, green peppers, green tomatillos, guajillo peppers, adobo chiles, and crushed garlic, a condiment that takes four hours per batch to make in-house. Put it all together and you have a Hudson House classic, designed by owner Tom Teknos, and on the menu since Day One.

One of the solid, simple selections on the breakfast menu at Rose’s, it’s like everything else at the finer diner: real food, made with actual house-made ingredients. Take these flapjacks inspired by co-owner Molly Mitchell’s family recipe from Up North. Mitchell says, “We use a lot of eggs in them, so they’re a little more custardy than your usual pancake. They’re more tender and eggier.” Mitchell says they also makes their own cultured butter by souring heavy cream, “like how you’d make crème fraîche,” and then they “beat the butter out of buttermilk,” form it into rosettes, and place it atop the griddlecakes. “It’s tangy and salty and contrasts nicely with the Michigan maple syrup,” Mitchell says. For added richness, the griddle station can add fruit (usually berries or pear slices) or crumbled bacon for $1.50. Mitchell also points out there’s nothing to stop you from having both added if you want to really get crazy.

Canadian natives Deveri Gifford and Jason Yates moved to Detroit just to open a hands-on neighborhood diner. They just happened to move here as the popularity of that Canadian answer to chili cheese fries — poutine — was on the upswing. They serve a few different versions of the dish, but their vegan poutine may be a first, using hand-cut fries, mushroom gravy, and Daiya vegan cheese. It’s all in line with the thoughtfulness of the owners: always as friendly as possible to dietary restrictions.