A Year In Detroit Books

Now everybody wants to be buddy-buddy with Detroit. 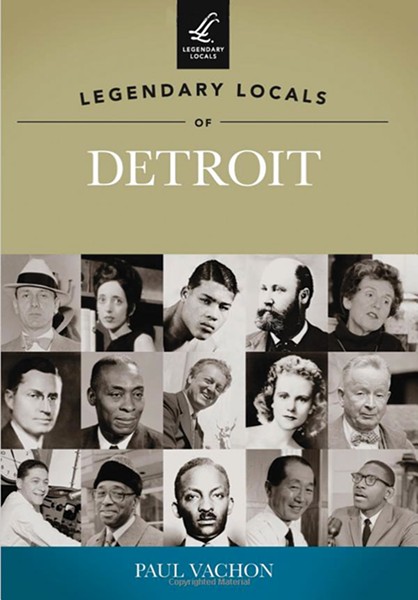 As many longtime readers of Metro Times know, our annual Gift Guide issue is an occasion when we usually take stock of all the books we could find about Detroit over the course of the preceding year. It’s something I started doing about six years ago, when we noticed a definite uptick in the number of titles about our fair city. The longevity of this annual job testifies to the way more and more books have claimed Detroit as their subject or setting.

Looking at the books published this year, however, I’ve decided to take a different approach. That’s because, a dozen years ago, writing about Detroit was something novel, something only people with obvious affection for the topic would try to do. This year, 2013, marked a definite change. If there’s one thing writers can smell, it’s a hot topic that hasn’t been played out. That’s a major reason why this year’s big, hardcover entries have been uniformly unappealing.

In truth, there are many Detroits; and one cannot identify that greater Detroit unless refracted through the lenses of these smaller communities. Add to this the way that, since around World War II, we’ve had an increasingly heated battle for Detroit’s identity. In that raging debate, certain voices that have been heard loud and clear, while others have been fainter. But since the publication of Thomas Sugrue’s Origins of the Urban Crisis (still on sale and a good stocking stuffer for that bookish future urban planner), we’ve seen all sorts of encouraging signs of a renewed effort to look past the bombed-out landscapes, grim charts and cruel statistics, to ask why it all happened, and to hear the voice of the people “in the neighborhoods” past and present. In the wake of Sugrue’s book, Detroit’s new notoriety also seemed to embolden a crop of nascent authors to write small press books on our town, or put out self-published vernacular histories set here. Those quiet voices of the past were beginning to be heard again.

If so, that’s because Detroit is vested suddenly with what ad men call “branding power.” Already a contested territory, this new “Detroit” is more up for grabs than ever. Now it’s besieged by media folks hoping to make a buck off it. All year, we’ve seen accounts of Detroit by carpetbagging feature writers, TV clowns, drive-by documentarians and so many other hucksters that it makes you long for the days when journalists only flew in for the Detroit Auto Show.

The only truly insightful book of the last year, based on decades of experience here, was Scott Martelle’s achievement Detroit: A Biography, which should be required reading for all earnest people trying to understand the Detroit of today. Published last year, it accurately tells the story of how Detroit pivoted from the glorious model city of the (mostly white) working class into a hellhole of largely black poverty. For too many metro Detroiters, this is an uncomfortable topic, which is likely why it has been so ignored hereabouts. And Martelle knows what he’s writing about. He worked for a Detroit daily paper for years until his participation in the Detroit newspaper strike and wound up working elsewhere. No doubt today’s dailies would rather happily burble on about books by writers who crossed the picket line that Martelle walked.

So this time around, I’ll stick to just a few of the more enjoyable books this year. Chief among them was Bob Duff’s Detroit Red Wings (Biblioasis, $29.95, 237 pp.). Subtitled Original Six Dynasties, Windsor Star sports columnist Duff’s book is a love letter to the Golden Age Red Wings of the 1940s and 1950s. In fact, the medium-sized hardcover volume contains almost 300 rare and never-before-published black-and-white photographs, with nary a helmet in ’em. It’s all there, including shots of Gordie, Terry, a referee bleeding from the eye, and “the Boston Bruins and Red Wings … in the midst of a good, old-fashioned donnybrook.” Now, that’s some real old-time hockey for you!

For those looking to put that first toe in the waters of Detroit history, there’s Paul Vachon’s Legendary Locals of Detroit (Legendary Locals, $21.99,135 pp.). Put out by an imprint of Arcadia Publishing, it’s very much in the style of Arcadia’s pleasing photograph-driven local histories. It’s a nice stocking-stuffer, with playing-card-sized histories of Detroit’s notable musicians, moguls, militants and more.

This year also saw the publication of Detroit Rock City by Steve Miller. (No, not that Steve Miller!) Miller is a die-hard Detroit music fan who did hundreds of interviews to compile this oral history that shows the Detroit music scene in all its chaotic glory. We couldn’t get our hands on it, but people we trust said it got it mostly right.

In fact, I found this year’s most enjoyable Detroit books to be works by unprofessional writers wanting just to tell their tales without an angle. A self-published book by Mary Anne McMahon called The Motor City and Me: Our Story ($16.95 paperback, 337 pp.) is essentially a family saga that ends with her family departing to Texas in the 1970s, but it rings true, passing on the stories of ordinary people. The oldest accounts in the book, of Victorian Detroit, are the strangest of all. Could there really have been a time when Corktown residents strolled down the sidewalk at night under the elms, hearing all the families singing Irish anthems around pianos in their homes? It may not be scholarly, but it’s quaint as hell. Be warned: McMahon is no spellbinding storyteller, but there’s a decency and, again, affection for Detroit that permeates the narrative, a charming personal story about a real city with actual people, something much lacking this year.

Best of all was Border Crossings (Ten21 Press, $18 paperback, 260 pp.), and it’s hardly about Detroit at all! It’s the memoir of Charles Novacek, the civil engineer who managed the construction of Cobo Hall, the Silverdome and the Detroit People Mover, among other projects. He died in 2007, and this posthumous release was published by his widow. I’m grateful she did. It’s quite a story. You see, when he was a boy, Novacek’s family was part of the Czech Resistance to the Nazi occupation. Novacek describes his teenage life, writing about stealing weapons from Nazis, hiding the weapons in a cave near his home, even killing a German soldier at long range with a rifle before he could destroy a bridge. If that weren’t a rough enough adolescence, he’s then part of the Czech fight against the Soviet occupation. Finally, there’s his tale of being beaten by government thugs, tossed in a dungeon, and sentenced to be shot at dawn, a story that culminates in a daring and stupefying escape straight out of a slick heist film.

Don’t get me wrong. Novacek’s book is a vernacular memoir, guilty of all the unfair cavils typically directed at that sort of storytelling: its episodic nature, documenting the grand and banal alike, getting ahead of itself, etc. But in the hands of a gifted screenwriter, the story of his life to 21 on the big screen seems more over-the-top than any Tarantino script. And that’s what’s so great about Border Crossings: Novacek’s tale is both incredible and authentic. And he’s one of us.

If only editors would greenlight these sorts of Detroit stories, we might begin to actually understand each other instead of just surveying the wreckage.