The first installment of Manifest Destiny — a new exhibition that opens Saturday curated by Afrofuturist curator (and former Detroit mayoral candidate) Ingrid LaFleur — is a billboard installation by artist Alisha Wormsley that went up earlier this month above Queen's Bar in downtown Detroit. The phrase "THERE ARE BLACK PEOPLE IN THE FUTURE" in white lettering and all caps sits boldly against a black background.

The socio-political art piece received backlash when it was installed in cities like Pittsburgh. Some have gone so far as to call it racist and demanded for the sign to come down.

"That backlash, which seemed absolutely ridiculous, really made me wonder what does that mean for Detroit at this moment," LaFleur says. "It's a very intense moment where there's a wave of new people moving into the city. And as we know, generally speaking, people's relationship with [the] Black body is very unhealthy."

"It comes through the way that people are interacting, and we're seeing those complaints and we're hearing them on Facebook, and social media, and in personal conversations," she says. "It's been going on for years."

LaFleur says the billboard is essentially a reminder to Detroit's Black population that says even amid forces like gentrification that inherently void Black bodies, "this is your space."

These themes continue with LaFleur's art exhibition Manifest Destiny. The curation centers on examining the practical implementation of Afrofuturism "to alter destinies within Detroit and beyond."

Afrofuturism is trending in Detroit and beyond, as proponents of this long-lived cultural manifestation produce events and art exhibitions to "decolonize practices such as radical love, co-creation, and cooperative economics." The art movement, which was coined in the early '90s, explores the themes of the Africa diaspora through science fiction, fantasy, and other forward-looking art forms, perhaps having its biggest moment in mainstream culture with Marvel's Black Panther movie last year. Since she returned to her native Detroit nearly a decade ago following stints in Atlanta and New York City, LaFleur has curated many Afrofuture events around town, including art exhibitions and film series, through her group Afrotopia.

"It's really honoring the legacy of Black-bodied people forging their own destinies regardless of circumstance," says LaFleur. "I want to focus on that part because that part is what brings us into the present."

When curating the exhibition, LaFleur says she thought about what it takes to manifest our destinies. Sitting with this question for a while produced a three-part answer that can be seen throughout Manifest Destiny. 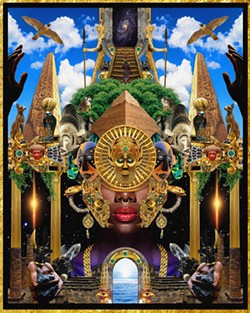 The next step in the process is that it must be "heart-led."

"If we're not intersectional in the way we are approaching a thing to manifest that thing, we will create harm," LaFleur says. "That's something I would like to avoid."

The last step is assessing the tools needed to manifest the aforementioned futuristic destiny. LaFleur says this is where the programming in Manifest Destiny comes into play, with a number of events held at the nearby space at 1301 Broadway St. That includes an event by Rasheedah Phillips at 4 p.m. on Saturday. Aug. 3 titled "Quantum Womanist Futures, Black Space Agency + Communal Temporalities," which explores "time, parallel time, and how past, present, and future collapse onto each other."

"This is all about decentralizing production so that people have control over what they can and cannot produce," LaFleur says. "I think that's really important because 3-D printing is an emerging technology to help us produce and can help sustain Black realities, I really like that. Also, anyone can build a 3-D printer, and have it in their home to create whatever they want."
There will also be a workshop from the Black School at 2 p.m. on Sunday, Aug. 11 that will be "exploring the future of Black space." LaFleur will also contribute her own work to Manifest Destiny that centers on blockchain technology and how it can be a tool that marginalized communities can use to explore new economies, with an event at 6 p.m. on Thursday, Aug. 15. She poses the questions: What are the economies that we need to be creating in our communities? What does imagining a perfect economy look like? And how can we make this happen? LaFleur believes blockchain technology is one pathway of many to make a new equitable economy.

An Afro-Sonic Mapping series will also be available by Satch Hoyt, specifically looking at sound and "how it moves and changes and shifts through time and geography."

"Most people know about Sun Ra before they know about Octavia Butler," says LaFleur. "So just understanding where that comes from a long beautiful history where sound develops and transforms into an Afrofuturist sound."

Another aspect of the exhibition is DINKINESH, a boutique LaFleur commissioned artist Ut Petit to design.

"With DINKINESH I want to bring the digital into physical reality," LaFleur says. "The store is supposed to [be] an Afrofuturist experience."

She says when Black Panther came out, people were really excited about Afrofuturism and would ask: What books should they buy? What movies should they watch?

This led her to co-create a space where all of these things can be purchased. "I am hoping that I can bring more visibility to the artists that are creating these objects," LaFleur says. "It's more affordable than the art I curate."

DINKINESH ("You are wonderful" in Amharic) derives from the name given to one of the oldest pre-human remains found so far, a 3.2 million-year-old female skeleton fossil discovered in Ethiopia. LaFleur says it reminds us that all humans come from what is now Africa, and we are all bonded by that in blood.

LaFleur says that through her work she wants to help co-create a future one day where she doesn't have to put up a billboard to remind people that Black people are in the future. Until then, she's working diligently, intentionally, and purposefully to cultivate spaces with a "for us, by us" mentality, to provide room for all intersectionalities of Blackness to exist without harm or prejudice.

"I really don't want to turn people off," says LaFleur. "I want them to open up and listen and shift and change. Because we don't really want in the future to be having these conversations."

Manifest Destiny opens with an artist reception from 6-8 p.m. on Saturday, July 20 at Library Street Collective; 1260 Library St., Detroit; 313-600-7443; lscgallery.com. There will be musical performances by Bryce Detroit, Kesswa, and Tunde Olaniran in the Belt Alley outside. Immediately after will be an after-party at Deluxx Fluxx with Bevlove, Sir Bleek, DJBJ3525, Jay Daniel, Problematic Black Hottie, and Supercoolwicked; 1274 Library St., Detroit; 313-788-7015; deluxxfluxx.com. Tickets to the afterparty are $5 after 10 p.m. (21+ only).