After a post-Trump hiatus, Charlie LeDuff is back with a new book 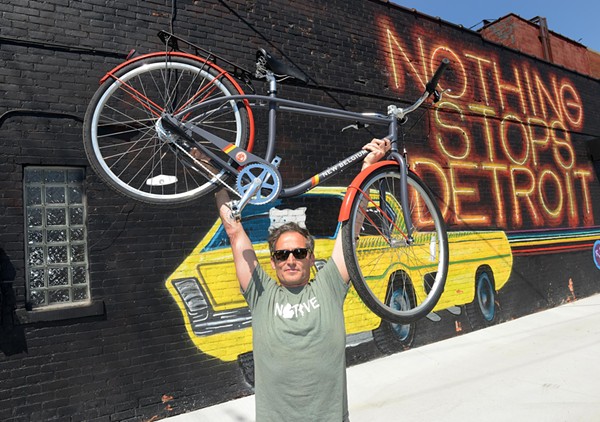 When we heard that the Pulitzer Prize-winning journalist Charlie LeDuff was working at American Coney Island, we figured that meant he was hawking weiners as a celebrity guest or something. We didn't think that meant, you know, actually working at American Coney Island. Yet according to a recent viral profile in the national outlet The Weekly Standard, for the past year and a half or so LeDuff has been doing just that — deep-cleaning the restaurant's grease fryers and shooing the Pigeon Lady out of the bathroom.

When we ask him if he's not surprised the local media failed to pursue a story lead, LeDuff shrugs it off. "Well, no. I mean, I don't think it's a story," he says by phone. "To each his own. I mean, a guy's working."

What we did know is that shortly after Donald Trump's surprise upset in the 2016 presidential election, LeDuff abruptly quit his gig as the star of Fox's nationally syndicated show, The Americans. And for a while, it seemed the journalist who appeared to love to make himself the story (see our 2015 Metro Times cover story profile on LeDuff) was laying low. Sure, we read the occasional story he filed in the meantime for Deadline Detroit or The Detroit Free Press. But as it turns out, LeDuff has been working on a new book, his fourth: Sh*t Show! The Country's Collapsing... and the Ratings are Great, which was released May 22.

Then there's the time LeDuff kayaked across the Mexican border alongside Jet Ski-riding migrants while wearing an American flag Speedo. Or that time LeDuff and his crew accidentally livestreamed themselves on Facebook bickering amid the chaos of the Ferguson riots. Or when LeDuff road-tripped with a Ku Klux Klan Grand Dragon, or the limp, pre-Trump political platitudes uttered by Ted Cruz to LeDuff during an encounter during a press event in 2015 in Iowa.

In hindsight, looking back at the stories LeDuff filed for The Americans and recounted here in this book, one gets the clear impression that there is something deeply wrong with the fabric of the country — that the American Dream is dead or dying, that the writing has been on the walls for some time now, and the election of Trump in 2016 was inevitable.

"Is it an overstatement that we're living in the time of Louis the XVIs?" LeDuff says. "Wages haven't gotten better. Wealth is out of whack. Income is out of whack. Stuff's not coming back. Instead, we get tax cuts and stripper shows. Hey, when people say, 'Stick a finger in the eye of the establishment,' I get it. Is it getting us anywhere? I don't know. I doubt it. But I get it."

A shit show, indeed. But like LeDuff's title suggests, the media is an implicit part of the act. Perhaps even more than showing the inevitable path to the rise of Trump, the book offers readers another inevitability: LeDuff would want to take a break from all the madness and do some soul-searching.

LeDuff admits he needed to take time off from TV, to "just take a step back instead of filing, and filing, and filing," he says. But he also points out that he has done this before in his career. His previous books, he points out, came after his stints at The New York Times and The Detroit News. "No, I have not 'gone away,'" he says. "'Where'd you go?' Nowhere! You know what I mean? This is my fourth book. I've been in the business 20 years. This is not new. I'm always reassessing myself."

For now, LeDuff seems excited to be out of his self-imposed exile and doing a book tour. He says he looks forward to taking his daughter fishing when he returns, and maybe heading back to work at the coney. Beyond that, though, who knows.

At the very least, it appears that after his hiatus, LeDuff is energized about journalism again. He says last night, he watched The Post. A quote stuck with him: The job of the press is to work for "the governed, not the governors."

"I believe that to my core," he says. "I get accused of not being mature, but I am."