He’s been a congressman since ’65. Challenger Bert Johnson says his district needs a change 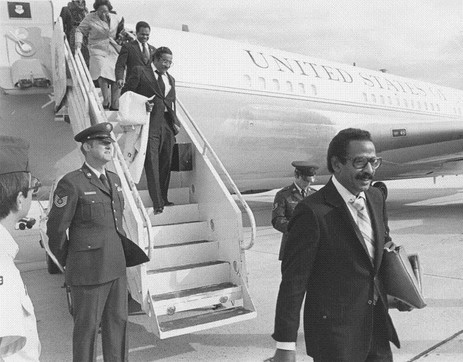 The first time John Conyers was elected to Congress, Bert Johnson's parents weren't even teenagers. The last time Conyers had a serious challenger, Johnson was a kid doing hard time in prison.

But that was 1994 and this is now, and Bert Johnson is a different man, a serious and thoughtful state senator who says he tries to use the mistakes of his past to help people in the present.

And next year, he intends to take on John Conyers in the Democratic primary for Congress in the newly configured 13th District, which includes a little more than half of Detroit and a collection of mostly blue-collar Wayne County suburbs.

Conyers is bound to be heavily favored, even though Johnson actually lives in the district, and Conyers does not, at least not yet.

But the longest-serving African-American congressman in history could be vulnerable. For example, last month, the Arab American National Museum in Dearborn held an all-day event looking at the long-term impact of 9/11 on their community.

Late in the day, U.S. Rep. John Conyers came in to the final session and sat down in the audience. Eventually, the moderator (OK, it was me) asked if he'd like to come up and say a few words.

The congressman came to the podium, and told the mystified attendees that the Arab-American community ought to learn to appreciate the genius of John Coltrane and Miles Davis, which was about as relevant to that day's discussion as Spiderman.

Conyers also suggested to his largely bewildered audience that they get bus tickets and come to Washington to help celebrate the anniversary of the Congressional Black Caucus. For those who have known the congressman in recent years, this was not especially surprising behavior, though the media mostly ignores it.

John Conyers has been marching to his own drummer for a long time. He's the second longest-serving current member of Congress, and will be 83 years old before the next election. Nobody questions his commitment to peace and justice.

His competence is another matter.

The congressman had been in Washington nearly a decade when a baby named Bert Johnson was born to an upwardly mobile family in Detroit. His father, also Bert, eventually became a lawyer with his own firm. His son had everything going for him, except one.

"I was a follower," he said, and followed the wrong people. That led to an armed robbery conviction, and hard time in prison.

But he turned his life around, big-time. Today, he is a newly elected state senator, the father of three, respected in his community. State Sen. Bert Johnson (D-Highland Park) doesn't make any excuses for what he did all those years ago.

"I did a stupid thing, but I had an excellent judge," he told me over breakfast in Highland Park last weekend. (Jessica Cooper, now the Oakland County prosecutor.)

"She told me she was giving me a chance, and it was up to me to take it." Johnson was given an open-ended sentence: 18 months to 30 years, depending. He got the point. He stayed to himself and read constantly in the joint — Ionia, one of Michigan's toughest prisons.

He was determined not to screw up again. Johnson was out in a little over a year, and went back to school at the University of Detroit-Mercy. His father put him to work in his law office, managing cases, maintaining files; he found he had a gift for organization.

When his friend Bill McConico was elected state representative, Bert went to work in his office, setting up events. "He turned me loose in the community, and I found I really liked the people part of politics, not the partisan game — working with people, helping them."

Soon, he was McConico's chief of staff. When term limits meant his boss' time was up in 2006, Bert Johnson ran for and won the seat. Last fall, the state senate seat came open, and he won that too.

Though he doesn't complain, being in the state Senate has to be frustrating. Democrats have only a dozen members, less than a third of the total, and can't even temporarily delay whatever Republicans want to do. That's unlikely to change soon.

Bert Johnson looked out at the poverty and joblessness and despair and decided he needed to do something. Then, when the new district boundaries were revealed, he decided Congress was it.

Being a gentleman, he decided to tell Conyers that he had decided to run. They met at the Cornerstone Bistro in Highland Park, where, Johnson said, Conyers oddly offered to help and mentor him.

The state senator pauses, over breakfast in the same restaurant. "This race is not about John Conyers," he says. That may be true, in the sense that he doesn't intend to make the congressman the issue.

But of course it is about him. Conyers, Johnson notes, has been known to call himself the "congressman from the planet Earth."

Johnson, who is 44 years Conyers' junior, thinks the congressman's telescope needs a narrower focus. "If you look around this area, you have to ask if the district's needs are being met by Washington. And the answer is no."

The 13th is, indeed, one of the poorest urban districts in America, especially the Detroit and Highland Park sections.

If anything, the new district may be a little less poor now than it was, thanks to the addition of some working-class suburbs, including Garden City and Romulus, Westland and part of Dearborn Heights.

But there is not much money here and a whole lot of need. Bert Johnson says he is raising cash, and his "Cadillac dream" would be a budget of $700,000 to try to knock off Conyers. He knows that winning will be anything but easy. Melvin "Butch" Hollowell tried back in 1994, after the congressman was seen frantically waving at cars from the median strip on Livernois one morning, barefoot in the wee hours.

For a while, it looked like Butch had a shot. But then Conyers, or his staff, expertly manipulated the late Marie Farrell-Donaldson into the race to split the opposition vote, and that was that.

Something like that could happen again ... but times are a-changing. Bert Johnson, born in 1973, is a man of another generation who is less interested in posturing than how to prevent mortgage foreclosures; less interested in making statements than working out compromises to try to get something done for his district.

After our breakfast, he left to spend the rest of the day with his son (also Bert, of course), who just turned 13; and the deal was that Dad would be at the service of little Bertram and his buddies, starting with a movie. ("I don't get to pick," Dad said.)

"I don't think a life of public service means you don't give your kids attention." He thinks the 706,000 people in his district also deserve more attention, and intends to try and get it for them.

That is, if he can get their attention and votes next summer.

It will be interesting to see how this race plays out.