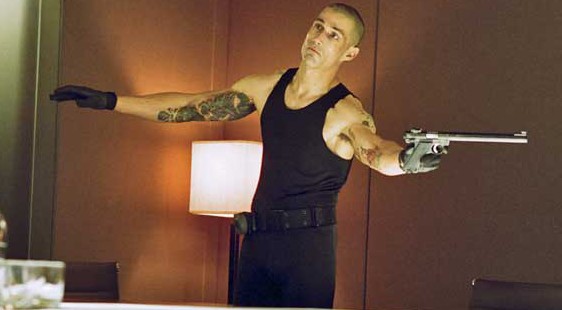 Tyler Perry and James Patterson have built vast fortunes by crafting commercial products that can be charitably called "undemanding" of their respective audiences — but when these two titans of schlock join forces, the result is even more stunningly awful than we might have imagined. Crime novelist Patterson has become the king of the airport paperback spinner rack by casting a wide net, while Perry has narrowcasted to a very specific audience, one that doesn't include a whole lot of young men. In a bid to shake up his soft-lit, sweater-wearing image, Perry has ditched Madea's flowered housecoat and wig in favor of a badge, a trench coat and a sawed-off shotgun to star as police forensic psychologist Alex Cross, a role previously played by Morgan Freeman.

Perry is famous for working in drag, but he does his level best here to appear butch, growling his generic tough guy dialogue with an earthshaking rumble, and casting steely glares that would make a stone gargoyle blink. With his bulky frame, Perry does strike an imposing figure, though the only crunches he appears to do are when he bends down for another slice of sweet potato pie.

In contrast to Tyler's girth, his primary opponent is played by Matthew Fox (Lost), who has drastically slimmed down and toned up to play a sadistic killer the cops dub "Picasso," as he likes to leave charcoal etchings near his victims. Fox seems to be trying to borrow from the Christian Bale stylebook, given the ripped physique and the bugged-out intensity he gives to every line reading.

Detroit detective Cross is prepping for a move to the FBI, but first he must stop this ruthless madman. And when one of Cross' loved ones ends up in Picasso's gun sights, things turn very, very personal.

The by-the-numbers procedural shenanigans are all just perfunctory busy work, until Perry goes into full-on vigilante mode, tampering with evidence, smashing down doors and slapping around stoolies and basically endangering anyone that gets in his way.

Miscast as he is, Perry tries his best to do the job, though he's been handed a script that's best use would be propping up the end of a wobbly table. No matter how skilled the actor, it's tough to be taken seriously when spitting out such generic macho speak as "I'll hunt you down to the gates of hell!" The cheesy script is jam-packed with such groaners, and is loaded with bland stock characters, including a lame Edward Burns as Cross' partner-best friend, who somehow managed to develop a Queens accent while growing up in Detroit. Jean Reno saunters in for a few minutes as the secret big baddie pulling the strings, and at least he seems to be mildly embarrassed.

What really makes Alex Cross the year's most giggleworthy thriller is the indifferent direction by Rob Cohen (The Fast and the Furious), who seems to be taking a catnap between action beats.

Even the fight senses are incompetent; the big climactic set piece involves an explosion that is below the sub-standards of even a Saturday night Syfy Channel production.

Women are disposable in Alex Cross, literally, and there is a weird undercurrent of sexist hostility running through the film. Having made a fortune extolling the virtues of strong black grandmothers, Perry seems to relish the scene where he gruffly tells his mama (Cicely Tyson trying to keep it classy) to get the hell out of the way. Madea wouldn't stand for such nonsense. Neither should we.