Consider the advantages of going Dutch 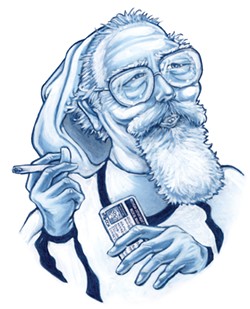 As a prominent European port city, Amsterdam has served as a center for lightweight vice — recreational drug use, prostitution, gambling, public sexual excess — for several centuries.

This sort of activity has been tolerated in Amsterdam since the city's beginnings, exemplified in modern times by fully legalized prostitution and the virtual legalization of small-scale marijuana sales and recreational drug use of all sorts.

But in no way is Amsterdam a wide-open city in any sense of the word. Vice is regarded as simply a part of normal life and, in the Dutch way, sensibly tolerated and regulated to fit proportionately into the everyday life of its 600,000 citizens. Cannabis use has stabilized at something like 20 percent of the populace and presents no sort of threat to the rather staid social order.

Nothing is more boring to Dutch citizens than the topic of marijuana use. There are those who oppose it on the usual religious or cultural grounds, but the sensationalism and public drama of American-style War on Drugs propaganda is nowhere in evidence; the forces of law and order are perfectly happy with the way things work in terms of recreational drug use.

It's important to remember that marijuana is not exactly legal in the Netherlands. Marijuana use and procurement exist in what the Dutch describe as a "gray area" where it's OK to buy some weed and smoke it in the hundreds of licensed "coffee shops" that abound in the Netherlands, with nearly 250 in operation in Amsterdam itself.

But it's illegal to cultivate, grow, harvest, import, transport or deliver cannabis to the outlets where it's sold across the counter to anyone over 18 who can meet the modest price of purchase. An individual may grow five plants for personal use, but larger grow operations intended to supply the coffee shop market with salable product are targeted for arrest and prosecution by the police and courts.

The marijuana smoker is allowed by national governmental policy to enjoy possession of five grams and the ability to purchase them over the counter in the coffee shops, which are themselves permitted to possess no more than 500 grams of marijuana and hashish on their premises at any one time.

Holland has legalized medical marijuana, available at pharmacies with a doctor's prescription, but word on the street is that the medicinal weed isn't as good as that available commercially and even costs somewhat more than the over-the-counter brands.

For centuries, weed itself was scarce in Holland, and hashish mixed with tobacco into joints ("jointjes") was the traditional smoke. But in modern times, the Dutch have learned from the holy farmers of Hawaii and the West Coast how to cultivate vast quantities of top-quality marijuana and make it available to the retail counters in the coffee shops.

Now there are almost countless strains of marijuana — cannabis indica, cannabis sativa and blends of the two basic types — offered to the consumer by means of explicit menus provided at the point of purchase. Standard brands like White Widow, Blueberry, Skunk and Power Plant are always in the house, along with more exotic strains like Super Silver Haze, Amnesia Haze, New York Diesel, various breeds of Kush and Cheese, and whatever hybrid delicacies the growers manage to dream up and cultivate from season to season.

Some coffee shops (such as the 420 Café, the author's favorite hang) offer limited menus with maybe six marijuana and six hashish selections. Others have strains specially grown for them, or specialize in voluminous listings of 20 or 30 types of smoke always kept on hand. Some weigh out your grams and bag them before your eyes, while others sell pre-prepared gram bags.

Unlike our own measures in terms of ounces, quarters, eighths and sixteenths, the Dutch use the metric system, and cannabis is sold strictly by the gram. For the causal smoker of limited financial power, this means that you can cop by the $8-$10 gram and rest assured that there'll be another gram of the same sort and quality available in the same location when you need it next — no pressure to round up $60 or $80 in order to enjoy your smoke.

The great thing is that there's no stigma attached to getting high or enjoying a smoke in a public setting, although the Dutch much prefer that such use is kept indoors and confined to like-minded sorts. Smoking cannabis is de riguer in the coffee shops, and there are many smoker-sympathetic bars that allow the simultaneous ingestion of cannabis and alcoholic spirits.

Until a few years ago, the coffee shops were allowed to serve both smoke and drink, but such mixing is no longer permitted, and the bars that allow smoking don't sell the stuff on the premises. And since the European Union enacted anti-tobacco legislation that forbids smoking cigarettes in coffee shops, restaurants and bars anywhere, only cannabis smoking is permitted in properly licensed establishments.

Coffee shop culture is a topic in and of itself, but a brief historical survey reveals that the coffee shops resulted from the growth of public smoking and cannabis provision that started in squatted entertainment venues like the Paradiso and the Melkweg around 1972.

At the same time, enterprising individuals of the burgeoning cannabis culture determined to make the stuff available in fixed locations, such as the houseboat that originally offered hash and weed for sale, and seminal coffee shops such as the Rusland and Mellow Yellow.

By this time, the effects of the Netherlands becoming a signatory to the Single Drug Convention propagated by the hated Richard M. Nixon administration should have squelched the incipient movement for legalization of cannabis in Holland, but a sort of miracle happened. The son of a prominent Dutch cabinet member convinced his mother that there was little personal or social harm that could reasonably be blamed on cannabis use, and the government should seek to reduce and limit the potential harm to the smoker from the legal system.

An improvised "harm reduction" regime was soon established that allowed the cannabis outlets and public smoking spots to exist without punishment while continuing to forbid the cultivation and delivery of cannabis in the Netherlands. Recreational use of reasonable amounts of hitherto forbidden substances of whatever sort would be permitted without resort to either persecution or prosecution, and things bubbled along pretty much without incident for more than 20 years before the regulation era began in 1995.

At that point, the government decided it had to have some of the action from the ever-growing cannabis industry and insisted that all existing coffee shops and dispensaries of any sort must be registered and licensed by the city in which they existed. The proceeds from their product sales would be taxed and their activities regulated according to the whim of local government.

So the present system has been in effect now for 15 years, and while the local authorities continue to chip away at the coffee shop culture in petty little ways too trivial to enumerate here, Amsterdam and Holland still manage to maintain the most rational and least punitive environment for recreational marijuana use in the known world.

In this time of turmoil and massive change in America's approach to marijuana use and distribution, we have an awful lot to learn from the Dutch system and how it accommodates the vipers among its populace. For now, Amsterdam remains Viper Central, and long may its freak flag wave!

Now based in Amsterdam, longtime multi-cause activist and writer John Sinclair contributes to the bi-weekly Higher Ground column in Metro Times. His musings and musical selections can be heard at RadioFreeAmsterdam.com.