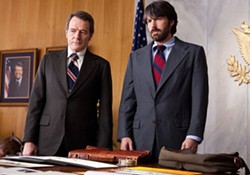 Ben Affleck sure loves movies from the 1970s. Right from Argo's opening moments, which feature Warner Brothers' now-discarded Saul Bass logo, it's clear that the actor-turned-director has a passion for what films used to be and how they were made. From its ominous, crackerjack pacing to a sharply observed second-act Hollywood satire to the Warren Beatty-style beard that gives Affleck surprising gravity as an actor, there's both a sense of cinematic purpose and wistful nostalgia about the way he's conceived Argo.

The movie opens with a newsreel-style history lesson about Iran's overthrow of the Shah and the religious revolution that followed. Affleck is slyly critical here, making clear how America's exploits in the Middle East directly lead to the 1979 embassy takeover, and much of the political turmoil that continues to this day. But this is no Syriana. Affleck is ever mindful that his thriller was built for entertainment, not polemics. So we're quickly thrown into the terrifying moments before the U.S. embassy is taken over by angry Iranians. Trapped visitors and staff watch in horror as the gates come down and the embassy's small security force surrenders to the crowd of militants. Room by room, the building is overrun with rage-fueled protesters, as government officials desperately attempt to shred and burn important documents. It's a stunningly tense bit of film work, brilliantly capturing the time, place, and panic of an impossible situation. Fifty-two Americans are, of course, taken hostage. But six sneak out, taking refuge, first at the Canadian embassy, and then at Canadian Ambassador Ken Taylor's home.

This is where Argo's now-declassified story kicks in (Clinton released the files in 1997). CIA agent Tony Mendez (Affleck) is tasked with rescuing the sextet before the Iranians find and publicly execute them. Unfortunately, almost every rescue mission concocted by the intelligence community seems destined to fail. From teacher credentials that won't pass muster to an absurd plan involving bicycles, Mendez struggles to find "the best bad idea." It comes from a chance TV viewing of Battle For The Planet Of the Apes. Recruiting Hollywood producer Lester Siegel (Alan Arkin) and Apes makeup artist John Chambers (John Goodman), Mendez schemes to set up a fake movie production, enter Iran as location scouts, and then smuggle the six Americans out as members of a Canadian film crew. But, to convince Iranian officials, his cover story must appear real. With that in mind, Siegel and Chambers announce the development of Argo, a Star Wars-knock off that's given the full Hollywood treatment.

It's here that Affleck's movie shifts gears from tense docu-thriller to showbiz satire as his gruff agent takes studio meetings, cruises L.A. in a gold Cadillac, and even stages a live reading of the Argo script, complete with blinking robot costumes. Arkin and Goodman trade hilarious barbs about their industry and for a little while the movie feels like a comic caper flick ... until images of anti-American militants are juxtaposed against the decadence of the Hollywood soirees. Affleck, always in control, never lets the plight of the six Americans slip from sight. For as lunatic as Mendez's plan may be, it's a gambit fraught with cinematic possibility — one made all the more amazing because it's true.

Returning to Iran, Argo falls into the real-time rhythms of a race-against-time thriller as the six Americans must convincingly play people they are not. Dramatically, it's pretty conventional stuff. but Affleck is a pro, skillfully ratcheting up the suspense while lacing in sharply observed details. He makes terrific use of his Moroccan locations, capturing what must have been Tehran's near-constant atmosphere of volatility and claustrophobic danger.

If there's a shortcoming, it's in the anonymous nature of the six Americans Mendez must rescue. As a group they're a pretty boring bunch — especially when you consider the colorful exuberance of Arkin and Goodman's characters. The script gives the six little to say or do, mostly defining them by the level of reticence they feel about Mendez's plan. Their dialogue underlines that sentiment ad nauseum ... when it isn't dominated by complaints about how much it sucks to be shut in. None of the group is particularly relatable, even though the most contrarian of them plays a pivotal role in the final escape. It's an unfortunate misstep in an otherwise sure-footed film.

But beyond Argo's prestige package of entertainment (the terrific supporting cast includes Bryan Cranston, Victor Garber and Kyle Chandler), Affleck impresses with the thematic sophistication of his vision. He is a man who truly believes in the redemptive powers of cinema. Whether it's the sci-fi flick that inspires Mendez's plan, the way he watches movies over the phone with his estranged son, the need for the imperiled six to adopt film personas, or the storyboards that are used to connect with some Iranian guards, Argo is a love letter to the unique way movies can bridge cultural and generational gaps, and forge a common emotional experience.

The only question is whether Affleck believes movies still hold that power today. An early lingering shot of the famous Hollywood sign, fallen into disrepair, could be viewed by some as merely authentic to period. Still, one has to wonder if the actor-filmmaker isn't commenting on an industry that all too rarely makes films like Argo anymore.