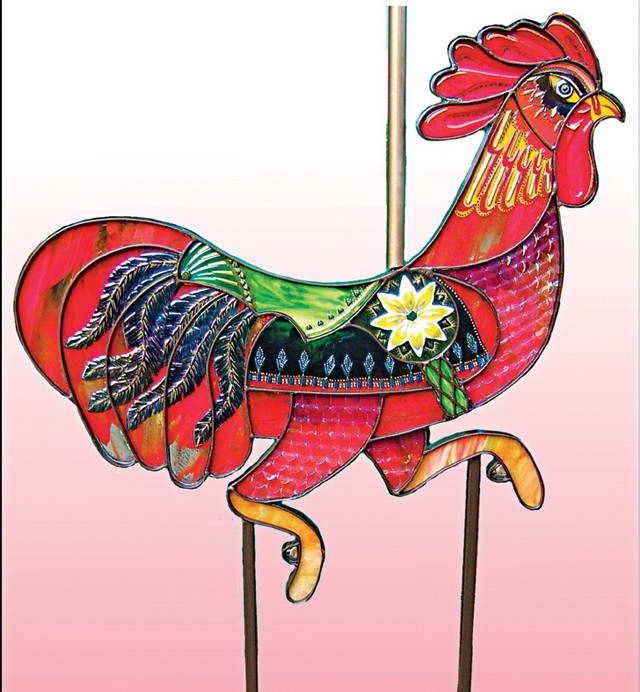 What: International art contest giving away $560,000 in total prizes.

Where: Forty locations throughout Grand Rapids

Many entrants in the Grand Rapids art contest, ArtPrize, are from the Lake Michigan coast. But since its inception in 2009 the contest has acquired attention and entrants from all over the world, including Detroit. ArtPrize now boasts to be the world's largest art competition with more than 1,500 entries in six categories and about 90 artists from the Detroit side of the mitten.

ArtPrize was founded on a democratized philosophy of art (think American Idol: Art Edition). The organizers believed that the competition should not only be open to anyone, but judged by anyone. Artists and Grand Rapids venues register on the ArtPrize website and independently organize themselves. This means that the city is invaded by art of all forms, with events scheduled from Sept. 19 to Oct. 7. The first leg of voting narrows the art down to the Top Ten entries; starting Sept. 30, the public has five days to cast votes for the winner. First place winner of the public vote receives an astounding $200,000.

However, this year is different. The organizers are now adding a top juried prize of $100,000 plus $20,000 awards in five categories. This seems to veer away from the contest's original intention of doing away with the traditional "top-down" idea of art. But as second-time entrant Joe Rutherford points out, "it will spread the prizes around and give everyone more of a chance to win." Adding to the excitement is the prospect of the juries agreeing with the public, making it possible that one starving artist could receive more than $300,000. That can buy a whole lot of Ramen noodles.

Though this year brings hundreds of new artists, many have competed in previous years' contests as well, including Royal Oak native Daniel Cascardo and Plymouth residents Joe and Jennifer Rutherford. The Rutherfords began by painting murals and now also create jewelry and sculpture out of fused metal and glass. This year, they are entering a 10-foot tall 3-D carousel, a project they started constructing in May. Daniel Cascardo is entering a colossal colorful fishing lure constructed out of reclaimed materials.

At ArtPrize, bigger seems to be better; last year's contest drew more than 300,000 visitors to the city, and Cascardo noticed that they seemed attracted to gigantic pieces. The winner, Mia Tavonatti, won the top prize with a 13-foot-tall rendering of Jesus on the crucifix out of stained glass pieces. The piece raised some controversy over artists supposedly pandering for local votes on the more religious side of the state. Another example: One artist created a wax and bronze statue of Gerald R. Ford, who grew up in western Michigan. But Cascardo believes the prize went to Tavonatti because of the scale and intricacy of her work, not the subject matter. As far as the Rutherfords are concerned, "some artists do pander, some people completely ignore it and just do what they're doing." But every artist tries to connect with audiences on some level. For the Rutherfords, it is the nostalgic past of carnivals; for Daniel Cascardo, it's his love of Michigan and the Great Lakes.

For artists everywhere, a $200,000 prize would be life-changing, but the artists aren't just there for the money. The contest is about bringing art to the public consciousness and incorporating it into the community. ArtPrize makes art and artists important. It's an extensive display of the artistic talent Michigan has to offer in one of our most beautiful cities — and definitely makes for an interesting road trip. —Emily Riopelle