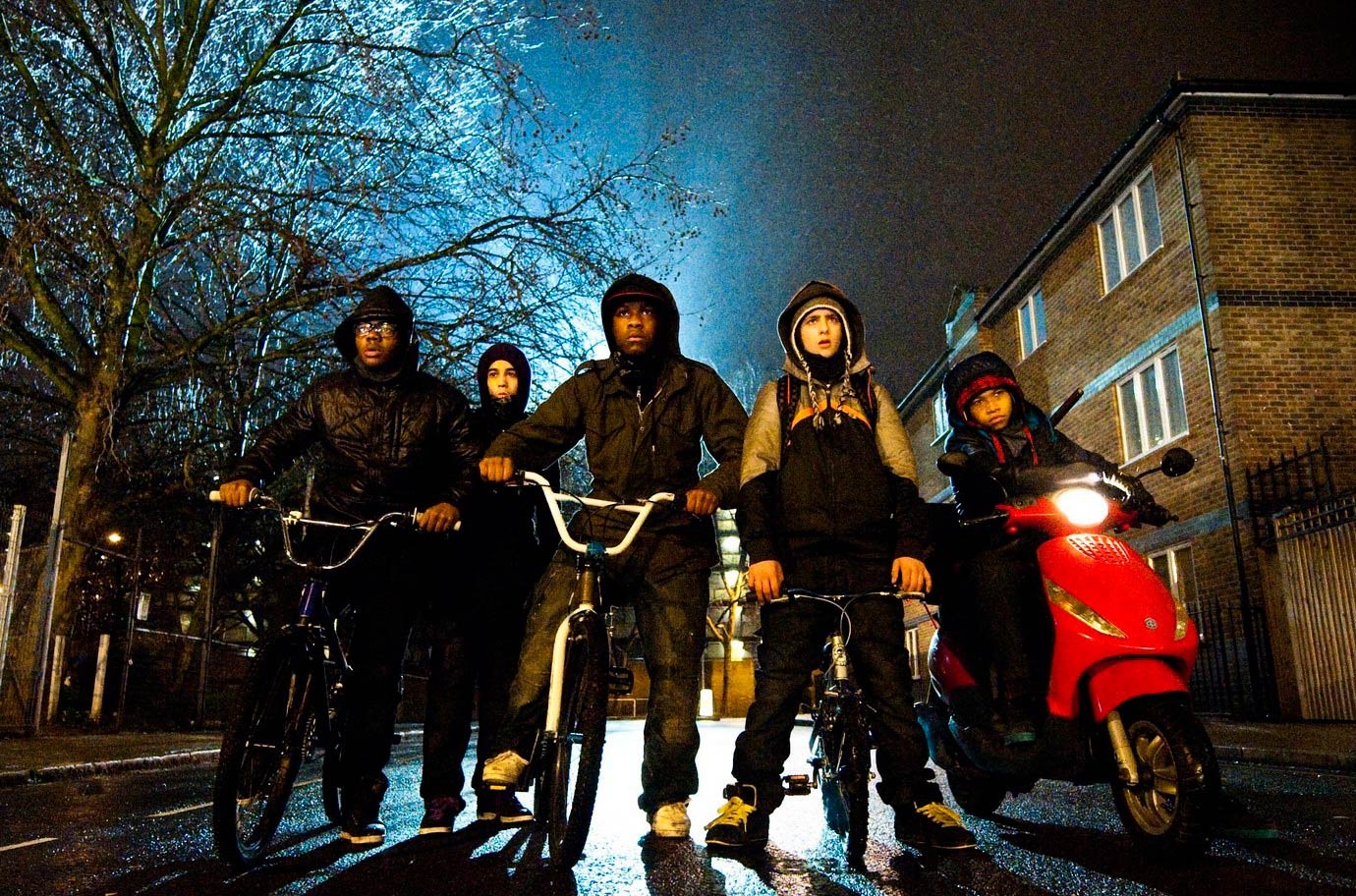 Like Coca Cola, extraterrestrial assaults go with everything in film; from space invaders to coming-of-age nostalgia to immigration policy debates to rah-rah jingoism, and in this case, the boiling over of multiethnic tensions in the U.K. Basically this flick could be titled Gangs vs. Aliens, though these energetic street thugs yield somewhat more amusing results than the expensive cowboys did earlier this summer. Exuberant, sly and charged with unexpected political sting, Attack the Block makes the most of a low budget, a haphazard sense of plotting, and a deceptively simple premise.

"The block" is a decaying concrete tenement tower in a dodgy corner of south London, populated by an assortment of working-class stiffs and oddballs, and menaced by a crew of hip hop-loving teen hooligans. Their leader is the surly but charismatic Moses (John Boyega), whose sensitive intelligence lingers beneath macho posturing and hormonal rages. We meet them as they're mugging local nurse Sam (Jodie Whittaker), but she's saved when a snarling, otherworldy monster drops from the sky. Such audacity finds the lads chasing the critter into a nearby shed and unloading a can of whoop-ass with improvised weapons and basic shoe leather. Turns out there are more (and nastier) creatures where that one came from, and the neighborhood is soon overrun. With their shaggy black fur and eyeless faces, loaded with menacing rows of neon teeth, they look like moving street art, like an animated Banksy piece bound for vengeance.

Ashamed of robbing the neighbor, and in need of triage, the boys team up with Sam and with a pudgy pot dealer, played by the only familiar face in the movie — the avuncular fanboy favorite Nick Frost (Hot Fuzz).

Scary as the aliens are, the more immediate threat comes from the hideous Jamaican- Creole-Brit slang the kids babble on in — makes them sound somewhere between reggae DJs and Sacha Baron Cohen's Ali G. They call each other "Fam" and "Bruv" and the police are "the feds" and Moses barks orders with the catchall "Allow it." This linguistic junk falls so harshly on the ear that you'll long for some of old-fashioned, H-dropping, Michael Caine cockney.

Beyond the barely decipherable accents there's a fairly witty script, one better with humor than politics. See, this is a metaphor for understanding and collaborative effort, as Moses and company slowly begin to question the wages of violence; all while giddily stomping the holy shit out of an unknown foreign species.

Director Joe Cornish is deft with comedy and suspense, and has buckets of style, though sometimes his action scenes are as unfocused as the social commentary. It's a challenge making heroes out of thugs, but the picture makes us care about hoodlums even if they aren't quite totally reformed by the experience. In light of the recent English riots, it's curious to have such a silly genre exercise serve as the accidental voice of the angry, voiceless youth.

Still, when it clicks, Attack the Block is a hell of a good time. Expect the American remake, set in South Central or Cabrini Green, to be announced any minute.