So let's get this party started 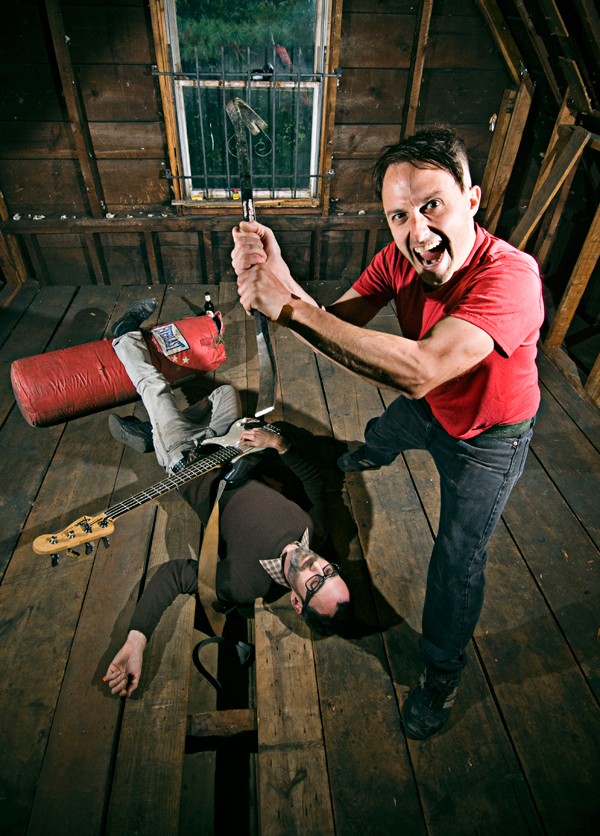 Taking the stage at PJ's Lager House for his band's sound check, Bad Party frontman Nate Savino fixes the small, alcohol-warmed crowd a sly sneer. "Anyone got some cocaine?" His bandmate and bassist Mike Kearns smirks. The crowd begins to get playfully antagonistic, some yelling silly requests to which Savino affectionately replies, "Fuck off." The two-piece is opening for fellow Detroit noise duo, Darkred, who are there pimping the release of their new single.

Bad Party doesn't seem like much. Savino is a small Italian dude decked out in an unassuming red shirt and khakis while Kearns looks, um, rather hipster-y.

The soundcheck is hasty, considering there are only two "instruments" to be leveled — Kearns' bass and Savino's distorted drum machine — but that's all the duo needs. Absolutely.

The band begins with an eardrum-drilling symphony of feedback. Savino mashes his drum machine until it produces some foot-stomping, house music-like beat, then cradles his microphone and the "band" launches into "Not That Kind of Girl," a beautifully raunchy head-banger.

Savino lurches around the stage yelping and convulsing while Kearns rips out minimal but effective bass lines slapped with a hair-raising coat of fuzz. Each song lifts from that formula; Savino supplies a drum-machine beat, Kearns lays down a fuzzy bass line. It's messy, dirty, grimy and absurd, at times avant-garde dance, other times dank post-punk. It's also cerebral in its simplicity — it takes some understanding and thought to go minimalist. And you can dance to it. You wouldn't find yourself slipping their CD into rotation at some frat party. But you would at, um, a bad party.

Corktown-based Bad Party has been compared to the electronic post-punk of Suicide as well as Steve Albini's '80s noise-blast project Big Black. Such comparisons do little to inspire the band. In fact, there's no readily apparent comparison to be made, which is strange in a post post-modern era of cut-up music.

"I think people are at a loss for how to describe it," Savino says. "People like having something that's safe. People will say, 'Man, you sound like this or that.' I don't think of it like that at all. I mean, I listen to a lot of classical music. My taste doesn't make sense to what to what the band sounds like. I like Bon Scott-era AC/DC, so I guess you could call that an influence. But, it's not like I want to sound like that."

It's no surprise then that Savino isn't fond of being measured against other bands. "I didn't write that crap that's on my MySpace about sounding like Big Black," he says. "And I'm not into that; I think Steve Albini is a dork and a virgin or something. I don't like being compared. I mean, no one describes Big Black as sounding like ... whoever."

Savino says much of Bad Party is birthed from sounds rattling around inside his skull. "A lot of it is just the noises I hear in my head," he says. "So, I'll hear stuff in my head, like the devil popping in your head or something like that. I always say that there are little demons in my amps and they're following me around, like I'm cursed."

Savino, 37, and Kearns, 40, have been hopping around from band to band for the better part of 15 years. They met through mutual friends. Savino insists that he's old, but, hey, he doesn't look a day over 27. "I get that stigma of, 'Oh, you shouldn't be rocking past 30,'" he says. "I'm still young in my head. I'm like Peter Pan."

The Lager House show was in front a pretty dull crowd, as if people weren't exactly sure how to respond to the bands. But when confronted with waves of feedback and then fist-pumping drum-machine beats, it fucks you up.

Savino says, "Somebody asked me what it sounded like one time and I said it'd be like if you were walking up the street and someone just came and started beating you in the face and just walked away and you're left wondering to yourself, 'What the fuck just happened?!'"

Before Bad Party, Savino founded another minimalistic act with a punk rock vibe back in 2001 called White Devil. But what's in a name? "Everybody always used to think it was something racist," he says. "I used to have another band called Wiscum that me and Mike were in, and it meant 'White Devil' in Cherokee. I'm a little bit Cherokee on my mom's side. So, it was this word that meant 'the people who came and stole their land,'" he says with a laugh.

Savino explains that the reception to Bad Party has been much warmer outside the city. That's a very Detroit truth. "It's funny. When we go to L.A., there will be a couple hundred kids there," he says. "Everyone in Detroit is a backstabber. Well, not everyone. But, a lot of people are assholes. Detroit, it's a small town. It's like everyone's in fucking high school. If you're good they either really love you or they make sure you don't get any shows, all jealous and shit."

And Savino's not exactly a tolerant person.

"A lot of people are just dicks. And I get crazy violent, so it's not a good combination. When I was younger, I was known to just attack somebody. I don't do it anymore. But, if I get it in my head that I don't like someone, I'll just run at them across the bar."

Bad Party's debut LP, Coming Out Slowly , dropped in late '08 through indie noise label Animal Disguise. It didn't quite capture the band's biting verve, but it at least provided a sample of how intense the band could be. Savino says the album was real labor, but the reception has been good.

"I think, 'cause I'm a bit of a perfectionist, we had seven or eight different people try to record it over two years," he notes. "Seriously, it was just a fucking nightmare trying to capture what that sound was. It's not like we had a record company just shove us 10 grand to go into a studio. We just kept trying people and it always ended up not sounding right."

When asked about his vision for the future of Bad Party, Savino channels some inner megalomaniac. "I'd like to corrupt all of the nation's youth," he says, smirking. "But it would be nice to take over the world. I'd like to have my own army." When not planning the takeover of the world, he says he and Kearns are planning a European tour and releasing of a slew of new material.

Despite his dreams, Savino is on hard times right now. In fact, he says that if he hadn't spent his life savings on his Corktown home, he'd probably be homeless right about now. Revisiting his vision of the future he says, "I'm surprised [the band] has been going on for this long." It would be nice to see a completely bonkers noise band like Bad Party ascend to the upper echelons on popular music fame, but, to be blunt, this ain't garage rock.

"I don't sound like the Kinks. And I don't have long hair. And I don't play guitar. People in Detroit don't understand how much of a joke the garage rock thing is. All these shit bands that live in, like, Birmingham. 'Where are you from?' 'Oh, I'm from Detroit.' Yeah."