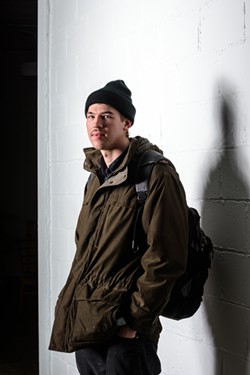 Julian Kendall is the type that would be much happier remaining obscure. He's a man of few words, but listen through his Soundcloud and you'll find his music tells a different story. Kendall has plenty to say, but he speaks through the machines, pulling the intangible from his well of tangled thoughts. Titles like "Ghosted," "Random Programs," "In The Fog," and "Misunderstandings" give a good picture of just the kind of emotions Kendall is breathing into his music. Of course, there are others that speak of a lighter side, tracks like "Cruisin," "Corned Beef Sandwich," and "Hey!!" (that last being a personal favorite).

Kendall makes the type of electronic music that meanders along unexplored boundaries, controlled chaos, while heading somewhere definite. There is an end goal in mind, despite the feeling that one has fallen into a patch of Juno 106's, Yamaha dx 21's, MPC 2001xl's and they all start talking at once — synthesized frequencies with a language all their own, debating how and why they've come into being. This is Julian Kendall's music — him and the machines communicating.

Originally from Chicago, he moved to Detroit to pursue music interests and while he doesn't consider what he makes "techno," he does have quite a few influences from early Chicago and Detroit dance music. In August, 2015, David Marroquin, the owner of Vanity Press (at the time a new label) approached Kendall and asked to put out his first release. It opened him and his creations to the world, a world that very much appeared to have wanted to hear what he was doing.

So where to find him in action? Well, if you're looking to get your hands dirty and dig for some gems on wax, you can find Kendall at Hello Records where he's worked for the last two years. Other than that, every fourth Friday Kendall, along with friend Conor Mendanhall, run a showcase they call Temple Trax — a platform for up and coming DJs to display their talents. It's a night they've held since 2014 and it continues to be a great place for local DJs to come through and get some exposure.

As far as what's next for Julian Kendall, his forthcoming release will appear on an imprint called Crisis Urbana (run by Detroiter DJ Rawaat). No doubt there will be more where that came from.