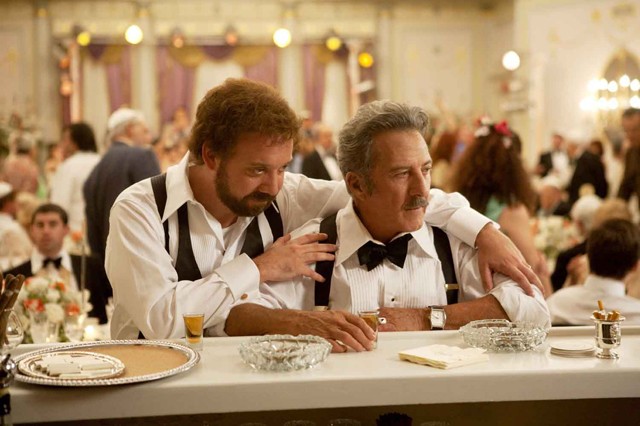 Over the three decades we see during Barney's Version, Paul Giamatti ferociously indulges in every unsavory quality you can imagine in a man without actually inciting us to hate him. Barney Panofsky is brash, self-sabotaging, misguidedly loyal, sarcastic, tender, prickly and, at times, outright pathetic. He's an irascible and ultimately regret-filled man who may not earn our sympathy, but strangely becomes someone worth caring about. It's a feat that makes clear that Giamatti's Golden Globe Award was well-deserved. Too bad he didn't get more help from director Richard J. Lewis and his screenwriter Michael Konyves.

Edgy yet maudlin, their adaptation of Mordechai Richler's 1997 novel is a rambling character piece that clings too tightly to its source plot points, misses the author's self-critical instincts, and never figures out just who Barney is. Instead of getting inside this man who's forever at war with his own best interests, their film merely observes him, letting Giamatti do all the heavy lifting.

It's not enough. After spending more than two hours under a microscope, Barney never becomes clear. And so what could have been a fascinating and complicated meditation on trust, self-worth and love instead becomes an intriguing yet frustrating exercise in unearned sentimentality.

When we first meet Barney, he's in his 60s and crank-calling his ex-wife's husband at three in the morning. Turns out he's been married three times. Flashing back to Rome in the early '70s, we meet his first spouse, a gorgeous but unstable redhead (Rachelle Lefevre) who breaks his heart then takes her life. This inspires him to give up his boho lifestyle and return to Montreal, where he gets into television and rebounds with wife No. 2 (Minnie Driver), a crass caricature of insufferable Jewish princess-ness. Barney not only has instant regret, he spies Miriam (the lovely Rosamund Pike), the girl of his dreams, at his own wedding. Ditching the reception, he fruitlessly and obsessively pursues her ... and doesn't stop until, years later, he makes her his third wife. From there, the movie quickly hops, skips and jumps through 20 years to get to the inevitable marital breakdown.

There are also subplots involving the mysterious death of his drug-addicted best friend (Scott Speedman), a murder accusation, Canadian in-jokes with cameo appearances by directors David Cronenberg and Denys Arcand, and Dustin Hoffman (delivering one of his most winning performances in a long while) landing the film's biggest laughs as Barney's incorrigible ex-cop dad.

Barney's Version is clearly meant to be a complicated story about a complicated man, filled with the kind of narrative layers that enrich a novel, but make the film's neglected parts all the more noticeable. For instance, not only do we miss the bonds that hold Barney and Miriam's marriage together for as long as they do, she only comes into focus as she leaves his life.

Lewis' approach never feels cinematic (he's a veteran of television), and his movie lacks the rude eccentricities of, say, The World According to Garp or The Apprenticeship of Duddy Kravitz (also by Richler) — films it clearly takes inspiration from.

There's little doubt that Barney's Version flirts with some big ideas. Issues of Jewish identity, betrayal, self-doubt and loss (emotional, physical and mental) are all part of the film's tapestry. And with Giamatti's riveting performance, it's hard not to believe there's more going on than there actually is. But, like so many other well-intentioned literary adaptations, it's hard to figure out just what the point of the film is.