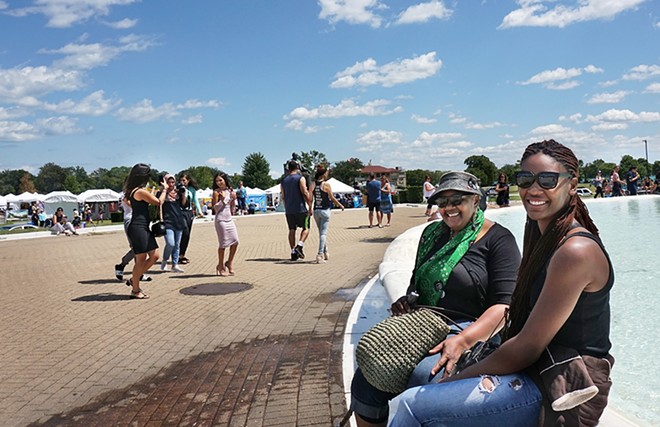 Thurs. 8/5-Sun. 8/8: The Motor City is thirsty for cars. Not only is it impossible to get your hands on a new — or used — set of wheels, thanks to an international chip shortage, but we've also been deprived of popular events aimed at car enthusiasts, namely the North American International Auto Show, which has been canceled for the second year in a row. Fret not, as the Detroit Auto Dealers Association and the Downtown Detroit Partnership are teaming up to satisfy our need for speed, er, cars with the Motor City Car Crawl. Described as a sprawling, walkable, city-wide event, the Motor City Car Crawl will showcase new cars throughout the downtown area, including Beacon Park, Cadillac Square, Campus Martius, Spirit Plaza, Capitol Park, and Grand Circus Park. The event is free, however, there is a ticketed event on Saturday, Aug. 7 that will benefit eight local children's charities. —Jerilyn Jordan

Fri. 8/6: In the last year, it's been made clear that mainstream country music has a problem. Well, a few problems. First, there's Morgan Wallen, the country star who was taped angrily using a racial slur. Though the music industry barred him from awards shows and some radio stations stopped playing his tunes, his record sales soared in the days after the video of Wallen using the n-word was released, and by increase we're talking a 1,220% increase in digital album sales and 327% in physical album sales, which is problem numero dos. While country music deals with its, well, shit, there are some major voices in the genre that are flipping the script on the hateful narratives pushed by other country folks. Enter Chris Stapleton, the 43-year-old Kentucky native who told CBS News that he supports the Black Lives Matter movement. "I think everybody should be doing more," he said in 2020. "There's a very broad awakening I guess that's come about, and it's time for me to listen. And it's time for other folks to listen." Mmm. That level of awareness goes down like a glass of chilled bourbon. Stapleton, who took home the award for Album of the Year at this year's Academy of Country Music Awards, is taking his celebrated record and catalog on the road via his upcoming outing aptly named the "All-American Roadshow," with support by "America's Sweetheart" Elle King on Friday and, on Saturday, England's Grammy-nominated singer-songwriter Yola, who is quite literally stomping country music's nasty reputation with her "Diamond Studded Shoes'' will take the stage. Meanwhile, Kendell Marvel will perform both nights. —Jerilyn Jordan

Sat. 8/7 & Sun. 8/8: Is there anything better than marveling at Belle Isle's Scott Fountain when it's in action on a steamy summer day? How about a massive art show featuring more than 100 juried artists from across the country with free interactive art projects next to Scott Fountain? Well, that's what the annual Belle Isle Art Fair, once again, has in store for cooped up, art-loving folks who will be given an opportunity to gawk and/or shop till they drop some cash on a one-of-a-kind art piece to beautify their Zoom backgrounds and, you know, because there has never been a better time to support artists. The show, which will feature artists, makers, and creators across a variety of mediums, including painting, woodworking, metalwork, ceramics, jewelry, textiles, and more, ranging from less than $20 to more than $10,000. Returning to this year's event is the Heritage Artist Tent, which provides older artists the chance to continue or renew their art fair participation, while the Mint Artists Guild showcases artwork from teen artists. The fair will also feature food trucks to prevent accidentally spending $5,000 on a portrait of Joumana Kayrouz when your blood sugar tanks. —Jerilyn Jordan

Sun. 8/8: It's not Guns N' Roses' fault that former president Donald Tr*mp thinks "November Rain" is the best music video of all time because it fucking is. But don't think for a second that GNR's lead singer and personification of a pawn shop jewelry counter Axl Rose is saluting that orange bag of shit, in fact, Axl is an outspoken member of la resistance. Be it Paradise City, a jungle, or an unseasonably rainy November, Axl, Slash, and Duff McKagan are here to restore our faith in love, life, cool hats, and rock 'n' roll because, you know, Imagine Dragons and Foo Fighters are, like, all we've got. Woof. Anyway, picking up where their 2020 plans were squashed, GNR will bring their North American stadium tour to Detroit's Comerica Park. The last time the "Sweet Child O' Mine" rockers paid a visit to Detroit Rock City was in 2017, when they performed twice within a year, including the first stop of their massive 150-date record-breaking"Not in This Lifetime" tour. And now Detroit will once again bask in the over-accessorized shrieking and shredding that only GNR could serve up. See? Patience pays off. —Jerilyn Jordan

Tues. 8/10: Do you ever wish you could just hop in a time machine and book it to 1994 so you could experience Green Day's Dookie or Weezer's debut, lovingly referred to as the "blue album" for the first time ? Oh, so it's just us? For the record, we would also gladly make a stop in 2005 to dance, dance to Fall Out Boy's hit-packed sophomore release, From Under the Cork Tree. Well, no need to, you know, invent technology that's not yet available to the general time-hopping public because the Hella Mega Tour is finally coming to Detroit's Comerica Park after being announced in 2019, another year we wouldn't mind revisiting. What? It was a good music year. Anyway, the Hella Mega Tour celebrates pop, punk, pop-punk, alt-rock, and, uh, this year's Van Weezer, an album that finds Rivers Cuomo and co. embracing anthem arena rock. Meanwhile, Billie Joe Armstrong and his mean, green, punk machine is trading boring ol' masturbation for ... positive affirmations? The band's Detroit tour follows the release of a shockingly uplifting new Green Day bop "Pollyanna," which finds Armstrong singing shit like "Every day's a jubilee/ It's wonderful to be alive," ultimately taking us back to high school with some much-needed Jimmy Eat World "The Middle" energy. Just please don't make us time-travel back to high school. Just ... don't. —Jerilyn Jordan

Wed. 8/11: Grammy-nominated trumpeter and composer, two-time Edison Award winner, and JazzFM Innovator of the Year recipient Christian Scott aTunde Adjuah has jazz in his blood. The 38-year-old New Orleans native, Berklee grad, and maker of what he calls "music with nutritional value" is the grandson of Big Chief Donald Harrison Sr., the only man to be the chief of four tribes of Black Mardi Gras Indians — and a lover of jazz. With more than 15 solo records under his belt, Adjuah has built a career on bending and stretching contemporary jazz beyond its conventions, striking a balance that is polished, raw, and emotive. Just take Adjuah's 2010 track "Ku Klux Police Department," a composition made as the result of the performer being racially targeted by New Orleans police, who harassed and intimidated him. The song is anxious, chaotic, and textural, and sounds like a lamenting Radiohead track while also evoking power and persistence. For this performance, Adjuah will be joined by North Carolina trio the Hamiltones and fellow Afro-Native American and multi-octave vocalist Mumu Fresh, who explores her ancestry, justice, and celebration of the soul through poetry, rap, and mindfulness. —Jerilyn Jordan