The Subterraneans' most heard beats in 2010 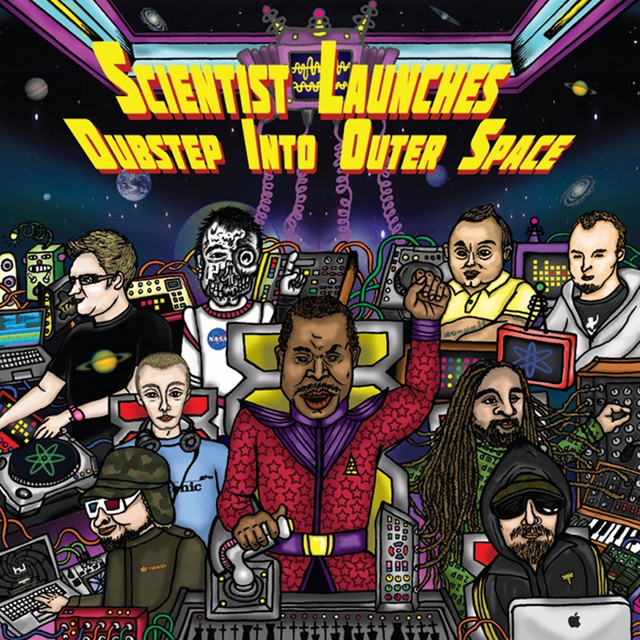 The year in reverse is good for unexpected surprises. It's nice to revisit a thrilling-fleeting-crushing-booming moment from last January or March and reaffirm that it still steps up today. Not everything is like that. I prefer to be slowly overpowered and overwhelmed by the frigid brilliance of Thomas Koner's re-released ambient space dub trilogy Nunatak/Teimo/Permafrost.

All three are master works of glacial sound design and post-rave blues, now DJ-ready for first time in 2010 on Type Records. It's an uneasy listen but there's a party going on in there all the time — if you can find it.

Adventurers in the ever-expanding bass scene are advised to look high and wide for the double CD Scientist Launches Dubstep into Outer Space. (Follow me here: for anyone who has strayed from electronic music in the last 18 months or so, make a note that dubstep, 2-step, garage, jungle, grime, hardcore, UK rave and UK funky can now be consolidated under a low-end brand of its own.)

This spliff-loving protégé of King Tubby has been micro-engineering and detailing soundwaves for 40 years. The Bristol-based crew from Tectonic snagged him to re-work some exclusive jams by Kode 9 + Spaceape, Pinch, Shackleton, King Midas Sound, Mala and other prominent contemporary dubcats. We recommend heavy rotations on this one, but not before you pass the chalice and exhale.

Follow this dread thread through the past 12 months and more gems of similar ilk begin to emerge.

For the best compilation yet of U.K. funky (ragga meets house framed by dub) you could do worse than to pick up the two-disc Riddim Box on the always reliable Soul Jazz imprint. Zero in on LV feat. Rubi Dan and Errol Bellot's "Crossfire." If you can't get enough of that seek out LV's "Cemetery Dub" on a separately-released 12-incher on the same label, or his collabs with Untold ("Beacon" on Hemlock) and Okmalumkoolcat ("Boomslang/Zharp" on Hyperdub). All smokin'.

The great thing about this stuff is how culturally diffuse it is, coming out of a London filter but collecting beats originating in the Middle East, North Africa and increasingly, South Africa. That's where London-based Honest Jon's (co-founded by Damon Albarn of Blur and Gorillaz) tapped Shangaan Electro New Wave — Dance Music from South Africa, one of the year's quirkiest collections. Ever try dancing to rhythms that clock in at nearly 200 beats per minute? Ha!

Tastemaker Mark Ernestus of Berlin's Basic Channel and Rhythm & Sound also had a hand in this discovery. Speaking of Ernestus: check out his "Masikulu Dub" with Konomo No. 1, a double-sided 12-inch treatment on Congotronics.

More tasty bass came from familiar places: Shackleton's Fabric55 mix CD and the single on his new Woe to the Septic Heart! label, "Man on a String Part 1 and 2/Bastard Spirit"; cv313's "Subtraktive," including versions by King Midas Sound, the Sight Below and Deepchord presents Echospace — the Port Huron-Chicago team (Rod Modell and Steven Hitchell) behind the cv313 moniker; the Bug's "Infected" EP; Mount Kimbie's Crooks & Lovers full length on Hotflush Recordings; and seemingly everything Ramadanman (Londoner David Kennedy) touched, including a collaboration with Appleblim, "Void 23," that features a re-edit by Carl Craig.

And unfamiliar: "Stalag Zero/Distended Dub" by Ekoplekz on Bristol's Punch Drunk; Skyscaper's epic "Skyshapes" on Ghost Sounds; and a new sound rising out of Chicago called juke, largely given play by random DJs and remixers on YouTube, brought together beautifully by Planet Mu on Bangs & Works Vol. 1 (a Chicago Footwork compilation).

Worth the dig: Splazsh, the second full-length by London-based Actress; and everything put out in 2010 by Manchester's Demdike Stare (Osmosis and Industrial Desert mix CDs; and Forest of Evil, Liberation Through Hearing, Voices of Dust LPs, which the Modern Love label is releasing later this month in a handsome three-pack version. Get it.

Also going 'round and 'round in my world, two splendid releases by Mark Fell (of hugely underrated Warp records duo SND), UL8 (Editions Mego) and Multistability on Carsten Nicolai's Raster Noton; turntable artist Philip Jeck's sublime An Ark for the Listener (Touch); and one of the strangest of the year, Die Alten Bosen Lieder, a 12-inch + CDr release on Mordant Music. The artist is Vindicatrix, a British kid who croons haunting Scott Walker-inspired ballads in German while processing dark-electro beats standing inside a pentagram. Find his bewitching stuff on YouTube, if nowhere else.

Finally, 2010 will be remembered as the year that Detroit techno turned an unofficial 25 years old, feted with parties around the world and around the corner (at Movement in May and in December at the Works; not to mention an unannounced guest appearance by Moodymann with Kode 9 and Flying Lotus at the Magic Stick in April; and Theo Parrish's spectacular closing performance at Montreal's MUTEK in June).

The hits just kept on getting made and re-made: Rush Hour in the Netherlands reissued the back catalogue of Anthony "Shake" Shakir, Frictionalism 1994-2009, Rick Wilhite Presents Vibes New and Rare Music (featuring Kyle Hall, the Godson, Urban Tribe, Theo Parrish and Marcellus Pittman) and Early Works by Recloose — who is now based in New Zealand, in case you're wondering.

Detroit-based Fit released three 12s: one each by Pittman and Shakir, another by IAMTHATIAM (Jamal Moss of Hieroglyphic Being); and London's Third Ear continued to push its 4/4 beatdown agenda with EP releases by Kyle Hall ("Must See"); Mike Huckaby/Rick Wilhite/Rick Wade/Norm Talley ("The Defenders of the Deep House World") and Pirahnahead's great "NGTV NRG Stage 1."

The year will also be remembered for the passing of Aaron-Carl, whose restless spirit remains embedded in all we do. May walls everywhere shake in his memory. Groove on, Detroit.