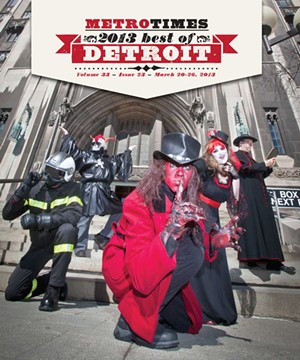 Our favorite new annual event, hands down, is the Marche de le Nain Rouge, an annual event centering on the mythical character known as the Nain Rouge, or Red Dwarf. Officially, the march is held to chase the little guy out of the city, since he’s seen as a harbinger of doom who presages the occasional eruptions of chaos that punctuate our fair city’s history. So, banging pots and pans and shooting flames into the air, a procession of half-serious revelers aims to shoo the dwarf out of the city every spring.

But is this a fair assessment? After all, the diminutive fellow isn’t really causing anything bad to happen. He’s just the messenger, isn’t he? Myths are prone to errors in translation, and a story as old as this one might have been garbled or oversimplified. This impish trickster, when he appears, may be offering us a chance to make peace. Would it not be possible to propitiate — that is to say “bribe” — the tiny fellow? If we offer him the region’s bounty, would he be perhaps moved to not be a pest but a protector?

Because if there’s anything this region has to offer, it’s good stuff. Great shops, terrific bars, excellent food, and good, salt-of-the-earth people. After all, that’s what our Best of Detroit issue celebrates year after year. So we decided to find the Nain Rouge and tempt him with the greatest things metro Detroit has to offer. For a whole day, we feted him with crowds, plied him with food, took him on a whirlwind shopping trip and slaked his thirst with strong drink.

And you know what? When the little dude was leaving, he turned his head and threw us a look that seemed downright friendly.

Maybe this is going to be a good year after all.