Pushing for a Christian theocracy 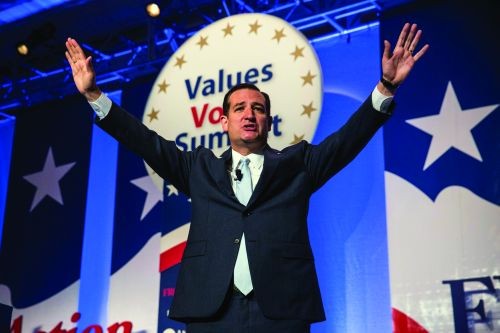 It’s common to hear conservatives say things like Congressman Paul Ryan did during the last presidential campaign: “Our rights come from nature and God, not from government.”

Liberals just shrug when they hear this type of rhetoric, since it sounds like one of the countless other empty platitudes conservatives spout in their efforts to makes audiences feel good.

What liberals don’t understand, however, is that what sounds like an empty platitude actually signifies an elaborate, paranoid theory on the right about “sneaky liberals trying to destroy America,” a theory that is being used to justify all manner of incursions against religious freedom and the separation of church and state.

The Christian right theory goes something like this: Once upon a time, a bunch of deeply religious Christian men revolted against the king of England and started a new nation with a Constitution based on the Bible.

Being deeply religious fundamentalist Christians, they intended for their new society to reflect Christian values and the idea that rights come from God. But then, a bunch of evil liberals with a secularist agenda decided to deny that our country is a Christian nation.

Insisting that rights come from the government/the social contract/rational thinking, these secularists set out to dismantle our Christian nation and replace it with an unholy secularist democracy with atheists running amok  and women getting abortions and gays getting married and civilization collapse.

For some reason, the theory always ends with civilization’s collapse. The moral of the story is that we better get right with God and agree that he totally gave us our rights before the world ends. (Insert dramatic music here.)

Of course, none of it actually went down that way, but there are Christian revisionist historians who are pushing this claim hard. David Barton is a major advisor to all sorts of Christian right figures and he has long promoted the completely false theory that the Founders wanted something very close to a Christian theocracy.

Indeed, in their desperation to make people believe what simply isn’t true, activists on the right have even gone so far as to try to push Barton’s lies about the Founders into public school textbooks.

The notion that America’s founders believed rights come "from God" goes straight back to Barton’s fabricating bullshit-style of “history.”

Despite the fact that liberals rarely engage them on this point, Christian right thinkers are forever ranting on about it. Rick Santorum’s speech at the Values Voter Summit earlier this month is an excellent example of the form.

Santorum delivered an inane, inaccurate lecture about the French Revolution, describing it as doomed from the get-go because the revolutionaries believed in “equality, liberty, and fraternity,” which he contrasted with the Americans who supposedly believed in “paternity,” i.e. the theory that rights come from God.

The Bible-thumping former senator from Pennsylvania debated the long-dead French revolutionaries, assuming that the word “fraternity” was an attempt to avoid admitting there was a God, and then blaming everything bad that happened to France since then on its secularist government.

What’s fucked up about all this is that, in the real world, liberals don’t really spend much, if any, time thinking about this supposedly world-shatteringly important question of where rights come from.

The debates that conservatives are having on this point are occurring mainly with imaginary liberals hiding in their heads (or dead French revolutionaries). If pressed, most liberals would probably agree individuals’ rights stem from a combination of the social contract and a general understanding of what’s fair and not, because God wrote down our rights on some stone tablet somewhere.

We might even note that as much as right-wingers wish otherwise, our secular vision is what the Founders originally imagined. But for liberals, the very idea that we’re having a “debate” about this is asinine. Most of us are less worried about trying to figure out where rights come from than we are focused on defending human rights, usually from attacks from conservatives.

So why do conservative Christians care so much? Why is it so important to them to establish that rights come from God that they will make up imaginary liberals to argue the point with, rather than just move on? Two reasons.

No. 1: One, this argument makes it easier for the Right to actually restrict the number of rights they will concede people have, all the while pretending to be pro-rights. Two, it gives them an excuse to ignore the First Amendment and the well-established fact that the U.S. is, like France, a secular democratic republic and not a Christian theocracy.

What’s convenient for those who believe that Jesus should be running America and the “rights come from God” theory is it makes it easier to deny that new rights can be established.

Since the 18th century, many of rights Americans now enjoy didn’t exist back then: The right not to be enslaved, the right of all adults to vote, the right to have some time off from your job.

Conservatives resisted each of these rights and continue on that path to date; resisting more recently established rights, like the right to be free from discrimination based on race, gender, or sexual orientation.

By saying that God informed the Founding Fathers what rights there were, conservatives can claim that any rights that have been developed since then are illegitimate. Sure, it’s a lie, but it’s an awfully convenient one.

No. 2: By claiming that rights come from the god of fundamentalist Christians, conservatives can simply dismiss the idea that the rest of us have a right not to have their religion imposed on us.

Santorum was very clear on this point, angrily railing that the secular view of rights meant that while Christians are allowed to go to church, they are prevented from imposing their views on others.

Since rights come “from God,” in his view, an employer who believes in that God has a right to toy with a woman’s insurance benefits to try to stop her from using contraception. The “rights come from God” argument is used to distort the very idea of religious freedom.

In the right-wing view, “religious freedom” becomes the “right” — given to you by God — to force fundamentalist Christianity on others. That’s how they can claim it’s “religious freedom” to force their religion on others by government-sponsored prayer, teaching creationism in schools, restricting access to abortion and contraception, and banning gay marriage.

As tempting as it is to argue a secular version of where personal rights come from, the smarter move is to refocus the conversation. Where rights come from is less important than emphasizing how important rights are for people’s lives.

The right to vote, to get an abortion, to have food on the table and access to a doctor, to marry whom you like: These aren’t rights because your version of God whispered it in your ear.

We respect these rights because we know that people’s lives are made worse if they don’t have them.

At the end of the day, distracting from real people’s lives is what conservatives are trying to do with all this talk about rights coming from God, and liberals — or anybody who believes in freedom — should allow that to happen.

Amanda Marcotte is a contributor to the Metro Times and a writer at Alternet.org. Send comments to letters@metrotimes.com.