Beyond Kid Rock, in a solo space

Guitarist Kenny Olson is bringing it all back home 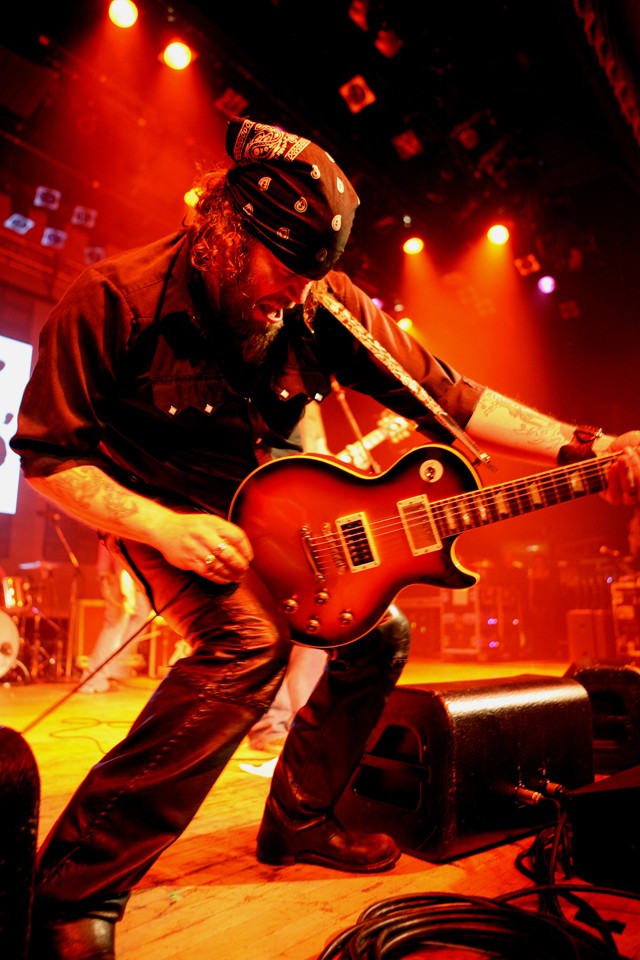 When I was initially pitched this story, I was presented with the idea of a guitarist pulling himself out of the shadow of Kid Rock. That is, of course, no easy task. Like him or not, Kid Rock is an immense personality and Kenny Olson was a member of the Twisted Brown Trucker Band for a full 11 years.

That's 11 years of touring the world and performing in front of enormous audiences night after night on the biggest stages, of living it up on luxury busses and planes, of sharing stages with the likes of Metallica, Aerosmith, Run DMC and just about every other giant of rock and hip-hop. Let's face it — it's a really, really nice way to make a living. Olson was even turned into a Simpson character. That's the big leagues.

But about five years back, Olson decided that he had had enough. He hints that there might have been some words exchanged between Kid Rock and himself, but won't elaborate. Regardless, he was done playing Kid Rock's music, and he was ready to step out on his own.

Now, that's a brave move. No matter how disillusioned someone is with music, to fly the nest when that nest is built with dollar bills is a step that has to be admired. Security, especially in this economy, is nothing to be sneered at. Yet, when talking with Olson, it was the most natural move in the world.

That consistent with his demeanor, his laid back cool. He comes across as the chilled-out rock star who cares about little in life other than his guitar, his tunes and his bandmates. He's not devoid of passion; you just have to hit on the right subjects.

Olson relocated from Detroit to Nashville after leaving Rock. "I moved down here when I quit playing with Kid Rock in '06," the guitarist said over the phone the other day. "I was out in LA for a little bit, working with Eddie Kramer on a record. I moved myself down here to Nashville, and I've been down here ever since."

It would be easy to lump Olson in with Rock and his good ol' boy, simplistic song craft, but that would be a mistake. Olson is a well-respected guitarist, one of our best in fact, something that is reflected in the greats that he has played with. "Even when I was with Kid Rock, I was doing a lot of stuff down through the years," Olson said. "I was very fortunate through the '90s to do stuff with the Hendrix Family, Billy Cox, Mitch Mitchell, Buddy Miles, Paul Rodgers, Chaka Khan, and then the Les Paul & Friends record. I got to play with a lot of people that, growing up, I never believed that I would be playing with. There are also a lot of up and coming artists that I've worked with.

"But the Kid Rock thing was great. We pulled off something pretty incredible. We traveled the world playing the biggest gigs. Our debut album was probably one of the last debut albums to come out and 12-13 million copies or whatever it sold. The industry has changed so much. I'm grateful for all of it. But I left the band because I wanted to start a project with some other guys, and that was a great project, but at this point, starting a whole new band was tough because the industry was upside down at that time.

"I found that the collaborations and stuff that I had done through the years I could call the Kenny Olson Cartel, and that allows for me to have my core band and travel. I'm also free to have lots of special guest appearances, kind of like Santana or Slash or even Mick Jagger. A lot of different people have done that through the years. It's enabled me to really experiment with a lot of different kind of things. I'm definitely having a lot of fun doing what I'm doing right now, and I think we're making some really good stuff too."

Even the mighty Keith Richards himself has said that Olson is "one of the best rock guitarists on the scene right now." High praise indeed.

Olson was suitably humbled. "I heard him say it, and that was quite an honor coming from someone I've looked up to my whole life," Olson said. "I come from old school influences. People like Keith, and Billy Gibbons, Jimi Hendrix, Buddy Guy and Muddy Waters. A lot of these legendary blues and classic rock guys have passed this torch down, and I've been able to take it and keep it burning. I'm trying to say it without blowing my own horn. But it's been quite an honor. Playing with Les Paul before he passed away. It's been pretty amazing. I've been fortunate enough to play with a lot of legendary people who have blessed this planet. That's part of my mission to save the soul and substance."

That's an expression that Olson comes out with more than once during the interview — to "save the soul and substance." It's obviously a noble cause in these days of identikit pop stars, generic radio rockers and bling-bling rappers. Olson, as he proved when he left Kid Rock, has nothing if not integrity. "I'm on a mission to save the soul and substance that a lot of the music industry is lacking in. I want to make great music, but in general, I want to bring back a lot of the fine ingredients. It's got the rock, it's got the funk, it's got the blues, and it's got the soul. It's all in there. I don't think I can pin point it and describe it in a few words."

Like Kid Rock, and as already mentioned, Olson now lives in Nashville. Career reasons are good reasons, but is he missing the D?

"I do miss it," he said. "Detroit is always going to be where I'm from. I miss Detroit and I love coming home. I haven't played a show in Detroit for a year and a half or a couple of years now. Detroit is always going to be my home. I always say with a very proud smile that I'm from Detroit. So many artists came from Detroit, from the Motown to the Stooges — everything. It's a breeding ground for such amazing talent. It's sacred land. Even though it doesn't look like it — there's something very sacred about Detroit. I'm down here now doing what I've got to do, but I'm back and forth a lot. I'll never call anywhere home but Detroit."

Olson is playing a homecoming show on December 29 in celebration of the release of the debut, self-titled and self-released album from the Kenny Olson Cartel. It's a tremendous album featuring a core band and guest musicians. The likes of Detroit's Brandon Calhoon, Peter Keys (Lynyrd Skynyrd) and Billy Cox (Hendrix) show up in places, but it is the guitar work of Olson on what is essentially a blues-rock album, plus the strength of the song writing, that makes the album such a beast. Olson is predictably happy with it. "There's a little bit of everything for everybody on it," he said. "It's definitely rockin', but it has some soulful roots to it. In general, I think I'm pretty happy with it."

So what can we expect from the show? "I have a majorly rocking show planned," Olson said. "There will be different special guests coming up too. I'm excited to come home, bring this band to the stage at the Magic Bag, and have everyone come out and see what we've got. I think everyone's gonna have a good time. A lot of the guys that are playing with me are from Detroit too. My bass player's a Detroiter, one of my singers is from Detroit, my drummer is originally from Detroit too. My bass player still lives in Detroit. Brandon Calhoon goes back and forth between Nashville and Detroit. My drummer was born and raised in Detroit until he was a teenager and then he lived in Memphis. The other guys in the band is from Chicago. Peter Keys is from Detroit. Everyone in my band but one is either in Detroit or from Detroit. We're all down in Tennessee but it's a Motor City band."

Olson pauses, then concluded with, "There's a natural Detroit-rooted sound in the band."