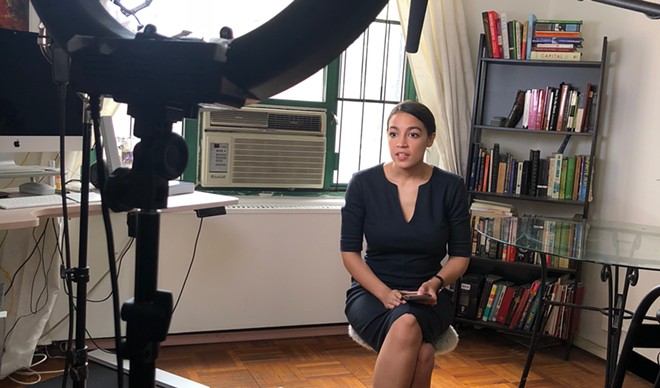 In 2018, when Alexandria Ocasio-Cortez burst onto the scene as an underdog candidate for U.S. Representative of New York's 14th Congressional District, she did so with the help of a scrappy but smart campaign video shot by a pair of Democratic Socialists from Detroit: Naomi Burton and Nick Hayes, of Means of Production.

The video cost the duo less than $10,000 to shoot, largely because they simply followed Ocasio-Cortez around, showing the real her. "This race is about people versus money," Ocasio-Cortez says in the ad. "We've got people. They've got money." Within a day, the video had amassed more than 300,000 views — and helped secure Ocasio-Cortez's stunning victory.

Burton says that, at the time, Hollywood producers started reaching out to the duo to congratulate them on their success. That's when she and Hayes started talking about their next idea: a leftist, worker-owned streaming platform.

But now, once again, Means of Production have proven the power of people over money. Less than a year ago, the duo launched a crowdfunding campaign for Means TV. The new platform celebrates its international launch with a premiere in Detroit on Wednesday. "No advertisements or product placements," the platform promises in a press release. "No corporate backers or VC cash ever. Means TV entirely funded by people."

"It's a post-capitalist, anti-capitalist perspective," Hayes says. "We have over a dozen feature-length films, all of them are talking about the different issues we all experience every day under capitalism." Initial offerings include The Last Days in Chinatown, Detroit artist Nicole Macdonald's documentary about Midtown's gentrification. The Detroit launch party will screen Gaza Fights for Freedom, a documentary by journalist Abby Martin. There will also be animated shorts, comedy, and even live morning news and sports shows.

"The idea is it's not just a bunch of boring documentaries," Burton says. "It's entertaining, but it's all based in the reality we actually live in — versus the one Netflix tells us we live in."

The problem with mass entertainment for the past few decades, Hayes says, is a gulf between "what is portrayed on-screen and what normal, working-class people experience" — think Friends, for example, a show about four people who live in what would be a giant, multimillion dollar apartment and somehow they never talk about being able to afford it.

"It's a totally different world," Hayes says. "And it's not relatable. What's so cool about film and television is that it's an incredible tool for empathy and for relating to other human experiences. But a lot of it is just used for stories that aren't anything anybody can connect with."

There's also the fact that, despite all its boasting of "disrupting" the mass-entertainment industry, a streaming service like Netflix isn't really offering any real diversity of perspectives — you still have an idealized version of reality. And there's also the fact that Netflix is, like Hollywood, also backed by venture capital and corporate interests. The company's CEO, Reed Hastings, for example, is a booster of privatizing schools in Los Angeles. For that reason, Hayes has little faith that Netflix would ever host a documentary film critical of charter schools.

"Our biggest criticism of entertainment, broadly, is the pervasiveness of advertising and venture capital, and shareholders who have significant investments and things like defense or natural gas and oil," Hayes says. "We think that those same people creating our entertainment is wrong."

To that end, Means TV is funded only by its subscribers, who pay $10 a month for access to Means TV's library of films, as well as a community message board where viewers can discuss the content.

"We've gotten that question a lot — like, 'You're using money, how is that [post-capitalist]?'" Burton says. "It's like, you know, we are still functioning in this world, and exchanging money isn't capitalism. Being worker-owned and people-funded is the way we can be totally independent of basically what all other streaming services are beholden to: venture capital and crazy rich guys."

The duo say they sourced most of Means TV's content from like-minded individuals, as well as creating their own."It's really been amazing having so many people reach out to us via email or via social media with these incredible films that either never went anywhere or they never quite got finished, but they're this really incredible story and we could help throw a little money and get across the finish line," Hayes says. "A lot of that has truly been just people reaching out to us, people wanting to have their films on Means TV, and us trying to work with them as a studio to get them across the finish line and get it ready for general audiences."

‘We want to create that same sort of situation where it’s like, you’re immersed in a world of leftist entertainment — it’s entertainment that is punching up, that aligns with your values.’ tweet this

There will also be an original series called Bad Future, which Hayes describes as "a dystopian kind of show about, you know, what it's like to live in a capitalist dystopia like the one we're currently in," which was shot in Los Angeles.

Despite the L.A. connection, Burton says for now Means of Production will continue to be based in Detroit — "The only place we can afford to be," she says — which is why Detroit gets the world premiere. As far as the future, she says the hope is to invest any earnings into creating new content.

"We really want this to be a profitable cooperative," she says. "We want to be able to hire and pay more people to do this, and then also bridge outside of video to video games, and other spaces that we can make cooperatively to give people a chance to kind of unplug from, like, the corporate jobs that we all are forced to have."

"Right now, when you think about the media you consume, it's like, you can go an entire day and consume media that's just from one conglomerate — you know, you could watch five different shows on three different streaming services that are all by Disney, or it's all Viacom, or whatever," Hayes says. "We want to create that same sort of situation where it's like you're immersed in a world of leftist entertainment — it's entertainment that is punching up, that aligns with your values. So we want to create that same kind of viewing experience."

Hayes also says he's proud that the premiere will be held in Detroit. "It's really cool to be able to have a red carpet event in Detroit be based in Detroit, and be entertainment that isn't, like, where every day in the show is sunny and looks exactly the same," he says. "Like, this is the Midwest, baby."

"And to have an event that's not, like, sponsored by Ford is refreshing in Detroit," Burton says.