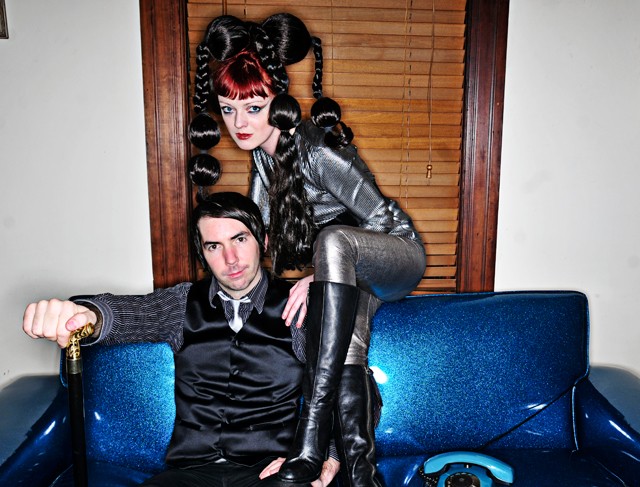 When the first item on your Saturday morning to-do list reads "make oversized alien heads with friends," you know you must be doing something right. And for Marcie Bolen and Deleano Acevedo, the creative forces behind Detroit electro-rock duo Silverghost, that's all part of the plan.

The duo has pretty much been a self-contained world, exploring the fuzzy, fuzzed-out electronic otherworld of rock, creating a galaxy of synth-driven, guitar-colored sights and sounds for a growing base of fans — both local, coastal and within an after-work drive — for more than three years. And they've done it their own way. And, this Saturday, Silverghost drops its (naturally) self-released debut full-length, The Year We Make Contact, at Ferndale's Magic Bag Theater. It will be a homecoming celebration of sorts, complete with video evidence of the duo's travels beyond the galaxy, and visits from some alien pals.

See, according to the album's backstory, Silverghost has recently returned from a distant binary planet that may or may not resemble our own in subtle ways, but is nevertheless alien. The document they've put together catalogues their observations of the planet SR-001.

The Year We Make Contact is chock-full of musings about technology, alienation, connection and the perils of fame and fantasy. In other words, it's classic dystopian-glam fare. Riding a heady line between Gary Numan's Tubeway Army, alternate-reality-infused synth-pop and boy-girl affection and disaffection, The Year We Make Contact — the album, as well as the accompanying film — was concocted in the Bolen and Acevedo's Ferndale home, and finds the band crystallizing the appeal of their handmade, world-ready approach to making art in an era when anyone can do it — although few pull it of with such aplomb, vision and drive.

Anyone with a pulse and at least a handful of brain cells dedicated to following Detroit's music scene will certainly recognize diminutive, flame-haired, porcelain and seemingly inscrutable Bolen. She was the co-founder and rhythm guitarist for the breakout raw rock quartet the Von Bondies, the grounded, cool yin to lead singer Jason Stollsteimer's wailing yang. She struck a chord with both her sonics and her presence. On stage, she seemed to personify the kind of post-punk tough-girl cool that the Cramps' Poison Ivy had defined for a generation of lady ax-wielders.

Deleano, for his part, had been making and performing "relaxed, more ambient, chilled-out" compositions.

The pair met at a mutual friend's Fourth of July barbecue in Detroit in 2006.

"There were literally fireworks," jokes Bolen, getting the bad pun out of the way immediately.

At the time, Bolen was at loose ends, but feeling the urge to get something new started.

"I had been trying to find people to play with," she recalls. "'Cause I wanted to start a new band and had started writing songs. It just wasn't really working out."

So she took some time and started adding atmospheric guitar parts to Acevedo's jams when he played live. So, they thought, why not try something new — together.

"When we formed Silverghost, we started writing all the songs together," Bolen says.

"When it first started, we were both playing guitar. It was more rock 'n' roll," continues Acevedo.

"We went to the basement one day and plugged in a drum machine and I started playing synthesizers. We were like, 'Wow, this is cool!' And we wrote like three songs that day!"

In other words, something clicked.

Still, they tried to recruit bandmates to fill out the sound. "And that just didn't feel right," Bolen says. "Something wasn't there. It kind of just went back to him and me when we first started writing. It kind of drove me crazy. Not knowing what the project was and what the sound was supposed to be. So we kept going. Then we realized that there was a sound there.

"I like a lot more distorted, kinda weird stuff," Bolen says, explaining how they finally cracked the code.

"I've always liked that dirty, raw sound. And Deleano kind of helps bring all the structure together. I think the sound of it took a little while."

Once they got it rolling, though, the duo quickly became ubiquitous, playing often and sharing the stage with friends old and new. It was a pragmatic, classic new-band anywhere-anytime attitude that let them hone their sound live and build a following in the process.

"Sometimes, we'd play twice in a weekend. It was good in the beginning, because it gave us practice and we got to get out in front of more and different groups of people in Detroit, Ferndale, wherever."

And for Bolen, it was a chance to figure out exactly how to be a proper frontperson, after years of playing a more supporting role.

"I always liked the idea of becoming a character. I thought it would be the easiest [that way]," she says.

"I love to dress up. Sometimes I wear the same clothing I wear on stage to work. So I feel like I'm not being fake at all. Which makes me feel more comfortable."

That comfort eventually morphed into a cool warmth that feels natural to Bolen.

"I have come to the idea that I really just want to connect with the audience members. It's nice to be able to see people liking the music and you can open up with people."

As they evolved, they made a conscious decision to engage their pop sensibilities more too (as The Year We Make Contact amply shows).

"It's more upbeat now," Acevedo says. "Our songs were a little more chilled. But we just kept writing songs that were more and more pop, I guess. We just kept speeding up and speeding up. ..."

"... to a BPM that would automatically make people want to move around a little bit," finishes Bolen.

And as their confidence increased, their stage presentation evolved. They now have a video projector synched up with their drum machine "playing images that are somewhat of an extension — not 100 percent — of the songs," Acevedo says.

"So it's an added stage characteristic. Me sitting behind a couple keyboards — to some people that might be cool, but some people might not be entertained," he says with a laugh. "Which is what sort of led us into making the movie. We've just really gotten into visual stuff lately. We feel comfortable being on stage."

In conversation, Bolen and Acevedo are generous and egalitarian, one often gently prodding the other to elaborate on a point or leaving space in the conversation for the other to answer. It's a dynamic that's not always present with duos, a rock configuration prone to letting one person drive and the other admire the scenery. Bolen and Acevedo both seem to have a hand on the wheel. And the remarkable thing is that they're getting somewhere. To hear them tell it, that's been part of the design. Less do-it-yourself and more do-it-ourselves.

"We pretty much do everything ourselves. We like to be creative in ways other than music," Bolen says.

"We sit around and think, 'Wouldn't it be funny if we did this?' And we create everything ourselves — just to get the ideas out."

"It's so simple between us. We can practice any time we want," says Acevedo.

That approach paid off when the duo recorded the — massive-sounding, by the way — record at home.

"We recorded the new album in our spare bedroom over the summer," Bolen says.

"When we needed some extra reverb, we'd record in the bathtub. And we did a lot of layering of Marcie's guitar parts — or I'd layer my parts using a Moog for one take and a Roland for another — to give it some extra dimension."

The film that accompanies the album was homemade too, driven by ideas the pair shared about intergalactic contact and made by pure DIY drive.

They filmed most of it in their home, with help from such friends as Michael Polio (from Marco Polio & the New Vaccines) as well as pals from such bands as Gardens and others who came over to lend a crafty hand with costumes, set creation and other necessities. Hence the to-do list that includes making alien heads from papiér-mèche on a Saturday morning.

"We wanted to do something collaborative," explains Bolen. "And we've always wanted to work with Michael, so it was really a perfect opportunity."

"So, it was a situation where we did everything ourselves and, like, Deleano would come home from work and find the entire basement covered in aluminum foil," Bolen says with a chuckle.

The resulting works testify to the pair's ongoing investigation and dialogue into the workings of humans in the post-whatever era.

"It's all sort of mysterious," deadpans Acevedo about the album's backstory. "We basically received a signal from a distant galaxy, which is SR-001. Which happens, in our world to also represent Silverghost-001, 'cause we're putting out our own record," he adds.

"Basically, we travel to a planet, crash into a meteor field, land on this planet and we encounter a strange world with crazy beings. Aliens doing things that humans would be doing — but in their own way."

"A lot of the stuff we're singing about is our take on what's happening in the world. The way people interact with each other. The connection between technology and humanity. How it's changed us. How we're affected by it," he says.

"A lot of songs are about isolation. I kind of feel like technology isolates us, even though it brings us together," Bolen muses. "These were things we were talking about and writing about all the time. But we want to take it from an outsider perspective."

"A lot of it is the idea of a binary system: a two-person unit," explains Acevedo. "A couple. Inside their house, inside their 'network,' what does that look like? It's using metaphors for everyday things via science fiction. Brainwaves were combined for this record!"

"The song 'Disappearing' has a lot to do with maybe being seen as me and Marcie's view of each other, and hoping for people to listen to our music. 'If we disappear into the atmosphere, some may believe we were never here.' That's a hope that people will remember your presence."

"'Night Party' is about people that are kind of wrapped up in maybe the nightlife too much," reckons Bolen, "to where it affects everything that they're involved in, whether it be art, relationships, self-consciousness."

"I mean, we like to go out and enjoy bands and be inspired by art and music," she says, "but we also like to be productive the next day."