Inspection — the latest novel from author Josh Malerman, whose thriller Bird Box was adapted into a hit Sandra Bullock-starring Netflix film last year — tells the story 26 boys who, as Malerman explains, are raised by "a megalomaniac who believes that genius is distracted by the opposite sex."

These 26 boys are raised from birth by D.A.D. and his "Parenthood," or other adult men that aid in the children's education and well-being, in a remote location in northern Michigan with the hope that they'll become the most intellectual men ever raised in modern society.

"And as far out and wild as that kind of sounds, thank God it's balanced by the fact that the same thing is happening with 26 girls in a different tower deeper into the woods," Malerman says of his book. "So, it's boys and girls that are completely separated in an attempt to see how much more adept they are at engineering and art without the distraction of courtship, essentially."

While Bird Box could easily be described as among the horror or thriller genres, Malerman calls Inspection "a mad scientist tale."

Malerman says the idea for the book came after he had finished another (unreleased) novel and, wanting to maintain his "writing chops," he just started writing something new with no clear intent of what it would become.

Inspection marks the seventh novel Malerman has written, and also his seventh novel to be published, though he's said that he has roughly 30 drafts for novels already written — making it clear that he is nothing if not prolific.

In fact, the project was thrown into overdrive after the idea to tell the girls' side of the story didn't even come about until a week before his deadline.

"I went to take the dog out or something and my fiancée suggested, like sort of flippantly suggested, that I should tell the whole thing from the girls' side, too," Malerman says. "I was like, 'Oh, Allison, come on. You're talking about another 200 pages...' and she's like, 'I was just saying ...'"

The idea now firmly planted in Malerman's mind, he says it ate away at his every waking thought. He called his manager to explain the idea his wife had suggested and that his gut had confirmed.

"Yeah, dude, you have to do that idea now," his manager, Ryan Lewis, told him.

After having the deadline for the book extended, Malerman wrote roughly an additional 150 pages, giving the added perspective of the young women in the story.

"That idea that Allison gave me changed the entire novel and really gave the novel its star character, which is 'K' from the girls' side," Malerman says.

While the first draft was completed in 2007, Malerman's editor, Trisha Narwani, thought the story would resonate more post-#MeToo. Citing themes such as gender equality and misinformation, Malerman says, "There's no question that all these things have seeped into the book through the rewrite and through adding the entire girls' section." 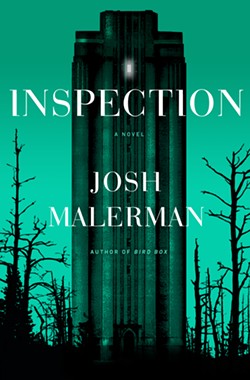 With 26 boys and 26 girls, each child is named after a letter from the English alphabet. The boys are referred to as the "Alphabet Boys" and the girls are the "Letter Girls." However, it isn't long before readers come to find out that two of the Alphabet Boys have been sent to The Corner, a place from which no one returns.

The book is filled with mysteries that begin to unravel as the kids enter an age of their life in which it will become natural to question the world around them, including the authority figures in their lives.

While the boys are written as 11-12 years old, they were originally planned to be 14-15 years old. Malerman says he reduced their ages in order to circumvent having to address the issue of sexuality.

"Obviously, this book should address homosexuality and I would even argue in a big way," Malerman says. "I just didn't want Inspection to be about that."

While sexuality may not be at the forefront of Inspection, Malerman says there is a touch of romance in the book.

"There is the sense that someone tried to shove the natural course of things in a box and the sides split open," he says.