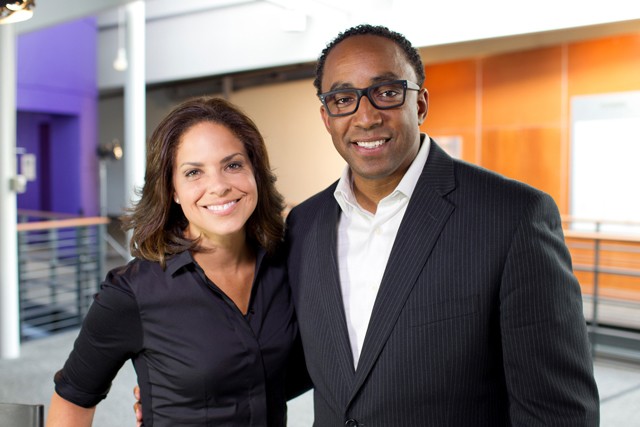 The Tigers didn't make it to the Series (and the Cardinals won it all again, dagnab it!), but you still can see positive images of Metro Detroit on national TV this fall, especially representatives from our two most prominent ethnic groups.

Take Sunday, for example. If your only exposure to African-Americans was on television through daytime court shows (like our beloved Judge Mathis) or primetime reality or cop series, you might believe the majority of black people are undereducated, government-supported, philandering, ill-mannered, baby-producing, crack-smoking parolees. It's the most insidious type of stereotype, possibly surpassed only by the video depiction of every Arab American as a suspected terrorist.

But at 8 p.m. Sunday on CNN — the Cable News Network, so it must be real — TV will show us a group of articulate, brainy, highly motivated tech entrepreneurs who just happen to be African-American. (You actually can see a gentleman of color use the word "eviscerated" in a sentence! It's inspiring.) Then, two hours later, at 10 p.m., TLC offers a unique and provocative glimpse into what it's like to be equally proud of being Muslim and a U.S. citizen with the premiere of the eight-part reality series All American Muslim, produced in and around Dearborn.

Leading off is the fourth in CNN's Black in America documentary specials, "The New Promised Land — Silicon Valley." And the California region where American enterprise is booming and the next Facebook could be just an investors' pitch away might be harder for blacks to enter than the Pearly Gates. According to the on-air statistics related by anchor Soledad O'Brien, 80 percent of all dot-com businesses launched by first-time entrepreneurs fail, and less than 1 percent of all venture capital financing in 2010 went to digital startups created by African-Americans. "This is a white and Asian world here, it just is," one resident observes. You'd have better odds of starting at wide receiver for the Lions.

Nevertheless, eight black tech pioneers from across the country agreed to spend last summer crammed into a boxy three-bedroom house in Mountain View, Calif., for something called the NewMe accelerator program. They shared ideas and strategies while competing for funding to become the next (well, probably the first) black Mark Zuckerberg, as CNN cameras recorded their every move. It's like Shark Tank meets The Real World, with a little Big Brother sprinkled in.

He gets it. "How many times do a group of African-Americans who are not athletes or entertainers have primetime coverage on a major network?" asks Flemings, 39, who distinguishes himself in the special by rocking a sporty Tigers cap. "And this is happening at the prime of our life, of our business life. Typically, if you're in a doc, you've lived your life and they want to tell your story. We're young enough to be able to take full advantage of it."

Flemings, who writes the tech column for Black Enterprise magazine, learned of the Silicon Valley opportunity while attending the South by Southwest interactive conference in Austin, Texas. Almost immediately, he assumed he couldn't take part: His wife, Kasandra, delivered their first child the year before, and an entire summer apart from his baby daughter seemed too great a sacrifice to make.

Kasandra, however, saw the bigger picture. "I could not have done it without my wife," Flemings concedes. "She supported it, we worked together to make it happen. Having that time to really focus on the startup idea was invaluable because once you get back home there's all these other distractions. This allowed me to make a lot more headway."

The opportunities came fast and furious. The group's opening reception at Google headquarters, billed as a casual welcome-to-the-big-valley affair, turned out to be a "Dragons' Den" pressure cooker in which each budding businessperson cold-pitched his or her company plan to a roomful of skeptical investors —all Caucasian, of course. Later, a professor recommends they find an appropriately geeky-looking white or Asian man to make pitches on their behalf — "pattern matching," they call it there — and one of the eight gets stopped and questioned by police "walking while black" near his summer home. "If you're the only chips in the cookie dough, they're going to know that you're there," Flemings says.

Even though he still doesn't know if his gokit.me venture will receive funding from the process, "To me, it was one of the greatest experiences of my life," Flemings enthuses. "And the reason I say that is because it exposed me to an opportunity that a lot of African-Americans don't see. Tech startups operate on a totally different economy, and having a chance to work with some of the iconic tech startups like Twitter, seeing how that whole eco-system works, was priceless."

This installment of Black in America has nowhere near the intrigue of a Real World episode — O'Brien keeps the pace measured and contemplative — but it is intriguing, and in its own small way, groundbreaking. Intriguing, too, is All American Muslim, profiling five families in Dearborn — described in the show's opening minutes as "a whole 'nother world" — and their daily challenge of balancing the expectations of their faith with the realities of living in the U.S.A.

Along the way we'll meet a Wayne County sheriff's deputy, a high school football coach and expectant newlyweds, all united by a common religion. Sunday's opening episode features a tattooed wild-child named Shadia whose impending marriage to her Irish Catholic boyfriend is dependent upon his converting to Islam. There's also a curvaceous event planner named Nina who's more likely to wear hot pants than Hijab, trying to sell friends and family on the idea of her opening a nightclub.

The cultural explanations may seem a bit too simplistic to those of us living here, but they're intercut with scenes of the principal players sitting around a red sofa engaged in open, freewheeling discussions, a nice touch. Anything that can help reduce the level of ignorance about Arab Americans and Islam and replace it with information is more than a nice touch. Allah be praised.