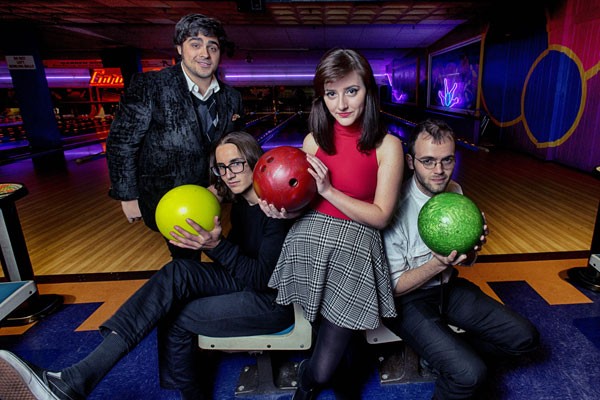 Let’s get this out of the way at the very beginning — Blaire Alise has only just turned 17 years old. This is neither important nor really relevant, but we bring it up because Alise’s age seems to be the first thing mentioned in the press following her name.

Since her band’s triumphant Blowout and Ferndale DIY appearances this year, her age has been metaphorically stapled to her face. Truth is, it’s not important because Blaire Alise isn’t “good for a 17-year-old,” she’s just really fucking good.

Alise is pragmatic about it. “It’s really inevitable,” she says. “I can’t really escape my age. I cannot wait until I’m 21 so that I can get into the Loving Touch. I’ve gotten sent away from venues twice in one day. That was a wake-up call. I’ve played the Loving Touch, but they won’t let me in just to hang out. I can’t escape my age, so I try to embrace it.”

It has to be tough, fronting a hard-working rock ’n’ roll band in a city that demands hard work, but being kept away from certain key places. Not that Alise is complaining. She bounces into our office with an infectious, wide-eyed smile, lead guitarist Craig Adams a laid-back figure beside her. She talks fast. She’s an excitable soul, delighted to be at the beginning of what should be an eventful journey. There’s a touch of glorious naïveté about her; she doesn’t really know yet what the Detroit music scene has in store for her. Everything looks rosy.

Adams is wearing a Blowout pin on his jacket during the interview, leading to accusations from us that he’s trying to kiss our ass. He’s not; the pin simply represents just how thrilled the band was to be on that festival bill in the spring. Adams also speaks fast, and he knows his music. There’s a little more rock ’n’ roll nonchalance to the 20-year-old’s demeanor, a dab of life experience.

The band formed about one year ago. Alise had previously played in a mostly female punk band called Smudge Candy, and had done a summer program at Berklee College of Music in Boston through a scholarship. “I had been writing this throwback music and I wanted to do my own band,” she says. “I was playing stuff by myself in coffee houses, but that wasn’t really my scene. I wanted to be in this scene, with all the cool bands. Craig was also in Smudge Candy, and he and I have known each other for years.”

Alise certainly had a sound musical education. From an early age, she was listening to girl groups like the Shangri-Las, and Motown acts like the Marvelettes and the Supremes. It’s in her blood and, as she matures and her sound follows suit, the songs that she’s writing highlight her potential for a similar longevity if not immortality. She’s also currently in high school, but she manages to strike an effective balance.

“We rehearse a lot,” she says. “This band is a labor of love. I love doing it and all the work that goes into it. It’s a lot of work, but I enjoy it. It’s my passion and what I want to pursue — being a performer and a songwriter. It’s not like a chore so I don’t have a problem with it. At my high school, we have a parent-visiting day. Your parent comes in to see your classes and your teachers. The night before a parent-visiting day, we played at Small’s and didn’t go on until midnight. We got home at 3, and my dad woke up at 6:30 a.m. to take me to school and spend the whole day with me. They’re very supportive, my parents.”

“School’s no different to having a job and playing,” adds Adams. “Whatever time you can spend on music you do, and when you don’t, it’s because of school.”

Not to blow our company trumpet too hard, but Alise and Adams do say that Blowout 2013 has been the Bombshells’ best show to date, both the main New Dodge set and Alise’s guest appearance with the Sights at the Magic Stick launch party. “It was my first Blowout, because I’ve never been able to get in,” Alise says. “I played the pre-party with the Sights and they played one of my originals, and it was so fun. We played the New Dodge with the Sights, Dan Kroha and Kenny Tudrick. We lucked out. That was our introduction into the Detroit music scene. Like, ‘Hi, we’re here and we’re serious. Please pay attention to us.’ It was a great introduction.”

People did start paying attention after that set, and the band is about to release its second 45, Run & Hide. The Bombshells, completed by bassist Ian Mathes and drummer Krystian Quint, are justifiably proud of it, and Alise has no doubt about why it sounds as good as it does — the sweet, harmonic girl group dynamic given a rough, garage edge. “I love being around all these bands,” Alise says. “There’s such a distinctive and unique sound that comes from Detroit. I said earlier that if I was not from Detroit, I would not sound and write the way I do.”

“I really love the history behind Detroit,” says Adams. “I get lost in it. There’s one website that has all the shows and posters from the Grande Ballroom, and I read through that list a couple of times a month. Fleetwood Mac and the Who played with the MC5 one night. Are you serious? It takes me back to a time when underground garage music was a little more influential than it is today. It’s great doing that, and then doing your own shows. I imagine the MC5 and Stooges, like Iggy Pop was excited before a show and now I’m excited before a show.”

That’s the way it should be: young, local bands getting psyched about playing music in a city that has produced some of the world’s best. This weekend, Blaire Alise & the Bombshells play the New Dodge Lounge in Hamtramck with Amy Gore & Her Valentines and New York band, the Split Squad, featuring Blondie’s Clem Burke on drums. Soon afterward, on Nov. 27, the band has its record release show at the Cadieux Café. “You can expect a tighter show than what you’ve ever seen from us before,” Adams says. “We’re air tight by now. We’re playing with Amy Gore and at the music school we used to go to, Joe Leone was a drum teacher. It’s so nice playing in a band that’s super-super good.”

“I think you can expect some new songs,” adds Alise. “We’re going to be recording with Jim Diamond soon at Ghetto. We have a couple of songs that we’re preparing to record for him. It’ll be super-upbeat and you’re going to want to dance for sure.”

To finish, we ask the guys who they would least like to be compared to. “We’d hate to get lumped into the same thing as the ‘child star,’” Adams says. “Like, ‘She’s a kid and Justin Beiber’s a kid.’ That’s not how that works.”