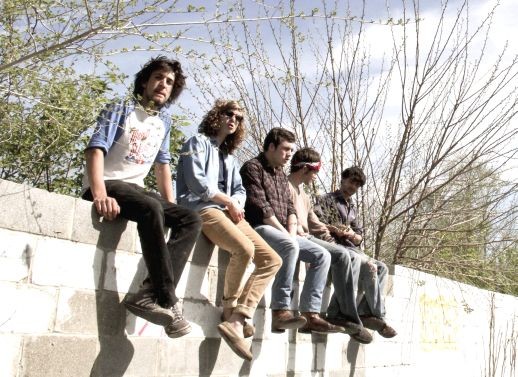 THERE’S A LINE in Kurt Vonnegut’s classic novel Slaughterhouse-Five that reads, “He is in a constant state of stage fright, he says, because he never knows what part of his life he is going to have to act in next.” Members of the Vonneguts (whose name bears a striking resemblance to that of a certain author named Kurt) can probably relate.

All five of these guys are around 20 years old and have stirred up a significant buzz about their band, plus they book shows at a Hamtramck venue and are performing at WhateverFest this weekend. … More on that later.

The Vonneguts, composed of Miles Hubbell (vocals, guitar), Phill Dage (guitar), Jake Kmiecik (drums), Joe Myers (bass), and Mike O’Brien (guitar, bass), met at school. “We got together in high school, an all-boys Catholic school on the west side of Detroit,” says Hubbell. “We were all music-minded, and we were reading Slaughterhouse-Five together as a group when we were 17, and we’re all 20 now; Joe and Mike are a year or two younger. We just happened to form the band around the time that we were reading that book.”

They certainly soaked the book up and allowed the influence to sink in. They regularly post verbiage on their Facebook wall like, “Riding the breathtaking vehicle of rock ’n’ roll into your weekend, you feel the breeze in your greasy mop. The Vonneguts are missionaries aggressively protruding into your psyche. Slowly moving closer. Realizing the end is the same as the beginning. Heed to the blistering guitar and surge into the cosmic abyss.”

As for the music, Hubbell describes his band’s sound as melodic garage psycho pop with rock ’n’ roll and blues elements, and the influences attest to that. “We pull a lot from Detroit rock,” he says. “Like, straightforward stuff, like the Dirtbombs. Also a lot of ’60s stuff; Jake’s really into punk and garage. We’re all pulling from different places but we want it to be melodic and make you prick your ears up and listen because it’ll be so loud. There’s going to be some raw power.”

With the exception of Myers, who is currently studying in Chicago, the band is based in Hamtramck, a city with a thriving artistic community that the Vonneguts are hell-bent on contributing to.

“We run Elijah’s House of Dirt so we play there a lot and met a lot of musicians just through booking there,” says Hubbell. “It’s at 2750 Yemans, and it’s an 800-square-foot space that we’ve been renting out since December. We have all types of music, and that’s what we’ve established as our own. … We also play a lot of house parties. We’re not really a bar band.”

There are actually a whole bunch of bands currently trying to get away from the heavily trodden bar circuit — instead moving toward house parties, art galleries and other oddball venues. These guys are blowing the “gig” concept out of the water.

This weekend’s third annual WhateverFest, an event that takes over Detroit’s Hyesta apartment building on West Forest, is true to that spirit. According to the organizers, “WhateverFest is an annual free local music festival held in Midtown, Detroit. The first two years were absolutely amazing, and it’s only getting better. For those of you who haven’t been a witness to the craziness, prepare yourself. Above all, come and see some of the best up and coming talent that Detroit has to offer.”

Hubbell is psyched. “It’s an all-day event,” he says. “The guy putting it on has 10 or 15 acts, various artists from different genres. They’re doing an outside stage, and throughout the apartment building there’s shows happening on all levels. I think there are three levels. There are shows in the basement as well. I’d compare it to the beginnings of Dally in the Alley. It should be a great time. Also, Jesse Shepherd-Bates’ band, Dr. Handsome, a side project — that should be cool. He’s been practicing in the space and he’s a former member of the Satin Peaches, so I want to see him. There are some rappers coming in.”

Regarding the Vonneguts’ set, Hubbell says, “We’re going to bring some new songs to the table. I think we’re playing last, as long as we don’t get shut down at that point by the Wayne State Police. It’s not illegal, but there will be hundreds of people there and it gets out of hand when a lot of kids are very intoxicated at 8 p.m. and the festival’s already been going on for four or five hours. That happened last year. The cops came into the building and shut it down. Hopefully that won’t happen this year.”

Hopefully not … or that the WSU Police read this week’s Metro Times.

“WHATEVERFEST” IS A unique event, pretty much taking over the apartment complex. Nonperforming attendees are encouraged to bring a musical instrument and just join in. This is old-school hippie cool — and not in any clichéd patchouli sort of way. Other performers include the Rose Cult, Blakdog, Raptura, Frankengrime (love that name) and many more.

The whole thing highlights the new DIY mentality that people like Jessica Hernandez have been pushing. Create your own space, plug in and play. That way, you don’t have to rely on anyone but yourself and your bandmates. The festival seems different to the region’s other offerings, so give it a try. Get yourself prepared first. Everyone likes a sing-along. “ReverbNation.com/thevonneguts has some good songs up and a video,” says Hubbell. “We pressed a 45 with Archer Records and made a video for the song ‘Automobile.’ We have five or six songs up there, plus the video and a biography.”

Hubbell’s next project is different still. “Me and Phill are going to New York City to do street performing and busking for two months,” he says. “[Currently] we drum on plastic buckets outside Comerica Park. It’s a little bit of a social experiment, to see if we can come back with a little bit of profit. We have a hostel for the first week and after that it’s up to us to figure it out. It’ll be open-ended. We want to see what happens.”