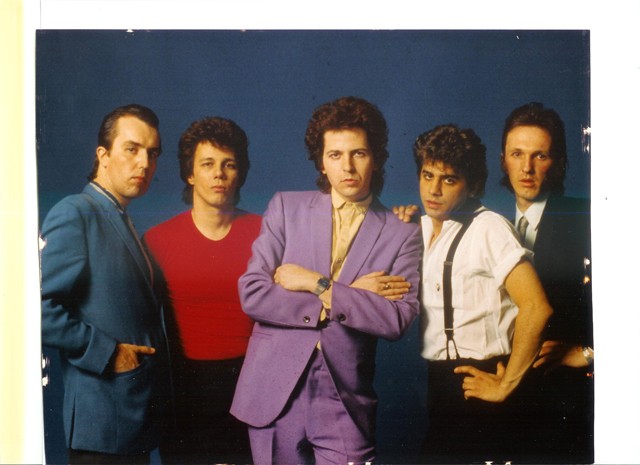 As the late '70s turned into the early '80s, the punk scene worldwide split into two very distinct camps. There was the aggressive, pissed-off hardcore scene, complete with skinheads and circle pits. And then there were the sharp-suited new wave peeps, happy to embrace Beatles influences. In Detroit, the former meant Negative Approach, the Necros, the Meatmen et al. The latter certainly meant the Romantics, but also the Torpedos, though with a bit of Stones.

The Torpedos, formed by former Amboy Duke Johnny Angelos with a trio of musicians from MC5 man Rob Tyner's band — guitarist Robert Gillespie, drummer Ralph Serafino and bassist Mike Marshall — were only together for three years, between 1978 and '81, and they didn't record a full album, yet they are remembered fondly by those that saw them. This band, completed by keyboardist-sax player Tom Curry and bass player Jim Banner (who replaced Marshall in '79) managed to push its way into the Detroit history books, despite the best efforts of the late Angelos to stay out of them.

In the mid-to-late '70s, Gillespie, Serafino and Marshall were playing with Rob Tyner in a band that was commonly referred to as any or all of the "Rob Tyner Band," the "New MC5" or even just the "MC5" (much to the annoyance of Wayne Kramer and the other MC5 guys). They played some high-profile shows, but when it became obvious that the band was over, the Torpedos were born.

"At first, it overlapped and it was really weird because at the time Johnny Angelos lived upstairs from Tyner, so it was awkward because Rob was upset with me and Ralph," Gillespie says. "He was never that crazy about Angelos and, after we left him and went with Johnny, he really disliked him. It just wasn't happening with Tyner. Everything dried up. There weren't any gigs. We had recorded, and everybody passed on it. We were also dropped by Brass Ring, our management. So there was really nothing going on. I had met Johnny, who I had jammed with several years earlier in 1969, when he was in the Gold Brothers. At the time, my music teacher was in that band. They were playing on Plum Street at this old coffeehouse called the Red Roach, upstairs.

The men came together through a love of old R&B-infused rock. "It was kind of old Stones, but also modern-sounding, for the time," says the softly spoken Serafino. "A lot of people considered us new wave, and a lot of people considered us to be punk. Everybody had their own description of what that band was. Johnny came to the band with a whole handful of songs that he had been working on prior to the Torpedos, and we ended up putting them together. Plus we wrote another half dozen with this lineup."

"Johnny was a really good harp player," Gillespie adds. "We wanted to use that."

The studio output of the band stops at one single and an EP, 1979's Pop Star (although all of that material and some live stuff was compiled in 2000 for a CD called No Refills), but, like the Sonic's Rendezvous Band, the band's reputation was built through its live shows. "We did some big shows at the fairgrounds and at Harpo's where there were a lot of people," Gillespie says. "The main thing, though, is that I just watched the whole thing grow. At first, there was nobody there, and in 18 months, every gig was always packed. It was a house filled with our fans, all the time."

Despite popular opinion suggesting that Detroit went through a dry period musically in the '80s, Serafino insists that there was plenty going on. "There were so many more places to play and scenes going on all over town with different types of music.

"The big band here in town was the Romantics," Gillespie says. "We opened for them at the Masonic. That was cool. We did another show with them in Cleveland and some in Canada."

In just three short years, the Torpedos became one of the hottest tickets in town, and then it was over. Just like that. "Three or four hundred people per gig," Gillespie says. "At the Red Carpet, the Silver Bird, lots of clubs. The City Club Downtown. One gig where they did not like us — we played at the Center Stage opening for Humble Pie. It was a real hard rock and metal audience. We were too new wave for them. They did not like Johnny Angelos. They were throwing things at us.

"Word had it that we were the next band to get a major deal after the Romantics got signed and were on their way," Serafino adds. "But Johnny got lured away and broke the band up, right at the peak of when it was just about to happen."

Johnny Angelos is one of those tragic, enigmatic rock 'n' roll figures — a man who created fantastic music but left a trail of chaos in his wake. His former bandmates certainly have mixed memories. "He was afraid of success, I think," Gillespie says. "He quit every band he ever had.

A few years after the Torpedos, the singer killed himself, in his car in the garage at home.

"He was just an unhappy guy," Gillespie continues. "He was into heavy drugs, but I don't need to go any deeper into that. He and I wrote songs so easily. I would start playing, he would open his mouth and words would just roll off his tongue."

For a long time, that was that. The surviving Torpedos played around town separately, keeping themselves busy with a variety of musical projects. Then, in '99, they decided to get back together for a show. That turned into an annual thing, and now they do it bi-annually. On vocals is Johnny's son, Mitchel Angelos, who both Gillespie and Serafino agree does a good job with such big family shoes to fill.

So, with the band sounding good and playing relatively regularly, are the Torpedos finally putting out an album? "I'd have to say no, unfortunately," Serafino says. "Me personally, I would like to see that happen as this is a readymade band. I'm the kind of person who would like to do something like that. I'm not sure that will ever happen, but I'll try to. I'd like to see what this band sounds like in a studio with Mitchel. That would be remarkable."

Gillespie is even vaguer. "I don't know. Maybe I would. Actually, I would like to put out a DVD. I have this live show from Harpo's in '81 and it was right near the end. It's very good. We look great. Nowadays, with ProTools and everything, I'm sure we could make it look fantastic and sound great. I would be into a single or something. Actually, I've got some songs that he and I wrote that were never done. So who knows? Maybe in the future."