Book of verse recognizes change and loss, finds richness in what’s left behind. 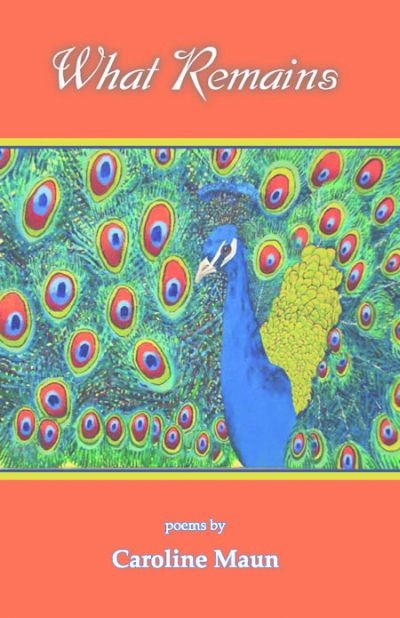 An 80-year-old maple falls across four city lots, missing the houses. The intake of breath as one realizes one is spared, the wonder at windows suddenly filled with leaves and a sidewalk levered like Styrofoam, the amazement of neighbors, the acknowledgment that, yes, things age and die and one adapts and goes on — such moments of recognition and acceptance typify Caroline Maun’s new poetry collection, What Remains.

The world of these poems is familiar yet somehow askew. Swarms of ladybugs suggest pomegranates, rubies and, surprisingly, empathy. The speaker steps off her bicycle to discover she has smashed a baby chickadee under her foot. “Google Street View (2009)” shows the porch, its flowers and the chair where her mother would sit, watching traffic and smoking. The speaker cannot quite make out whether a cigarette is still burning on the ashtray. Perhaps her mother just stepped away for a moment.

The chickadee lies not far from the spot where the mother took what became a fatal fall, and the mother’s absence inhabits every line of these poems. What Remains begins and ends with the vase selected to contain her ashes, a modest but elegant vessel into which she slipped, “raising only a shadow of dust.” But she is more than a shadow. One of her paintings adorns the book’s cover, a vibrant peacock painted on a dare posed by “a drunk friend at a bar” because she was “never one to take a dare lightly.” Love That Pink, the lipstick to which her mother “swore allegiance,” is worn in her memory by a friend who says, “She knew what she wanted, your mother.”

The mother’s gifts as an artist have been translated through her daughter’s meticulous gaze. We see the Packard-like headlights on the face of the female mantis that will soon “cradle” then snap off the head of the male. The Venus flytrap enjoys “a little meat, preferably/with a side of struggle.” Wayne State English professor Dr. Kathryne Lindberg, whose 2010 disappearance and death rocked our community, would probably have enjoyed the wry yet terribly sad title of Maun’s “Does She or Doesn’t She?” — the catchphrase from Clairol advertisements. Did she or did she not intentionally jump off the Belle Isle bridge that cold December morning? The hair, when the body is found months later, is brown, not Lindberg’s trademark blond.

Maun considers the smallest things with seriousness and respect. The point of view is sober, witty, sensuous, not self-pitying. “Love,” she tells us, “infuses the things we make/with beauty.” Maun’s poetry shows us how to “shoulder the burden” (as her mother did so bravely during her last moments) and carry on.

Terry Blackhawk is a Kresge Arts in Detroit Fellow and founder and director of Detroit’s InsideOut Literary Arts Project. Send comments to letters@metrotimes.com.