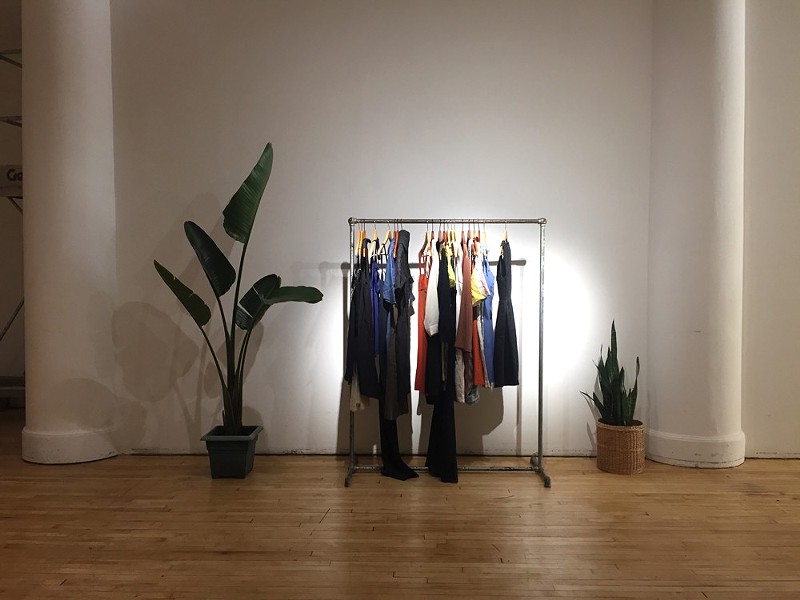 On an unseasonably warm and windy day last week, we hauled it over to Eastern Market where Miriam Pranschke and a crew of friends were working diligently to get 1440 Gratiot Avenue ready for a Saturday grand opening. The space was filled with construction equipment, but the shop owner assured us the work was almost done.

For the past year, Pranschke has been renovating the 500-square-foot space located on the ground floor of the old Atlas Furniture building, a structure on Gratiot Avenue that's been around since the early 20th century. Friends and family helped them sand layers of paint off original hardwood floors, remove bits of crumbling ceiling, and construct one-of-a-kind steel shelving — all in pursuit of creating a space to sell curated consignment.

Though the shelves were bare when we met with Pranschke, the stock she described to us is not the vintage fashions Detroiters have come to expect in resale settings. Instead, she's focusing on current style trends, well-made items, and unique finds. She will sell some high-end labels here, but that's not her main focus. She says price points will be between $20 and $30, with some lower-priced items available and some unique, high-end items going for more than $100.

Pranschke has been amassing a collection of gently used clothing and accessories for years, and much of that stock will fill Boro to start. After those items are gone, however, she says she'll focus solely on goods consignors bring to the shop.

"I want people to bring their stuff here," she says, noting she'll sort through items and select those she feels will sell.

Consignors will get 40 percent of the item's sale price, and they'll be offered an opportunity to give back too. They can offer all or a portion of their sales to the concept, which Pranschke is calling Community Threads. Those proceeds will then go to a charity of her choosing. The charity will change as often as month-to-month or as rarely as twice a year, according to Pranschke. She says she'll likely pick Alternatives for Girls as Community Threads' first recipient.

"I wanted to give back in a bigger way than just donating bags of clothing," she says.

While some resale shop owners have a passion for bygone trends, Pranschke's focus is a little different. Coupled with a focus on contemporary styles, she's hoping to curb the epidemic of clothing waste happening around the world.

"We focus so much on what we put in our bodies and being healthy in that way," she says. "But we should also care about what we're putting on our bodies and how we are caring for the people who make these products."

It's no secret that the sale of $10 skirts is only made possible by sweatshop workers who endure fetid conditions and long hours, only to be rewarded with a miniscule paycheck and the likelihood of developing a debilitating respiratory disease like silicosis ,which eventually leads to death.

"Clothing costs more when people are paid well. We have to start caring about people involved in making clothes," Pranschke says.

This concept is reflected in the name, which comes from the Japanese term boroboro. The word, which translates to tattered or repaired, refers to a type of clothing that was created from scraps of old garments and pieces of leftover fabric. Pieces were patched and resown, passed down through generations.

"There is an inherent beauty in things that are old," Pranschke says. "They have stories."

The sentiment rings true on a block that's recently seen a revival. Just around the corner from the sheds of Eastern Market, the strip is home to Detroit Candle Co., Trinosophes, Antietam, Well Done Goods, Inner State Gallery, and others. This week Boro and a "campfire concept" called Gather join their ranks.

As the world moves toward life via the internet, opening a brick-and-mortar shop can seem risky, but Pranschke feels differently.

"There's always going to be a place for local businesses," she says. "And this type of business will thrive in good and bad economic times."