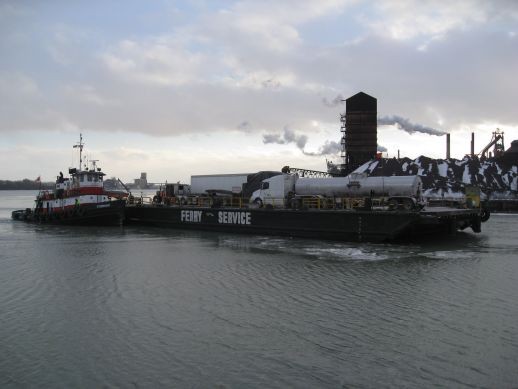 There are two family-owned businesses that provide a way to move trucks across the river between Detroit and Windsor. One is big, well-known and politically powerful, the other small and relatively obscure.

Now one of them is seeking a regulatory change that, if approved, would likely put the other out of business.

Should the rest of us care?

The Detroit International Bridge Company, which owns the Ambassador Bridge and is controlled by billionaire Manuel “Matty” Moroun and his family, is currently prohibited from allowing trucks carrying hazardous materials from using the aging span that connects Detroit and Windsor.

That’s been the law since the Ambassador Bridge was built in 1929.

Because trucks can’t use the tunnel running under the Detroit River, the only legal way to transport hazardous materials across this crucial border crossing is the Detroit-Windsor Truck Ferry, located near Zug Island, downriver from the Ambassador.

John Ward and his son Gregg started the ferry operation on Earth Day in 1990.

“We chose this start-up date … to symbolize our commitment to environmental stewardship and a belief that marine transportation can reduce highway congestion, air pollution and consumption of finite fossil fuels,” Gregg Ward told Congress back in 2007, when he offered testimony about border security in regard to transportation issues, calling for more government oversight.

At the time, he pointed out the risks inherent in having a private company controlling a link as vital to trade and the economy as the Ambassador, which carries 25 percent of all the goods moving across the border between the United States and Canada.

In that regard, nothing has changed in the five years since Ward made that testimony.

Those of a cynical bent could see the ferry service’s objections to the plan as being self-serving. Certainly, Gregg Ward doesn’t pull any punches when asked what would happen to his family’s business if the Ambassador is opened up to trucks carrying the sorts of hazardous materials — explosives, gases, flammable substances, poisonous materials and more — that currently come across the river on his company’s barges.

“It would put us out of business,” Ward says.

So, sure, there is self-interest involved.

But if you ask the people of southwest Detroit about the two family-owned companies, most will likely say the same thing as community activist Deb Sumner.

The owners of the ferry service, she says, are model corporate citizens.

And the bridge company?

We called bridge company president Dan Stamper for comment, but he didn’t get back to us. That could be because, like Sumner, we here at the Hits have long been critical of Matty Moroun and his minions.

Besides that, self-interested or not, Ward raises points that are undeniable. Among the most pertinent of them is this: As it is now, the only thing that keeps the Detroit International Bridge Co. from having a complete monopoly over cross-border truck traffic between Detroit and Windsor is the ferry service. Without those barges going back and forth, there would be no other option.

And that, from any perspective other than that of the DIBC itself, can’t be seen as a good thing.

When the bridge was temporarily shut down immediately after the 9-11 terrorist attacks, the ferry kept operating, prompting General Motors to write a letter to U.S. customs officials, stating, “The Detroit-Windsor Truck Ferry became our only alternative that would enable General Motors to continue operation of the Detroit/Hamtramck Assembly Plant.”

More recently, the ferry was able to keep trucks moving across the river when the Ambassador was temporarily closed after receiving a bomb threat last summer. The same thing was true just last week as hundreds of people participating in the Idle No More protests, taking place across Canada to support First Nations rights, “gathered at the Ambassador Bridge to temporarily snarl transport-truck traffic at the busiest border crossing in the country,” according to a Canadian Press report.

It is called “redundancy,” and the need for it is one of the primary reasons the state of Michigan, along with the Canadian government, are pushing ahead with plans to build a new publicly owned bridge near where the ferry is located.

The ferry also allows for the transport of things too big or heavy to cross the Ambassador, such as auto company presses and massive wind turbines.

So you don’t need to be the owner of the ferry to see that its service is a vital one, and that its loss would pose a real threat to Michigan’s economy.

But there’s more to the issue than just that.

Among those expressing concern over MDOT’s recommended approval of the bridge company’s proposal is state Rep. Rashida Tlaib, a Democrat who represents southwest Detroit.

“Given the age and security requirements of the Ambassador Bridge, opening it up for transport of dangerous hazmat, as the [MDOT] report suggests, endangers the public,” Tlaib warned in a message sent to constituents.

The crucial thing here is that approval hasn’t yet been granted. Tlaib is calling for a public hearing to be held before any decision is made. That seems likely to happen.

In addition, the public comment period remains open. If you’d like to weigh in, contact Robert H. Parsons, Public Involvement Officer, MDOT, PO Box 30050, Lansing, MI 48909. Parsons can also be reached via email at parsonsb@michigan.gov and by fax at 517-373-9255.