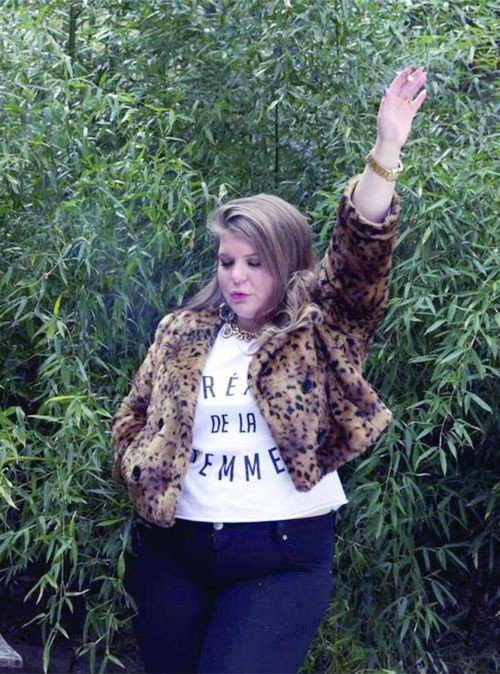 Breezee One is the rap pseudonym of Brittany R. Badenoch, a sassy Detroiter who is female, white and, by her own admission, “a bigger girl.” She’s doesn’t fit, by any stretch of the imagination, the typical rap profile, but that’s exactly why she’s so fascinating. Her sound is both fresh and classic, with hints of Betty Boo, Fergie and Salt-n-Pepa splashing around in there. To her immense credit, the quality of her rhymes is such that gender and race — and certainly her weight — matter not. This girl is getting out there and doing what she wants, and she’s doing it on her terms.

Breezee says she started rapping in 2007. “I’d always really liked rapping along to my favorite hip-hop albums, and I was always really good at it,” she says. “Like, I could always pick up on every word and my friends would comment about it, but I never really thought anything of it. I utilized that as my creative outlet and it’s worked out for me. I really started taking it seriously this past two years. Before that, it was a hobby, I guess.

“I went to high school with the Scrummage Crew. They were always in bands, and I always wanted to make music, but I don’t play instruments. I didn’t know what I was going to do with that, so I just decided to write a couple of rap songs and see how that worked out. I played a show, which led to other shows.

“Up until recently, it was kinda just for fun, I really liked to perform and the fact that I was making and creating my own stuff. Now, I realized that it’s my favorite thing in the whole world to do, so I’m running with it.”

Ah yes, the Scrummage Crew. The collective that includes, obviously, Lord Scrummage among other bands, has made it its business to help out all manner of oddball musicians around the region.

“It’s not just Scrummage,” Breezee says. “I think that Detroit has such a supportive community, especially the music community. Scrummage is definitely my foundation that helped create my music, offer venues to play at and whatever. That really helped me out when I started, and those guys support the Breezee One philosophy.

“I have a Scrummage tattoo, actually. I really owe a lot of who I am to being friends with those guys from way back in the day until now. I’ll always consider myself a Scrummage founding father, or mother, or whatever.”

Breezee says she has been hooked on rap since picking up Young MC’s Stone Cold Rhyming album in 1990. “I had that CD memorized from the first day I got it,” she says. “I still like it — it’s a great album. I really have always appreciated Biggie Smalls, Tupac, Wu-Tang — those are the more commercial artists that I was exposed to as a young kid.

“I love all types of music though. In every type of music, there are at least a few musicians that I’m really influenced and inspired by. Jazz, hip hop, new wave, techno, everything. Detroit music, in particular, has always been a huge influence. J Dilla, Slum Village, the Bruiser Brigade, and all of that type of hip hop — always propelling me and inspiring me to create more. The heart of hip hop lies in Detroit and continues to grow here.”

“There are people who embrace that and want to help me grow, and then there are other people that don’t really know what to make of it. They’ve never seen a white girl rap before and their jaws drop. The biggest part of my message that I hope to get across to them is, ‘Yeah, I’m a white girl, and I’m a bigger white girl at that, and I’m still fearlessly pursuing something that, in the world’s mind, isn’t the most fitting scenario.’”

That level of support, respect and appreciation could be seen vividly on April 20, when Breezee had her album launch party for her Crème de la Femme debut at the Old Miami. “It was an amazing show,” she says. “It sounded phenomenal. I had dancers, a whole stage presentation, lasers, the sound guy was on point, it was a packed house — it was just an amazing show and I was on top of the world after playing it.

“When you make an album and put all of that work and money into it, it’s stressful and then it culminates and it’s an awesome feeling. The reaction has been really positive. I’ve noticed that a lot of the shows I’ve played since the album release have had a lot of new faces in the audience, and a lot of people I’ve never seen in my life. That’s been cool for me because I never want to get pigeonholed into, ‘I’m a rapper so only hip-hop heads are going to like me.’

“I realize that there are tons of middle-aged women and men all over the country who identify with the Breezee One message. There’s a female mountain biking group in Oregon and their theme song is my ‘Bike Chase’ song. They listen to it to get pumped up or when they’re getting tired. That’s amazing to me.”

The rapper mentions the “Breezee One message” more than once during the interview; what the fuck is that?

“Finding whatever it is that makes me the happiest and fearlessly presenting it to the world,” she says. “It’s ever-changing. I guess the message is to take my example. I’m not the most cookie-cutter person for this position, but I’m doing it so you should find what you like to do and do it too.

Well, obviously there have to be a few weed songs in there. We get to hear them this weekend, when Breezee One plays the S’MittenFest show at the Magic Stick.

“I am going to have some dancers, and some other surprises,” she says. “ … it will be a very transformative show … and they’ll all want to buy my new album.”

You have to love the blatant plug at the end there. And when that’s done? “We can have an afterparty at my crib,” she says. “I’ll definitely be making more music videos this summer, and I’m hoping to play Dally in the Alley and CMJ in New York. I would like to go on tour soon. Everything is on the horizon for Breezee One.”