Brunch around the world at these metro Detroit spots 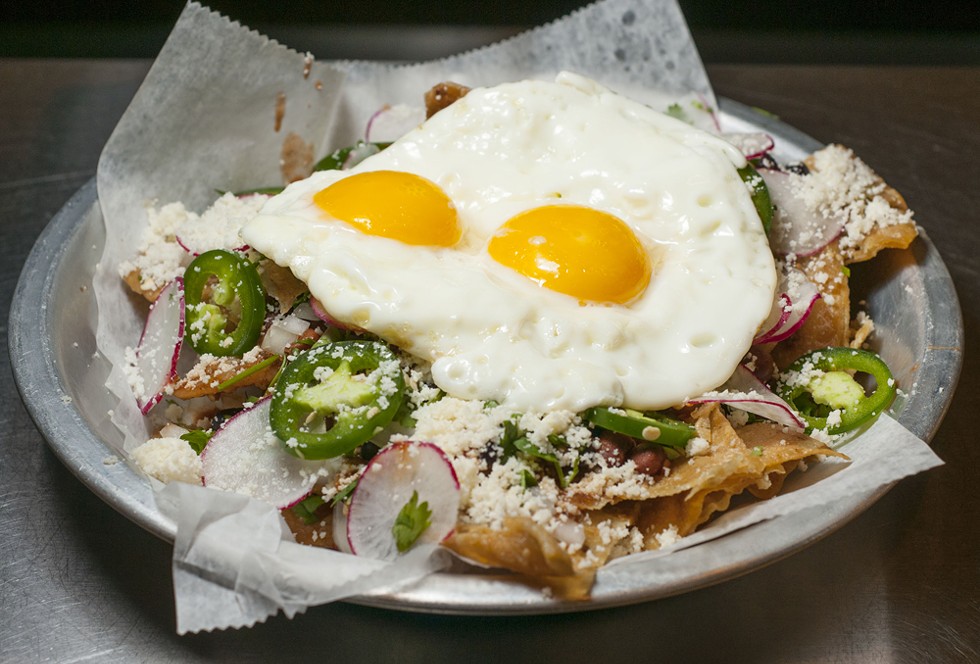 By now, you've possibly blown through metro Detroit's biscuits and gravy, you've toppled all of the region's short stacks, and you've found the perfect poached eggs. You've run the omelette roster from top to bottom, and maybe you even hold the record for most Bloody Marys consumed during the Sunday bottomless Bloody special. It's all fun and good, but sometimes the brunch menus can start to blend together and you've just got to break free of that weekend morning routine. Fortunately, metro Detroit is filled with diverse cuisine that's got brunch built in. These are the restaurants where you can turn to for a different approach to brunch.

Venezuelan arepas
One of the staple dishes and great joys of Venezuelan cuisine are arepas, cornmeal cakes that are grilled, baked, or fried. They essentially function as Venezuelan bread and hold anything from stewed beef to eggs to gobs of melted cheeses to simple and salty pork to avocado. And in Venezuela, arepas are a breakfast, lunch, and dinner dish — one report estimates that Venezuelans consume 750 of them annually.

You can get your two per day at Detroit-area restaurants like El Rey de las Arepas in Southwest Detroit or Garrido's in Grosse Pointe, which allows you to pair the arepas with traditional American breakfast dishes like bacon and hash browns.

Yemeni foul and fassolia
In Yemen, breakfast is an all-day affair, and two of the standards are foul or fassolia. The dishes are identical except for the color of the beans: brown favas in the foul, white beans in the fassolia. Each is under $10 for a plateful, and arrive as a filling, solid mass of beans mashed with tomato paste, garlic, onions and tomatoes and, optionally, eggs. You can spice it up with the fiery tomato "salsa" that's common in Yemeni restaurants, like Sheeba, Remas, or Yemen Cafe in Hamtramck, or Sheeba Express in Detroit (no relation to the Hamtramck Sheeba).

Mexican chilaquiles
In their best iterations, chilaquiles are a layered dish composed of some combo of fresh fried, crunchy tortilla chips, cactus, chopped cilantro, red onion, and crunchy jalapeños — wetted with tomatillo or some other punchy salsa. That's all topped with fried or scrambled eggs, and at spots like O.W.L. in Royal Oak, the mound is crowned with a dusting of salty Mexican cotija cheese. Alternatively, head to Southwest Detroit and find them along with breakfast burritos and scrambled eggs and cactus dishes at Evie's Tamales, or any number of other Mexican spots.

Vietnamese pho
Pho is actually a breakfast dish in Vietnam — that's why the pho parlors of Madison Heights often open and fill up early. Among the best pho in town is the Pho Dac Viet — a wild bowl with tendon, tripe, meatballs, flank, and brisket that's served at Thuy Trang in Madison Heights. If intestines and tendon (which dangles like a deranged piece of calamari from your chopsticks) are too much for your taste, you can mix and match any of the aforementioned beef cuts at most Vietnamese restaurants. Among the best and simplest are the pairing of tender, flavorful brisket and thin-sliced eye round. And all pho bowls come with a portfolio of bean sprouts, jalapeños, lime, and green herbs, like cilantro and basil, that should be torn up and dropped in as you go.

Bosnian and Albanian burek
These hearty Bosnian and Albanian delicacies found around Hamtramck are made with either ground beef or cheese that's folded into layers of thin philo dough and baked to a golden brown. It's an all-day snack or meal in the former Yugoslavia, but is considered primarily a breakfast dish. On some mornings at Family Donut in Hamtramck you'll also find slices of burek pie, and there's an ongoing debate in the city about whether Family Donut, Euro Mini Mart, or American-European Market procures the city's best burek. Regardless of which option you choose, there's a mouthwatering treat that has been described as a reviving godsend by its fans.

Chinese dim sum
Dim sum translates as "a delight of the heart" and refers to the succulent dumplings and small plates of food — noodles, ribs, vegetables, soups, and appetizer-portions of entrées. More specifically, think of braised short ribs or garlic chive pancake, which is a small cushion of soft dough that is filled with bright green garlic chives and pan-fried at East Lake Chinese in Troy. Or the steamed pork skin soup-filled dumplings that are served by the half dozen at Shanghai Bistro in Windsor. In some Chinese restaurants, servers pass with rolling carts or trays — you pick what you want, and the servers keep track of how many plates you've snagged, usually charging $3 a plate.