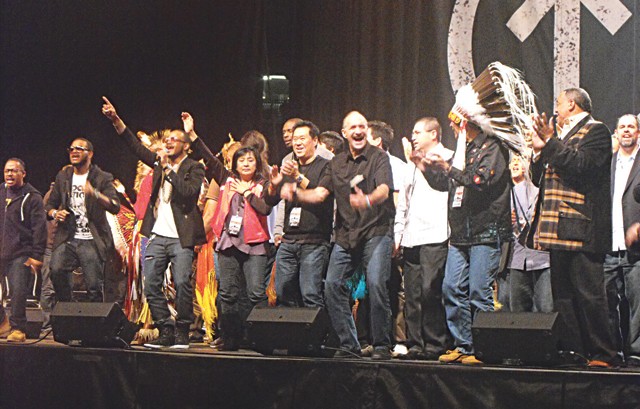 The call went out, and News Hits answered. Or make that The Call, as the organization founded by the self-described "visionary" Rev. Lou Engle is known.

Engle brought his traveling revival show to Ford Field last week for a 24-hour Jesus-fest that included much music and a whole bunch of preaching. Signals from the divine most have gotten crossed somewhere, though, because organizers were apparently expecting upwards of 50,000 people to attend the free event but we'd guess only between 5,000 to 10,000 actually showed up.

Given Engle's history of demonizing — literally — Muslims and gays because they don't adhere to what he and other like-minded fundamentalist Christians believe to be the word of the God, the fact that Ford Field wasn't filled to the rafters can — in the eyes of the more liberal among us — be considered a good sign.

We weren't there for the entire 24 hours of prayer and fasting, but in the time that we did attend, we didn't hear much condemnation — although, not surprisingly given the nature of the event, there was much rhetoric being delivered regarding the sanctity of the unborn lives and the need to combat abortion.

We were a bit surprised to see the stage filled with Native American musicians and dancers in full regalia on Friday night. Given the harm inflicted on native peoples by Christians — including the wide-spread suffering at church-run boarding schools that went on for a century (which was the subject of a recent Metro Times cover story) — we didn't expect to see so many indigenous people so high on Jesus. Nor were we quite prepared for the abundant blowing of what appeared to be animal horns, as if participants we're again trying to bring down the walls of Jericho. For a moment there, we thought we'd mistakenly stumbled into a game between the Lions and the Minnesota Vikings, so clamorous was all the horn blowing.

But even pagans like us could see that the high-tech extravaganza had a profound effect on many of its participants. We could see them dancing, hands held aloft, faces rapt, tears of ecclesiastical joy streaming down their cheeks.

"There is such a sweet spirit here," Pastor Walter Moss from Canton, Ohio, told us. "There are people of all different colors here, all different nationalities. There's been nothing negative at all."

Then he made reference to the city of Detroit, and the difficulties it is facing. And in that moment, he expressed a sentiment that the Occupy Detroit protesters a block away could whole-heartedly embrace.

"In the midst of the financial situation we are in," said the pastor, "there is hope."