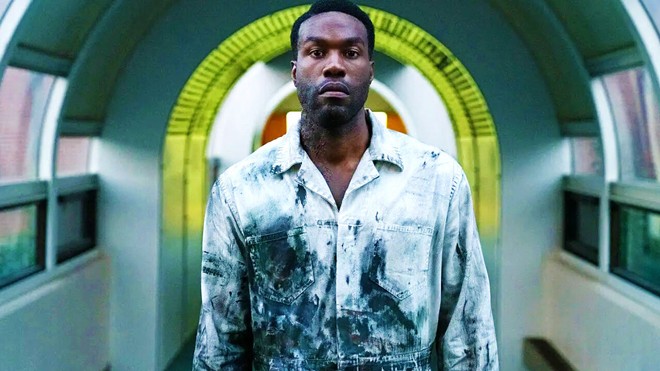 The strings run right to the head for each shadow puppet supplying exposition in Nia DaCosta's Candyman. Prominent in the trailer, the closing credits, and the film's many explainer sequences recounting the original 1992 film, these strings provide a suggestion — and a strong one — of the guiding hand that moves these figures through their paces. While her human actors aren't so directly guided, DaCosta's hand is likewise visible in puppeteering them, too; they move through her film largely to connect narrative dots to one another in service of a social parable — and at the sorry expense of a thoroughly or credibly demonstrated inner life.

Bernard Rose's 1992 movie of the same name, starring Virginia Madsden as Helen Lyle, a graduate student guided by a naive and ultimately insatiable curiosity, found her exploring the cavernous halls and courtyards of Cabrini-Green, which most readers will know from life if not these films as one of Chicago's most notorious housing projects. As an up-and-coming, educated white woman eager to study the roots of a popular ghost story and violent urban legend, Lyle appears driven as much by pursuit of her thesis as she does by a desire to confront the fears she's supposed to have: of being out in the city alone, of venturing into the projects, of moving through and working in a lower-income Black milieu. A semiotics student working in a fairly troubling anthropological mode, her initial forays are notably tempered by the advice of Bernadette Walsh (Kasi Lemmons), a Black classmate and her partner on the project. While eager to tug at the corners of a legend she too finds suspect, Walsh proceeds with a sense of caution, declining at every turn to plunge her nose as deeply into things as Lyle does. Without underlining things overmuch, Rose makes clear through his writing and direction that Lyle acts not only from a sincere (if academic) curiosity, but from both a kind of white entitlement and a feminist desire to push hard against expectaton and all manner of constraint. Like most people, she's neither innocent nor blameless.

In DaCosta's new sequel, the investigator role is taken up by Anthony McCoy, played by Yahya Abdul-Mateen II, a Chicago native and rising painter who shares a fine condo atop the old grounds of Cabrini-Green with Brianna (Teyonah Parris), his art curator girlfrend. For Anthony, the lurid Candyman legend provides what he thinks could be a source of fruitful aesthetic inspiration. After running a Google search, he pokes around the area for research. Looking about as out of place as Lyle did in the first film, he scans as inquisitive but also an opportunist, digging for a hook that might help him further a stalled painting career and traversing the now-gentrified neighborhood's green lawns, new construction, and some few abandoned, graffiti-encrusted projects. Moving as though hypnotized, his inquiry is both stranger and less transgressive than Lyle's in that there's hardly anything physically there to investigate, too little left that's notable about the area's physical terrain — leaving him to ply the same old aging local (Colman Domingo) for recounted memories of a long history of Black pain.

The result leaves little for DaCosta to make of his digging but a thin (if fair) visual characterization of Chicago's recent development, with wide tracking shots of the cranes building a sleeker, more profitable version of the city up as Anthony crosses frames in trancelike profile. Though DaCosta works to suggest the space is haunted, the film's hampered by the city's vacant air, the lack of people around a bustling city to extend this forgotten urban legend. But that's also part of DaCosta's point here — that the people, like the structures that once inhabited this space, have been for the sake of those in power scattered, forgotten, erased. For people who actually live in cities, these class-based and racial dynamics should be nearly as obvious as they are brazenly enforced.

But what sense can artists make of this history? That's the best challenge the film's writing team (DaCosta, Win Rosenfeld, and Jordan Peele) have assigned themselves alongside the dutiful task of franchise maintenance, with all threads running through Anthony as the instrument of these inquiries and designs. When he shows a gallery piece to a sneering white critic who dismisses it as "clichéd," the film poses territorial aesthetic questions with some meat to them, asking whether a story of historical trauma Anthony didn't experience firsthand — even as a Black man — is really his to tell. The question bears naturally on the film, and over time DaCosta finds a fairly elegant way to cast this history as his to plumb: a unifying form of poetic and cultural sense-making I wish the film had focused more on.

But DaCosta's effort isn't as much about finding ways to navigate an intricate and plainly unjust history as it's about drawing clean, glowing lines which situate the first film tidily within a broad summary of Black trauma past and present, with plainly marked opposing sides. Echoing the motif of shadow-plays, this history's delivered with a clean and recitative didacticism that belies its nods to oral history, offered less like a campfire tale than a parable to children. If ambiguity has a home in this iteration of Candyman, it lies with Brianna as Anthony's supporter and companion, working to move away from bleak history as he walks slowly towards it; dependent on his pursuits to further her own career, she wants nothing more than to move up and forward, beyond an immediate legacy of Black familial tragedy and strife.

The trouble isn't that DaCosta's conclusions, ideas, or placement of blame for Black suffering on white supremacist power structures (especially policing) are in any way wrong — it's that her treatment, in being eager to essentialize, lacks sorely in powers of suggestion, attention to ambiguity, or willingness to take the risk of confusing a viewer. (The appearance of so a rhetorically ambiguous a figure as a Black cop, for instance, would probably require a lengthy explanation.) When Tony Todd's Candyman pulls at his chest in the franchise's first film, it's to reveal a wound festering with swarms of live bees — the deathless, everlasting sting suggested evocative of centuries of racial wounds. His vengeance proves just as rough, unkind, and raw, with him lashing out at babies, mothers, and dogs, expressing a rage that's irrepressible, life-giving, and impossible to control, rippling out to maim even the most unlucky and undeserving. But in DaCosta's treatment, Michael Hargrove plays (one quick cameo exempted) a far cornier avatar, meting out punishment all but exclusively towards smarmy, casually racist or gentrifying whites (and mostly white women): gallerists, school-age brats, and latte sippers who say Candyman's name, accidentally summoning him in straining to get off on their own sense of power.

The result might be cathartic, sure, but the film's procession of methodical executions don't have a lot to tell or share — nor are they delivered with great effect. As exercises in gratuitously underlining what other parts of the film, and everyday life, should already make plain, these scenes — moments which should cut the sharpest onscreen — are dulled for falling along such predictable, retributive, and glaringly unambiguous lines. In lacking an animating mystery, thematic question, or good enough style to justify their slaughter, Candyman's carcasses hit the ground without much resonance; each killing reads more like a job than a source of pleasure, righteous vengeance, or release. Unwilling to risk the aesthetically or morally untidy, DaCosta's CGI bees don't just look bad — they lack sting.

Candyman is not showing in any theaters in the area.